[pēr´e-od]
an interval or division of time; the time for the regular recurrence of a phenomenon.
absolute refractory period the part of the refractory period from phase 0 to approximately −60 mV during phase 3; during this time it is impossible for the myocardium to respond with a propagated action potential, even with a strong stimulus. Called also effective refractory period.
blanking period a period of time during and after a pacemaker stimulus when the unstimulated chamber is insensitive to avoid sensing the electronic event in the stimulated chamber.
effective refractory period absolute refractory period.
ejection period the second phase of ventricular systole (0.21 to 0.30 sec), between the opening and closing of the semilunar valves, while the blood is discharged into the aorta and pulmonary artery. Called also sphygmic period.
gestation period see gestation period.
incubation period see incubation period.
isoelectric period the moment in muscular contraction when no deflection of the galvanometer is produced.
latency period
1. latent period.
2. latency stage.
latent period a seemingly inactive period, as that between exposure to an infection and the onset of illness (incubation period) or that between the instant of stimulation and the beginning of response (latency, def. 2).
refractory period the period of depolarization and repolarization of the cell membrane after excitation; during the first portion (absolute refractory period), the nerve or muscle fiber cannot respond to a second stimulus, whereas during the relative refractory period it can respond only to a strong stimulus.
relative refractory period the part of the refractory period from approximately −60 mV during phase 3 to the end of phase 3; during this time a depressed response to a strong stimulus is possible.
safe period the period during the menstrual cycle when conception is considered least likely to occur; it comprises approximately the ten days after menstruation begins and the ten days preceding menstruation. See the section on fertility awareness methods, under contraception.
sphygmic period ejection period.
supernormal period in electrocardiography, a period at the end of phase 3 of the action potential during which activation can be initiated with a milder stimulus than is required at maximal repolarization, because at this time the cell is excitable and closer to threshold than at maximal diastolic potential.
vulnerable period that time at the peak of the T wave during which serious arrhythmias are likely to result if a stimulus occurs.
Wenckebach's period a usually repetitive sequence seen in partial heart block, marked by progressive lengthening of the P–R interval; see also dropped beat.
Miller-Keane Encyclopedia and Dictionary of Medicine, Nursing, and Allied Health, Seventh Edition. © 2003 by Saunders, an imprint of Elsevier, Inc. All rights reserved.

1. the period elapsing between the application of a stimulus and the response, for example, contraction of a muscle;
2. Synonym(s): incubation period (1)
Farlex Partner Medical Dictionary © Farlex 2012

(lā'tĕnt pēr'ē-ŏd)
1. The duration elapsing between the application of a stimulus and the response, e.g., contraction of a muscle.
2. bioterrorism Interval between exposure to a chemical, toxic, or radiologic agent and the first signs or symptoms.
3. Synonym(s): incubation period (1) .
Medical Dictionary for the Health Professions and Nursing © Farlex 2012 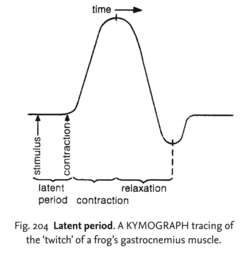 Fig. 204 Latent period . A KYMOGRAPH tracing of the ‘twitch'of a frog's gastrocnemius muscle.

Also called incubation period, the time between infection with a disease-causing agent and the development of disease.
Mentioned in: AIDS
Gale Encyclopedia of Medicine. Copyright 2008 The Gale Group, Inc. All rights reserved.

(lā'tĕnt pēr'ē-ŏd)
Duration between application of a stimulus and the response, e.g., contraction of a muscle.
Medical Dictionary for the Dental Professions © Farlex 2012

Feedback
Flashcards & Bookmarks ?
Please log in or register to use Flashcards and Bookmarks. You can also log in with
Flashcards ?
My bookmarks ?
+ Add current page to bookmarks
Mentioned in ?
References in periodicals archive ?
d10 plants per replication, index of aggressiveness = (percentage infection x sporulation density) / (latent period x dwarfing) (Sakr 2009, 2010, 2011a,b, 2012, 2014; Sakr et al.
Caracterizacion fenotipica en aislados de varias razas de Plasmopara halstedii (mildiu del girasol)
In this paper, we discuss an SEIR model that the diseases can be infected in the latent period and the infected period.
Dynamic analysis of an SEIR model with distinct incidence for exposed and infectives
In Lines 1, 2, 3, 45, 49, 52, 53, 55, 57, 58, 61, 63, 64 and 65 the first pustules were observed 10 days after inoculation, it was the lowest latent period among experimental lines.
Study of resistance components at seedling stage to stripe rust in some doubled haploid wheat lines
HIV/AIDS theory postulates a latent period of roughly 10 years between infection by human immunodeficiency virus (HIV) and the appearance of symptoms of acquired immune deficiency syndrome (AIDS).
Incongruous age distributions of HIV infections and deaths from HIV disease: where is the latent period between HIV infection and AIDS?
With the evolution of genotype 13 it has become apparent that blight is now more aggressive, it can grow faster, it has a shorter latent period and is possibly more active at lower temperatures.
Tough approach needed to beat the problem of potato blight; Farming
MPTP exposure at one point in time can be responsible for a progressive clinical syndrome with an intervening latent period.
The role of early life environmental risk factors in Parkinson disease: what is the evidence?
After eating the seeds or oilcakes, there is a latent period of 12 to 72 hours.
Pet watch
Both QTL for slow leaf-rusting detected in our study, QLr.osu-2B and QLr.osu-7BL, were also coincident with QTL identified previously for latent period (Xu et al., 2005).
Molecular characterization of slow leaf-rusting resistance in wheat
First, there must be a relatively long latent period between the beginning of treatment and the onset of the malignancy.
Curing cancer vs causing cancer
There may be a latent period similar to the asbestos problem, that didn't show itself at the time,but which we now know can be fatal.
Letter: Phone hazards
All participants had to have been enrolled in the HMO for at least 10 years, since it has been reported that there is typically a 7- to 10-year latent period prior to diagnosis of the disease.
Screenings Do Not Reduce Risk of Microvascular Problems
It has a latent period of up to 50 years and can occur even with light exposure.
MAGIC MINERAL WAS SECRET KILLER