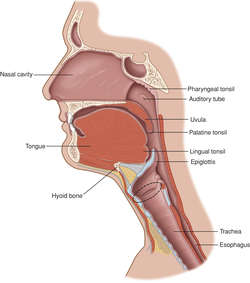 Feedback
Flashcards & Bookmarks ?
Please log in or register to use Flashcards and Bookmarks. You can also log in with
Flashcards ?
My bookmarks ?
+ Add current page to bookmarks
Mentioned in ?
References in periodicals archive ?
This is in addition to the limitations of their small sample size in that the radiologic evaluation of the joint was made on only 3 larynges.
Age-related changes affecting the cricoarytenoid joint seen on computed tomography
I activated the larynges of euthanized specimens with airflow, analyzed their acoustic output, and compared them to field recordings to determine (1) if variation in pulmonary pressure could produce a wider range of frequencies than observed in natural advertisement calls, (2) if variation in the produced sound frequency is correlated with sound intensity, and (3) if natural calls match the maxima of frequency and intensity obtained in the lab.
Is the frequency content of the calls in North American treefrogs limited by their larynges?
Case Age upon RDD Age upon Gender Onset of number diagnosis laryngeal RDD systemic (years) diagnosis symptoms (years) 1 27 28 M Cervical lymphadenopathy 2 34 36 F Cervical lymphadenopathy 3 39 41 M Nasal obstruction and cervical lymphadenopathy 4 38 38 M Cervical lymphadenopathy 5 45 45 F Hoarse voice, suffocation Case Sites of lymph number node involvement 1 Neck, axilla 2 Neck 3 Neck, axilla, groin 4 Neck, axilla 5 NA Table 2: The clinical features of larynges for the 5 RDD cases with laryngeal involvement.
Laryngeal Rosai-Dorfman Disease (Sinus Histiocytosis with Massive Lymphadenopathy): A Retrospective Study of 5 Cases
Ortug C et al reported six larynges having foramen thyroideum, one specimen had bilateral and five specimens had unilateral.
Foramen in the shield: foramen thyroideum
(15) Rifai and Khattab performed a whole-organ section study of 30 excised larynges with AC carcinoma, and they confirmed the presence of cartilage invasion in all studied specimens.
Pathologic evaluation of primary laryngeal anterior commissure carcinoma both in patients who have undergone open surgery as initial treatment and in those who have undergone salvage surgery after irradiation failure
(2) While I applaud the openness with which NATS has finally received (to the point of actually embracing) nonclassical singing styles, one result has been understandable confusion among our students about which direction the aesthetic winds are blowing, and therefore which direction they should send their collective larynges: down for classical, slightly elevated for CCM, or even higher for belt?
Graduation advice: doing versus having
In 1995, Shapshay et al reported the feasibility of endoscopic repair of large mucosal avulsions in live dog larynges. (4) For that experiment, they created 2 x 2.5-cm glottic and subglottic defects and then grafted buccal mucosa to these areas via endosuture and CO/laser welding.
Botulinum toxin-assisted endoscopic repair of traumatic vocal fold avulsion
Near to the larynges aditus numerous projections like lingual papillae were noted.
Estudio morfologico de la lengua de budgericar melopsittacus undulatus
I agree with the basic thrust of his article; it is imperative that we teach our students to sing with stabilized, slightly lowered larynges. Furthermore, his discussion of the lighter approach, especially for Rossini, is excellent.
Letter to the editor
(3) They cited postmortem studies by Roggli et al, (4) which noted that asbestos bodies but no dysplasia was found in the larynges of patients who had been exposed to asbestos.
Asbestos exposure and laryngeal cancer: is there an association?
Poor breathing technique, elevated larynges, hypernasality, slovenly musicianship, and egregious diction are rampant.
Chess and the art of voice pedagogy
However, the results do lend support to our experimental hypothesis that adverse physiologic phonation and respiration subsystem reactions would be provoked in dust-mite-allergic patients if their larynges were deliberately exposed to high concentrations of D pteronyssinus.
Effects of sequential Dermatophagoides pteronyssinus antigen stimulation on anatomy and physiology of the larynx