Patient care: major problems presented by the patient with non-Hodgkin's lymphoma include the management of side effects associated with treatment and the prevention of infection.
small lymphocytic lymphoma a diffuse form of non-Hodgkin's lymphoma with a low grade of malignancy; it represents the neoplastic proliferation of well-differentiated B lymphocytes and may present with either focal lymph node enlargement or generalized lymphadenopathy and splenomegaly. The predominant cell type is a compact, small, normal-appearing lymphocyte with a dark-staining round nucleus, scanty cytoplasm, and little size variation. It nearly always involves the bone marrow, and often malignant cells are found in the blood, so that its clinical picture is similar to that of chronic lymphocytic leukemia. Called also well-differentiated lymphocytic lymphoma.
T-cell l's a heterogeneous group of lymphoid tumors representing malignant transformation of the T lymphocytes. Types include convoluted T-cell lymphomas, cutaneous T-cell lymphomas, adult T-cell leukemia, and certain other conditions.
undifferentiated lymphoma malignant lymphoma composed of undifferentiated cells, i.e., cells that do not show morphologic evidence of maturation toward lymphocytes or histiocytes, which vary in size and may include bizarre giant forms.
well-differentiated lymphocytic lymphoma small lymphocytic lymphoma.
Miller-Keane Encyclopedia and Dictionary of Medicine, Nursing, and Allied Health, Seventh Edition. © 2003 by Saunders, an imprint of Elsevier, Inc. All rights reserved.

(lim-fō'mă),
Any neoplasm of lymphoid or reticuloendothelial tissues; in general use, synonymous with malignant lymphoma; present as apparently solid tumors composed of cells that appear primitive or resemble lymphocytes, plasma cells, or histiocytes. Lymphomas appear most frequently in the lymph nodes, spleen, or other normal sites of lymphoreticular cells; may invade other organs or manifest as leukemia. Lymphomas are now classified by histology, immunophenotype, and cytogenetic analysis, according to cell of orgin (B or T cells) and degree of maturation. The current World Health Organization (WHO) classification of lymphoid neoplasms is based on the Revised European-American Lymphoma (REAL) classification and effectively replaces older schemes such as the Working Formulation and Rappaport classification, which were based solely on morphology.
See also: International Prognostic Index.
[lympho- + G. -oma, tumor]
Farlex Partner Medical Dictionary © Farlex 2012

(lĭm-fō′mə)
n. pl. lympho·mata (-mə-tə) or lympho·mas
1. Any of various malignant tumors that arise from the lymphocytic cells of the immune system.
2. Any of various cancers characterized by the development of such tumors, especially Hodgkin lymphoma and non-Hodgkin lymphoma.
lym·pho′ma·toid′, lym·pho′ma·tous (-təs) adj.
The American Heritage® Medical Dictionary Copyright © 2007, 2004 by Houghton Mifflin Company. Published by Houghton Mifflin Company. All rights reserved.

(lim-fō'mă)
Any neoplasm of lymphoid tissue; in general use, synonymous with malignant lymphoma.
[lympho- + G. -oma, tumor]
Medical Dictionary for the Health Professions and Nursing © Farlex 2012 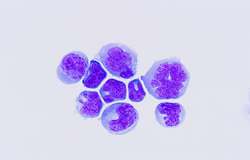 (lim-fō'mă)
Any neoplasm of lymphoid or reticuloendothelial tissues; in general use, synonymous with malignant lymphoma; presents as apparently solid tumors composed of cells that appear primitive or resemble lymphocytes, plasma cells, or histiocytes; appear most frequently in the lymph nodes, spleen, or other normal sites of lymphoreticular cells.
[lympho- + G. -oma, tumor]
Medical Dictionary for the Dental Professions © Farlex 2012

A. I have never ever heard or read anywhere about methadone causing anemia, nor is that something that an opiate medication would normally cause. We all have a tendency to blame everything that happens to us, health-wise, on methadone sometimes--but in this case, you probably need to look elsewhere for the cause.
the Anemia is probably due to the Lymphoma. if not-her life is out of balance, she might changed her diet and may have shortage of iron or B12.
More discussions about lymphoma
This content is provided by iMedix and is subject to iMedix Terms. The Questions and Answers are not endorsed or recommended and are made available by patients, not doctors.