[lamp]
an apparatus for furnishing heat or light.
Gullstrand's slit lamp an apparatus for projecting a narrow flat beam of intense light into the eye. See also slit lamp.
slit lamp one embodying a diaphragm containing a slitlike opening, by means of which a narrow, flat beam of intense light may be projected into the eye. It gives intense illumination so that microscopic study may be made of the conjunctiva, cornea, iris, lens, and vitreous, the special feature being that it illuminates a section through the substance of these structures. 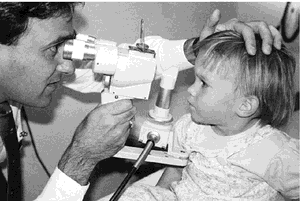 A device that generates light and/or heat
(2) LAMP
Neurology Acronym for Limbic system­associated membrane protein. A member of the IgLON (immunoglobulin LAMP, OBCAM and neurotrimin) subfamily of proteins within the immunoglobulin superfamily, which participate in regulating synapse formation in hippocampal neuron
Oncology Acronym for Locally Advanced Multimodality Protocol. A clinical trial that compared sequential chemotherapy (paclitaxel and carboplatin) followed by radiation therapy alone with (1) low-dose induction chemotherapy (as above) given weekly followed by concurrent chemoradiation and (2) concurrent chemoradiation regimen followed by consolidation chemotherapy (as above).
Segen's Medical Dictionary. © 2012 Farlex, Inc. All rights reserved.

[Gr. lampein, to shine]
A device for producing and applying light, heat, radiation, and various forms of radiant energy for the treatment of disease, resolution of impairments, or palliation of pain.

A lamp that develops a high temperature, emitting infrared rays; a heat lamp. The rays penetrate only a short distance (5 to 10 mm) into the skin. Its principal effect is to cause heating of the skin. 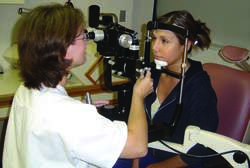 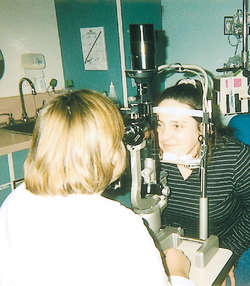 A lamp so constructed that an intense light is emitted through a slit; used for examination of the eye. See: illustration
illustration

Patients and operators must wear ultraviolet-resistant goggles during treatment. Overexposure to ultraviolet light produces burning and blistering of the skin and may predispose patients to skin cancers.

Any device that produces light or heat.
Burton lamp Ultraviolet lamp, including some short wavelengths from the visible spectrum (e.g. Wood's light), mounted with a magnifying lens in a rectangular frame. It is used primarily in the evaluation of the fit of a hard contact lens, in conjunction with the instillation of fluorescein into the eye. See staining.
filament lamp A lamp in which light is produced by electrically heating a filament, usually of tungsten. The filament is contained in a bulb in which there is either a vacuum or an inert gas. The emitted spectrum is continuous. See continuous spectrum.
fluorescent lamp Discharge lamp in which most of the light is emitted by a layer of fluorescent material excited by the ultraviolet radiation from the discharge (CIE). See fluorescence.
halogen lamp A tungsten filament lamp in which the glass envelope is made of quartz and is filled with gaseous halogens. This permits a higher filament temperature and consequently provides a higher luminance and a higher colour temperature as well as a longer operating life than a conventional filament lamp of the same input power. Halogen lamps are used in some ophthalmoscopes and retinoscopes and as very bright sources for people with low vision. Syn. tungsten-halogen lamp.
incandescent electric lamp Lamp in which light is produced by means of a body (filament of carbon or metal) heated to incandescence by the passage of an electric current (CIE). See incandescence; luminescence.
Macbeth lamp A lamp used in testing colour vision. It contains a powerful tungsten filament bulb with a blue filter of specific absorption properties such that it produces a source of a colour temperature of about 6800 K, thus approximating the spectral characteristics of natural sunlight. The lamp is also fitted with a stand to hold the colour vision booklet (Fig. L2). Syn. Macbeth illuminant C. See CIE standard illuminants; pseudoisochromatic plates; Farnsworth test.tungsten-halogen l. See lamp, halogen. 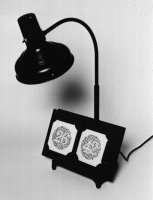 Feedback
Flashcards & Bookmarks ?
Please log in or register to use Flashcards and Bookmarks. You can also log in with
Flashcards ?
My bookmarks ?
+ Add current page to bookmarks
Mentioned in ?
References in classic literature ?
Now this was the magic lamp, which Aladdin had left there, as he could not take it out hunting with him.
She went and said to the magician: "Give me a new lamp for this."
Little he cared, but left off crying his lamps, and went out of the city gates to a lonely place, where he remained till nightfall, when he pulled out the lamp and rubbed it.
"That is not in my power," said the genie; "I am only the slave of the ring; you must ask the slave of the lamp."
He saw plainly that all his misfortunes were owing to the loss of the lamp, and vainly wondered who had robbed him of it.
After he had kissed her Aladdin said: "I beg of you, Princess, in God's name, before we speak of anything else, for your own sake and mine, tell me what has become of an old lamp I left on the cornice in the hall of four-and-twenty windows, when I went a-hunting."
"Alas!" she said "I am the innocent cause of our sorrows," and told him of the exchange of the lamp.
He then went to the dead magician, took the lamp out of his vest, and bade the genie carry the palace and all in it back to China.
He left her and rubbed the lamp, and when the genie appeared commanded him to bring a roc's egg.
He bought a dozen copper lamps, put them into a basket, and went to the palace, crying: "New lamps for old!" followed by a jeering crowd.
"Madam," replied the slave, "who can help laughing to see an old fool offering to exchange fine new lamps for old ones?"
View in context
Amoraq jumped from the bench where she sat, and began to sweep things into the girl's lap--stone lamps, iron skin-scrapers, tin kettles, deer- skins embroidered with musk-ox teeth, and real canvas-needles such as sailors use--the finest dowry that has ever been given on the far edge of the Arctic Circle, and the girl from the North bowed her head down to the very floor.
View in context