Lactation is the medical term for yielding of milk by the mammary glands which leads to breastfeeding. Human milk contains the ideal amount of nutrients for the infant, and provides important protection from diseases through the mother's natural defenses.

Early in a woman's pregnancy her milk-producing glands begin to prepare for her baby's arrival, and by the sixth month of pregnancy the breasts are ready to produce milk. Immediately after the baby is born, the placenta is delivered. This causes a hormone in the woman's body (prolactin) to activate the milk-producing glands. By the third to fifth day, the woman's breasts fill with milk.
Then, as the baby continues to suck each day, nursing triggers the continuing production of milk. The baby's sucking stimulates nerve endings in the nipple, which signal the mother's pituitary gland to release oxytocin, a hormone that causes the mammary glands to release milk to the nursing baby. This is called the "let-down reflex." While the baby's sucking is the primary stimulus for this reflex, a baby's cry, thoughts of the baby, or the sound of running water also may trigger the response. Frequent nursing will lead to increased milk production.
Breast milk cannot be duplicated by commercial baby food formulas, although both contain protein, fat, and carbohydrates. In particular, breast milk changes to meet the specific needs of a baby. The composition of breast milk changes as the baby grows to meet the baby's changing needs. Most important, breast milk contains substances called antibodies from the mother that can protect the child against illness and allergies. Antibodies are part of the body's natural defense system against infections and other agents that can cause disease. Breast milk also helps a baby's own immune system mature faster. As a result, breast-fed babies have less diarrhea and fewer ear infections, rashes, allergies, and other medical problems than bottle-fed babies.
There are many other benefits to breast milk. Because it is easily digested, babies do not get constipated. Breast-fed babies may have fewer speech impediments, and breastfeeding can improve cheekbone development and jaw alignment.
Breastfeeding is also good for the mother. The act of breastfeeding releases hormones that stimulate the uterus to contract, helping it to return to normal size after delivery and reducing the risk of bleeding. The act of producing milk is thought to burn more calories, helping the mother to lose excess weight gained during pregnancy. However, research in 2004 disputed this belief when body composition changes of lactation and non-lactating women were compared at intervals for six months postpartum. Breastfeeding may be related to a lower risk of breast cancer, ovarian cancer, or cervical cancer. This benefit is stronger the younger a woman is when she breastfeeds; women who breastfeed before age 20 and nurse for at least six months have a 50% drop in the risk for breast cancer.
In addition, breastfeeding does not involve any formulas, bottles and nipples, or sterilizing equipment. Breast milk is free, and saves money by eliminating the need to buy formula, bottles, and nipples. Because breast-fed babies are healthier, health care costs for breast-fed infants are lower.

Breastfeeding should begin as soon as possible after birth, and should continue every two to three hours. However, all babies are different; some need to nurse almost constantly at first, while others can go much longer between feedings. A baby should be fed at least 8-12 times in 24 hours. Because breast milk is easily digested, a baby may be hungry again as soon as one and one-half hours after the last meal.
Mothers should wear comfortable, loose, front-opening clothes and a good nursing bra. Mothers should find a comfortable chair with lots of pillows, supporting the arm and back. Feet should rest on a low footstool, with knees raised slightly. The baby should be level with the breast. The new mother may have to experiment with different ways of holding the baby before finding one that is comfortable for both the mother and baby.
Some babies have no trouble breastfeeding, while others may need some assistance. Once the baby begins to suck, the mother should make sure that the entire dark area around the nipple is in the baby's mouth. This will help stimulate milk flow, allowing the baby to get enough milk. It will also prevent nipple soreness.
Breastfeeding mothers will usually offer the baby both breasts at each feeding. Breastfeeding takes about 15-20 minutes on each side. After stopping the feeding on one side, the mother should burp the baby before beginning the feeding on the other breast. If the baby falls asleep at the breast, the next feeding should begin with the breast that was not nursed.
Mothers can tell if the baby is getting enough milk by checking diapers; a baby who is wetting between four to six disposable diapers (six to eight cloth) and who has three or four bowel movements in 24 hours is getting enough milk.

There are no rules about when to stop breastfeeding. A baby needs breast milk for at least the first year of life; as long as a baby eats age-appropriate solid food, the mother may nurse for several years.

Most common illnesses can not be transmitted via breast milk. However, some viruses, including HIV (the virus that causes AIDS) can be passed in breast milk; for this reason, women who are HIV-positive should not breastfeed.
Many medications have not been tested in nursing women, so it is not known if these drugs can affect a breast-fed child. A nursing woman should always check with her doctor before taking any medications, including over-the-counter drugs.
These drugs are not safe to take while nursing:

[lak-ta´shun]
1. the secretion of milk by the breasts; it is thought to be brought about by action of progesterone and estrogen and specific pituitary hormones, such as lactogenic hormone (prolactin). It does not begin until at least 3 days after the birth of the baby; before that, and immediately after birth, the breast secretes colostrum. 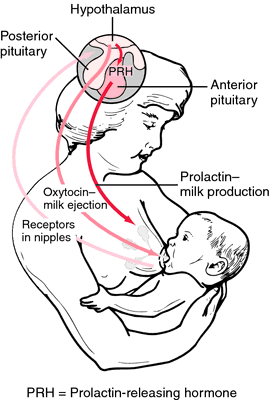 Stimuli for lactation. From Applegate, 2000.
2. the period of weeks or months during which a woman is lactating and a baby can be breast-fed; see breastfeeding.

(lak-tā'shŭn), Avoid the illegitimate variant lactancy.
1. Production of milk.
2. Period following birth during which milk is secreted in the breasts.
[L. lactatio, suckle]

1. Milk secretion–the production and secretion of milk by the mammary glands.
2. The time during which a ♀ provides breast milk to an infant. See Breast feeding, Weaning.

(lak-tā'shŭn)
1. Production of milk.
2. Period following birth during which milk is secreted in the breasts.
[L. lactatio, suckle]

The secretion and production of milk in the breasts (MAMMARY GLANDS) after childbirth.

the production of milk by the adult female mammal from the mammary gland, in order to suckle its young. Lactation is induced by LUTEOTROPIC HORMONES from the anterior PITUITARY GLAND. see COLOSTRUM.