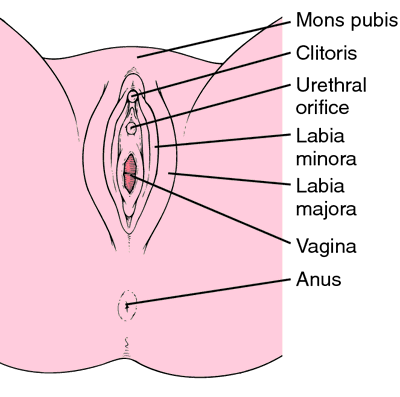 Female external genitalia. From Applegate, 2000.
labium ma´jus (pl. la´bia majo´ra), an elongated fold in the female, one on either side of the rima pudendi.
labium mi´nus (pl. la´bia mino´ra), the small fold of skin on either side, between the labia majora and the opening of the vagina.
la´bia o´ris the lips of the mouth.
Miller-Keane Encyclopedia and Dictionary of Medicine, Nursing, and Allied Health, Seventh Edition. © 2003 by Saunders, an imprint of Elsevier, Inc. All rights reserved.

(lā′bē-əm)
n. pl. la·bia (-bē-ə)
1. Anatomy Any of four folds of tissue of the female external genitals.
2. Zoology
a. A liplike structure, such as that forming the floor of the mouth of certain invertebrates, especially insects.
b. The inner margin of the opening of a gastropod shell.
The American Heritage® Medical Dictionary Copyright © 2007, 2004 by Houghton Mifflin Company. Published by Houghton Mifflin Company. All rights reserved.

Feedback
Flashcards & Bookmarks ?
Please log in or register to use Flashcards and Bookmarks. You can also log in with
Flashcards ?
My bookmarks ?
+ Add current page to bookmarks
Mentioned in ?
References in periodicals archive ?
citri nymph, showing the extended tip of the stylets (st) and the partially retracted/looped part of the stylets (rs): cg, clypeal groove, cl, clypeus; lb, labium; lbl & lb2, labial segments 1 & 2; rs, retracted/looped stylets ; so, stylet-holding organ.
Retracted stylets in nymphs of the Asian citrus psyllid are held externally against the clypeus by a special paired organ not found in the adults
This sensillum is short and protrudes slightly above the surface of the labium. This type has been identified in the Belostomatidae (Belostoma flumineum, Figures 11(b) and 11(c); Hydrocyrius colombiae Figures 12(a) and 12(b); Lethocerus deyrollei, Figures 14(b) and 14(c)) and Appasus major (Table 2).
They are distributed on the surfaces of the first, second, and third segment, but not on the fourth segment of the labium.
Large (50-100 [micro]m) (TRS1) and short (1.0-49 [micro]m) (TRS2) trichoid sensilla are placed on the dorsal side on the fourth segment of the labium (Figures 4(a) and 4(b)).
Comparative analysis and systematic mapping of the labial sensilla in the nepomorpha (Heteroptera: Insecta)
punjabensis was more closely related to Riazocoris (with both the above species) because it shared with both taxa the synapomorphic characters of long labium which atleast reaches to metacoxae, scutellum not regularly gradually tapering apically but with a well marked apical lobe separated by a visible constriction and ninth paratergites much longer in the female ovipositor, distinctly passing beyond the medially fused posterior margin of eighth paratergites.
The unique presently described new generic taxon is however quite different from both the above specific taxa of Riazocoris in having the autapomorphics of remarkably longer labium which reaches the third abdomoinal sternum, metathracic scent auricle much shorter, reduced with markedly subacute apex, connexiva more or less entirely concealed (apparently without shining black patches), without short colourless corial patch on either side and general body coloration drab, dark brown, not with a metallic sheen.
A New Caystrine Stink Bug Genus Neoriazocoris to Accommodate Caystrus punjabensis Ahmad and Kamaluddin (Hemiptera: Pentatomidae) and its Phylogenetic Relationship
The morphological and anatomical structures of the labium in the individual representatives of the Nepomorpha have been subject of observation and interpretation for a number of years [9, 21, 26-29].
These changes have been preserved as various modifications and forms of particular structures of the labium and would provide an interesting source for comprehensive studies.
Deliberations on the external morphology and modification of the labial segments in the Nepomorpha (Heteroptera: Insecta) with notes on the phylogenetic characteristics
Labium brown, lighter on anterior margin, darker laterally; 0.70 long, 0.64 wide.
Labium light brown, yellowish at anterior margin; 0.60 long, 0.52 wide.
Revision of the Neotropical spider genus Enna (Araneae, Lycosoidea, Trechaleidae)