[ne]
the area around the knee joint, a hinge joint that is one of the largest joints of the body, sustaining great pressure. The knee is formed by the proximal portion of the tibia, the distal end of the femur, and the patella, or kneecap. The bones are joined by ligaments, and the patella is secured to the adjacent bones by powerful tendons. The fibula is attached at the side of the knee to the tibia. Two crescent-shaped pads of cartilage, one medial and one lateral, called menisci, lying on top of the tibia cushion it from the femur and form the gliding surfaces of the joint in motion. Further cushioning is supplied by bursae, which are located around the main joint, between it and the patella and on the outside of the patella. A capsule of ligaments binds the whole assembly together. The capsule is lined with synovial membrane, which secretes a lubricating synovial fluid that makes possible a smooth, gliding motion. Traumatic disorders of the knee are common and include dislocation, sprain, and fracture. 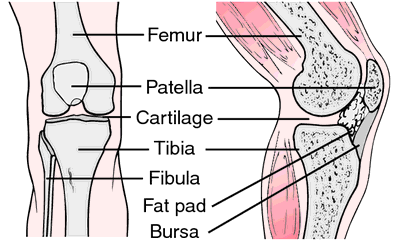 Left: Knee joint, front view. Right: Knee joint, flexed in profile.
knee jerk (knee reflex) a kick reflex produced by sharply tapping the patellar ligament. To test this reflex, the lower part of the leg is allowed to hang relaxed (such as by crossing the legs at the knees) and the examiner taps the ligament below the patella with a small rubber hammer. The normal reaction is contraction of the quadriceps muscle, causing involuntary extension of the lower leg. This is a stretch reflex; striking the patellar ligament stretches the quadriceps muscle at the front of the thigh and causes it to contract. Two nerves are involved; one receives the stimulus and transmits the impulse to the spinal cord, and the other, a motor nerve, receives the impulse and relays it to the quadriceps muscle. Inadequate response to the knee jerk test may mean that the reflex mechanism involved is in some way impaired. In some people with normal reflexes the jerk of the knee is so light as to be nearly imperceptible, and the examiner must make other tests to check the reflex mechanism. Called also patellar or quadriceps reflex.
Miller-Keane Encyclopedia and Dictionary of Medicine, Nursing, and Allied Health, Seventh Edition. © 2003 by Saunders, an imprint of Elsevier, Inc. All rights reserved.

a sudden contraction of the anterior muscles of the thigh, caused by a smart tap on the patellar tendon while the leg hangs loosely at a right angle with the thigh.
Synonym(s): knee jerk, knee reflex, knee-jerk reflex, patellar tendon reflex, quadriceps reflex
Farlex Partner Medical Dictionary © Farlex 2012

Feedback
Flashcards & Bookmarks ?
Please log in or register to use Flashcards and Bookmarks. You can also log in with
Flashcards ?
My bookmarks ?
+ Add current page to bookmarks
Mentioned in ?
References in periodicals archive ?
Escaping from the Knee Jerk, you spy a door with a flashing neon sign proclaiming "Creativity `R' Us." Beyond the open door is a gaily painted roller coaster with another sign saying, "Climb Aboard for Creative Punch." You clamber aboard and the joy ride begins.
Dealing with muddle-headed Mutant Ninja communicators
He is skilful, a crowd pleaser and I'm sure the knee jerk reaction of Spurs fans would be to want him to stay.
Stan THE MAN: Dimitar Berbatov
Corfe's decision seemed to be a knee jerk response to the boos he received from fans when making a half-time presentation.
Football: Aldo's in the dark