A rare autosomal dominant disorder of keratinisation characterised by multiple focal keratotic papules with acantholytic dyskeratosis. It first appears in childhood or adolescence with the formation of numerous flesh-colored papules in sebaceous areas of the skin glands—chest, scalp, forehead, back, ears, groin, nasolabial folds—which, with time, become encrusted. The nails are dystrophic, palms possibly pitted; variable retinitis pigmentosa and cataracts.

(ker'ă-tō'sis fŏ-lik'yū-lā'ris)
A familial eruption, beginning usually in childhood, in which keratotic papules originating from both follicles and interfollicular epidermis of the trunk, face, scalp, and axillae become crusted and verrucous; often intensely pruritic.
Synonym(s): Darier disease, Hailey and Hailey disease.
Medical Dictionary for the Health Professions and Nursing © Farlex 2012 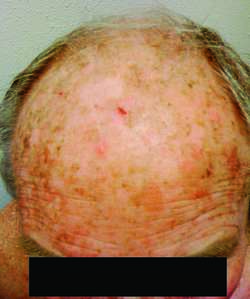 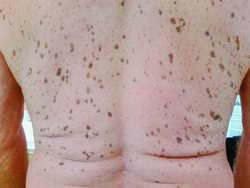 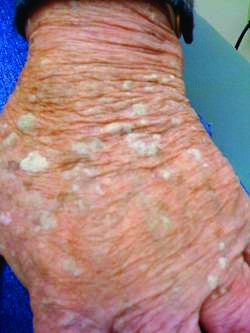