[ke´loid]
a sharply elevated, irregularly shaped, progressively enlarging scar, due to excessive collagen formation in the corium during connective tissue repair. It is a benign tumor that usually has its origin in a scar from surgery or a burn or other injury; keloids are generally considered harmless and noncancerous, although they may produce contractures or cosmetic alterations that affect body image. Ordinarily they cause no trouble beyond an occasional itching sensation. Surgical removal is not usually effective because it results in a high rate of recurrence. However, intralesional injection of steroids, cryotherapy, and x-ray therapy often are of substantial help. When x-ray therapy is employed, care must be taken not to destroy the surrounding healthy tissue. adj., adj keloid´al. 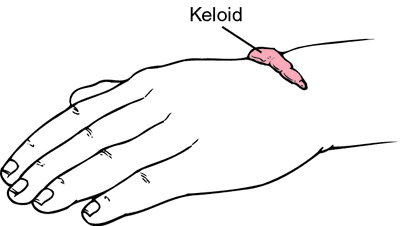 Keloid. From Dorland's, 2000.
Miller-Keane Encyclopedia and Dictionary of Medicine, Nursing, and Allied Health, Seventh Edition. © 2003 by Saunders, an imprint of Elsevier, Inc. All rights reserved. KELOID
An exuberant scar that forms at the site of an injury (or an incision) and spreads beyond the borders of the original lesion. The scar is made up of a swirling mass of collagen fibers and fibroblasts. Grossly it appears to have a shiny surface and a rubbery consistency. The most common locations for keloid formation are on the shoulders, chest, and back. See: illustration

The injection of a corticosteroid sometimes helps the lesion regress. Freezing the tissue with liquid nitrogen, applying pressure dressings, treating it with lasers, excising it surgically, or a combination of these treatments may be used, but recurrences are frequent.

A keloid that develops at the site of an acne pustule.
illustration
Medical Dictionary, © 2009 Farlex and Partners

An abnormal healing response causing scars that are markedly overgrown, thickened and disfiguring. Keloids are commoner in black people than in white and may follow any injury or surgical incision. Surgical removal of keloids is followed by even more extensive keloid formation but they can be helped by injection of corticosteroid drugs. Untreated keloids eventually flatten.
Collins Dictionary of Medicine © Robert M. Youngson 2004, 2005

An unusual or abnormal growth of scar tissue, as in the third stage of granuloma inguinale.
Mentioned in: Granuloma Inguinale
Gale Encyclopedia of Medicine. Copyright 2008 The Gale Group, Inc. All rights reserved.

Feedback
Flashcards & Bookmarks ?
Please log in or register to use Flashcards and Bookmarks. You can also log in with
Flashcards ?
My bookmarks ?
+ Add current page to bookmarks
Mentioned in ?
References in periodicals archive ?
(1,3) Intralesional steroid injections (triamcinolone acetonide 2.5-5 mg/cc) with 0.1 cc injected into each lesion every 2 to 3 weeks for 3 to 6 injections can reduce inflammation and pruritus and reduce the thickness of keloidal scars.
Occipital scalp papules in a teenage boy
However, MIKAELIAN & GROSS (2002) use the term fibroma or keloidal fibrossarcoma for cutaneous nodules or plaques in dogs, which, histologically, are focal dermal and/or subcutaneous depositions of thickened and hyalinized collagen fibers mixing with fibroblasts.
Aggressive keloid-mimicking tumor in Melanosuchus niger in captivity/Queloide agressivo imitando tumor em Melanosuchus niger em cativeiro
Topics ranged from findings on how African hairstyling habits affect the hair to progress in treating keloidal acne (acne associated with subcutaneous hair growth).
What makes ethnic beauty so complex?
She reviewed some of the recent papers about ethnic differences in skin physiology, diseases and treatment as well as conditions such as contact dermatitis, pigment disorders, pseudofolliculitis barbae, keloidal scarring and melanoma.
A detailed look at ethnic hair & skin: three-day symposium sponsored by L'Oreal delves into the complex issues surrounding ethnic skin and hair care
These may include ice-pick type scars, hypertrophic scars, atrophic macules, or keloidal scars.
Overview of the evaluation and management of acne vulgaris
In preclinical studies, Immusol has shown that VIT100 inhibits the growth of cells taken from multiple keloid biopsies as compared to the same keloidal cells treated with a control.
IMMUSOL'S VIT100 ENTERS PHASE I FOR KELOIDS/HYPERTROPHIC SCARS
The erstwhile slave Sethe, wounded emotionally and physically while she was a slave, has keloidal marks on her back to arrest the reader.
An abiku-ogbanje Atlas: a pre-text for rereading Soyinka's Ake and Morrison's Beloved
Patients with mild (less than 26) atrophic icepick acne scars and those with keloidal tendency were not included.
Outcome of CROSS technique with 100% trichloroacetic acid in the management of atrophic icepick acne scars
Pedunculated lesions are quite amenable to surgery They are often mushroom shaped, with a narrow base that doesn't contain keloidal tissue.
Cutting is never enough, adjunctive treatment essential
Initial injection of TA to the keloidal tissue is very laborious due to its firm consistency.
Effect of intralesional injection of triamcinolone acetonide on keloid --a prospective observational study
Pregnant females and one-year postdelivery or lactating females and females on oral contraceptive pills or patients with preexisting inflammatory dermatoses such as psoriasis and atopic dermatitis, or with history infection or with keloidal tendency were excluded from the study.
Effect of Trichloroacetic acid and glycolic acid peel on melasma via split-face technique
The mesenchymal nature of this tumor provides the groundwork for different histologic variants (clear cell, spindle cell, granular cell, pigmented, keloidal, sclerosing, myxoid, pseudoangiomatous, and variants with osteoclast-giant cell, osteoid, or chondroid formation), making it harder for the pathologist to reach a diagnosis based on histology.
Atypical Fibroxanthoma