[in-jek´shun]
1. congestion.
2. the forcing of a liquid into a part, as into the subcutaneous tissues, the vascular tree, or an organ.
3. a substance so forced or administered; in pharmacy, a solution of a medicament suitable for injection.

Immunizing substances, or inoculations, are generally given by injection. Some medicines cannot be given by mouth because chemical action of the enzymes and digestive fluids would change or reduce their effectiveness, or because they would be removed from the body too quickly to have any effect. Occasionally a medication is injected so that it will act more quickly. In addition to the most common types of injections described below, injections are sometimes made into arteries, bone marrow, the spine, the sternum, the pleural space of the chest region, the peritoneal cavity, and joint spaces. In sudden heart failure, heart-stimulating drugs may be injected directly into the heart (intracardiac injection). 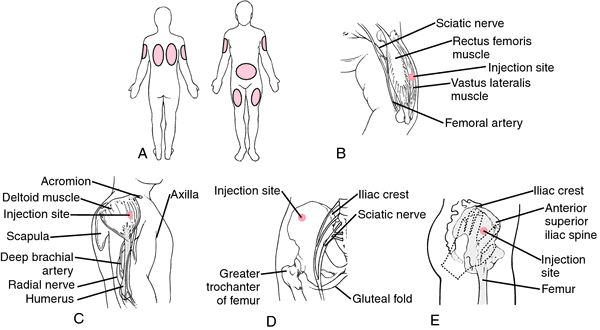 Injections into the anterolateral aspect of the thigh are considered the safest because there is less danger of damage to a major blood vessel or nerve. The area permits multiple injections, is more accessible, and is easier to stabilize, particularly in pediatric patients or others who are restless and uncooperative. The vastus lateralis muscle is located by identifying the trochanter and the side of the knee cap and then drawing a visual line between the two. The distance is then divided into thirds and the needle inserted into the area identified as the middle third.

The needle should be long enough to insure that the medication is injected deep into the muscle tissue. The gauge of the needle depends on the viscosity of the fluid being injected. As a general rule, not more than 5 ml is given in an intramuscular injection for an adult. The maximum for an infant is 0.5 ml, and the injection is made into the vastus lateralis muscle. The needle is inserted at a 90-degree angle to the skin. When the gluteus maximus muscle is the site chosen for the injection, the patient should be in a prone position with the toes turned in if possible. This position relaxes the muscle and makes the injection less painful.
intrathecal injection injection of a substance through the theca of the spinal cord into the subarachnoid space. Patients receiving intrathecal chemotherapy for metastatic malignancy of the central nervous system should maintain a flat or Trendelenburg position for one hour after treatment to achieve optimum distribution of the drug.
intravenous injection an injection made into a vein. Intravenous injections are used when rapid absorption is called for, when fluid cannot be taken by mouth, or when the substance to be administered is too irritating to be injected into the skin or muscles. In certain diagnostic tests and x-ray examinations a drug or dye may be administered intravenously. (See also intravenous infusion.)
jet injection injection of a drug in solution through the intact skin by an extremely fine jet of the solution under high pressure.
subcutaneous injection injection made into the subcutaneous tissues. Although usually fluid medications are injected, occasionally solid materials such as steroid hormones may be injected in small, slowly absorbed pellets to prolong their effect. Subcutaneous injections may be given wherever there is subcutaneous tissue, usually in the upper outer arm or thigh. A 25-gauge needle about 2 cm long is usually used, held at a 45-degree angle to the skin, and the amount injected should not exceed 2 ml in an adult. Subcutaneous insulin injections may be given at a 90-degree angle with an insulin syringe. Called also hypodermic injection. 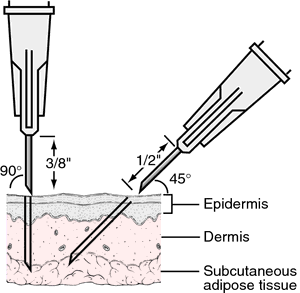 hypodermic injection of drugs by a jet injection device.

The injection of medicines and vaccines through the skin or intramuscularly without a needle. A nozzle ejects a fine spray of liquid at such speed as to penetrate but not harm the skin. The procedure is harmless and is esp. useful in immunizing a great number of persons quickly and economically.
See also: injection