[ek´ser-sīz]
performance of physical exertion for improvement of health or correction of physical deformity.
active exercise motion imparted to a part by voluntary contraction and relaxation of its controlling muscles.
active assistive exercise voluntary contraction of muscles controlling a part, assisted by a therapist or by some other means.
aerobic exercise a type of physical activity that increases the heart rate and promotes increased use of oxygen in order to improve the overall body condition.
ballistic stretching e's rapid, jerky movements employed in exercises to stretch muscles and connective tissue.
Buerger-Allen e's see buerger-allen exercises.
cardiovascular exercise exercises to promote improved capacity of the cardiovascular system. They must be administered at least twice weekly, with most programs conducted three to five or more times weekly. The contraction of major muscle groups must be repeated often enough to elevate the heart rate to a target level determined during testing. Used in the treatment of compromised cardiovascular systems, as in cardiac rehabilitation, or as a preventive measure.
corrective exercise therapeutic exercise.
endurance exercise any exercise that involves the use of several large groups of muscles and is thus dependent on the delivery of oxygen to the muscles by the cardiovascular system; used in both physical fitness programs and testing of cardiovascular and pulmonary function.
isokinetic exercise dynamic muscle activity performed at a constant angular velocity.
isometric exercise active exercise performed against stable resistance, without change in the length of the muscle.
isotonic exercise active exercise without appreciable change in the force of muscular contraction, with shortening of the muscle.
Kegel e's see kegel exercises.
McKenzie exercise an exercise regimen used in the treatment of low back pain and sciatica, prescribed according to findings during mechanical examination of the lumbar spine and using a combination of lumbar motions, including flexion, rotation, side gliding, and extension. It is sometimes referred to as McKenzie extension exercises, but this is a misnomer because the regimen involves movements other than extension.
muscle-setting exercise voluntary contraction and relaxation of skeletal muscles without changing the muscle length or moving the associated part of the body. Called also static exercise.
passive exercise motion imparted to a segment of the body by another individual, machine, or other outside force, or produced by voluntary effort of another segment of the patient's own body.
pelvic floor e's
1. a combination of endurance and strength exercises of the pelvic floor (circumvaginal or perianal) muscles, used in the management of stress urinary incontinence; the patient is taught to isolate and contract muscles once or twice a day.
2. in the nursing interventions classification, a nursing intervention defined as pelvic muscle exercise strengthening and training of the levator ani and urogenital muscles through voluntary, repetitive contraction to decrease stress, urge, or mixed types of urinary incontinence.
quadriceps setting exercise an isometric exercise to strengthen muscles needed for ambulation. The patient is instructed to contract the quadriceps muscle while at the same time elevating the heel and pushing the knee toward the mat.
range of motion (ROM) e's exercises that move each joint through its full range of motion, that is, to the highest degree of motion of which each joint normally is capable; they may be either active or passive. 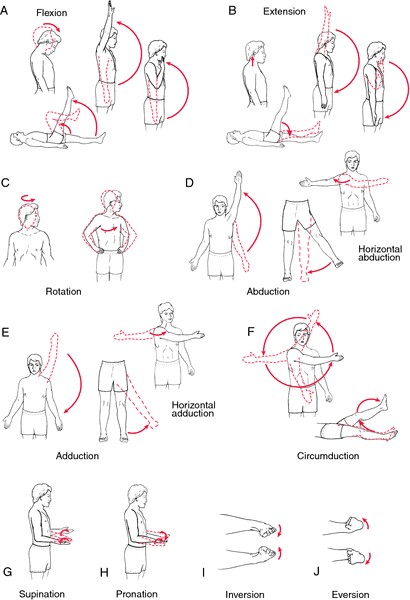 Examples of range of motion exercises. A, Flexion: The bending of a joint. B, Extension: A movement opposite to flexion in which a joint is in a straight position. C, Rotation: Pivoting a body part around its axis, as in shaking the head. D, Abduction: A movement of a limb away from the median plane of the body; the fingers are abducted by spreading them apart. E, Adduction: Moving toward the midline of the body or to the central axis of a limb. F, Circumduction: A combination of movements that cause a body part to move in a circular fashion. G, Supination: Extension of the forearm to bring the palm of the hand upward. H, Pronation: Movement of the forearm in the extended position that brings the palm of the hand to a downward position. I, Inversion: Movement of the ankle to turn the sole of the foot medially. J, Eversion: Movement of the sole of the foot laterally. From Lammon et al., 1995.
See accompanying figure.
resistance e's (resistive e's) activities designed to increase muscle strength, performed against an opposing force; the resistance may be either isometric, isotonic, or isokinetic.
static exercise muscle-setting exercise.
static stretching e's the placement of muscles and connective tissues at their greatest length by steady force in the direction of lengthening. Short duration forces can be obtained manually, but special traction devices, splints, and casts are generally used to apply low-intensity forces for prolonged periods (30 minutes or longer). Warming the soft tissue before or during stretching will generally facilitate lengthening.
exercise stress tests tests used in exercise testing.
exercise testing a technique for evaluating circulatory response to physical stress; it involves continuous electrocardiographic monitoring during physical exercise, the objective being to increase the intensity of physical exertion until a target heart rate is reached or signs and symptoms of cardiac ischemia appear. Called also stress testing.ƒ

Clinical exercise testing has become an important tool in screening for and diagnosing early ischemic heart disease that cannot be detected by a standard resting EKG, and in predicting the probability of the development of the condition in later years. The technique cannot determine the location of the lesion causing cardiac ischemia and therefore must be supplemented with angiocardiography when coronary occlusion is detected.

Common forms of exercise used include the treadmill and the bicycle ergometer. These procedures must be performed in a clinical setting where health care personnel are available in the event symptoms develop during exercise, such as dyspnea, vertigo, extreme fatigue, severe arrhythmias, or other abnormal EKG readings.

Exercise testing also may be used to assess the pulmonary status of a patient with a respiratory disease. As the patient performs specific exercises, blood samples are drawn for blood gas analysis, and ventilatory function tests such as tidal volume, total lung capacity, and vital capacity are conducted.
therapeutic exercise the scientific use of bodily movement to restore normal function in diseased or injured tissues or to maintain a state of well-being; called also corrective exercise. As with any type of therapy, a therapeutic exercise program is designed to correct specific disabilities of the individual patient. The program is evaluated periodically and modified as indicated by the patient's progress and response to the prescribed regimen. Exercises affect the body locally and systemically and bring about changes in the nervous, circulatory, and endocrine systems as well as the musculoskeletal system.ƒ

Among the types of therapeutic exercise are those that (1) increase or maintain mobility of the joints and surrounding soft tissues, (2) develop coordination through control of individual muscles, (3) increase muscular strength and endurance, and (4) promote relaxation and relief of tension.
Joint Mobility. In the absence of a disability that prohibits mobility, the regular day-to-day activities of living maintain the normal movements of the joints. If, however, motion is restricted for any reason, the soft tissues become dense and hard and adaptive shortening of the connective tissues takes place. These changes begin to develop within four days after a joint has been immobilized and are evident even in a normal joint that has been rendered immobile. It is for this reason that therapeutic exercises to prevent loss of joint motion are so important and should be begun as soon as possible after an injury has occurred or a disease process has begun.ƒ

Prevention of the loss of joint motion is much less costly and time-consuming than correction of tissue changes that seriously impair joint mobility. It is recommended that each joint should be put through its full range of motion three times at least twice daily. If the patient is not able to carry out these exercises, he is assisted by a therapist or member of the family who has been instructed in the exercises. Inflammation of the joint, as in arthritis, may cause some pain on motion, and so passive exercises are done slowly and gently with the joint as relaxed as possible. Procedures that stretch tight muscles to increase joint motion should be done only by a skilled therapist who understands the hazards of fracture and bleeding within the joint, which can occur if the exercises are done improperly or too strenuously.
Muscle Training. Exercises of this type are taught to the patient who has lost some control over a major skeletal muscle. By learning precise and conscious control over a specific muscle, the patient is able to strengthen and coordinate its movement with normal motor patterns and thus enhance mobility. Muscle training or neuromuscular re-education demands full cooperation of the patient, who must be capable of understanding the purpose of the exercises, following directions, and giving full attention to the muscle isolated for retraining. The sessions are held in a quiet, comfortable atmosphere to facilitate concentration by the patient.ƒ

The development of conscious control over individual muscles is useful in the rehabilitation of patients with a variety of disorders, including physical trauma, diseases such as poliomyelitis that affect the motor neurons, and congenital disorders such as cerebral palsy. It involves a systematic program of sequential activities under the direction of a therapist knowledgeable in the technique. Although it requires much effort on the part of the patient and the therapist, the attainment of muscle control and coordination is a satisfying reward.
Muscle Strength and Endurance. Improvement of muscle strength and endurance is particularly important in the rehabilitation of patients whose goal is to return to an active and productive life after a debilitating illness or disabling injury. The exercises are prescribed according to the individual needs of the patient and usually involve more than one group of muscles.ƒ

Strengthening (force increasing) exercises are prescribed after an examination has shown weakness in individual muscles or muscle groups. These exercises are usually administered with relatively high resistance and few (3 to 10) repetitions. A group of exercises, called a set, is followed by a few minutes of rest. Three to 5 sets for a muscle or group constitute one bout of exercises. Strengthening exercises are often performed daily in early stages of rehabilitation, but less often later in treatment.

Endurance exercises stimulate changes in the involved muscle or muscles, resulting in improved capacity for repeated contraction (e.g., increased ability to use metabolites). When conducted over a sufficient length of time and with several muscle groups, they may also produce central effects of the cardiovascular system (see cardiovascular exercise). Endurance exercises employ relatively low resistance and numerous (15 or more) repetitions. Endurance exercises are generally administered daily.
Relief of Tension. Exercises that promote relaxation of the muscles and provide relief from the effects of tension are useful in a wide variety of disorders ranging from mild tension headache to insomnia. Patients who are especially tense may require several sessions of instruction in relaxation before they can learn the technique.
Williams' e's (Williams' flexion e's) a therapeutic exercise regimen used in the treatment of low back pain; it seeks to reduce lumbar lordosis through flexion of the lumbar spine and strengthening of the abdominal musculature.
Miller-Keane Encyclopedia and Dictionary of Medicine, Nursing, and Allied Health, Seventh Edition. © 2003 by Saunders, an imprint of Elsevier, Inc. All rights reserved.

(ī′sō-kə-nĕt′ĭk, -kī-)
n.
Exercise performed with a specialized apparatus that provides variable resistance to a movement, so that no matter how much effort is exerted, the movement takes place at a constant speed. Such exercise is used to test and improve muscular strength and endurance, especially after injury.
The American Heritage® Medical Dictionary Copyright © 2007, 2004 by Houghton Mifflin Company. Published by Houghton Mifflin Company. All rights reserved.

(ī'sō-ki-net'ik eks'ĕr-sīz)
Exercises in which the muscle contracts at a consistent speed and tension throughout the entire range of movement.
Medical Dictionary for the Health Professions and Nursing © Farlex 2012