Intussusception is the enfolding of one segment of the intestine within another. It is characterized and initially presents with recurring attacks of cramping abdominal pain that gradually become more painful.

Intussusception occurs when part of the bowel or intestine is wrapped around itself producing a masslike object on the right side of the abdomen during palpation (a procedure used during a physical examination, when the examiner touches the abdomen with his/her hand, usually feeling for mass, pain, or discomfort). The number of new cases of intussuscetion is approximately 1.5 to four cases per 1,000 live births. The onset of abdominal pain is usually abrupt and severe. Just as fast as the onset of pain appears, it disappears and the child resumes activity normally. This process of sudden severe abdominal pain appearing out of the blue then disappearing is repeated with duration of painful attacks. The pain usually increases after approximately five hours of recurrent cycles of severe abdominal pain followed by relaxation. Vomiting and diarrhea occur in about 90% of cases with six to 12 hours after initial onset of symptoms.
Physical examination and palpation usually reveal a sausage shaped mass of enfolded bowel in the right upper mid portion of the abdomen. Within a few hours approximately 50% of cases have bloody, mucus filled bowel movements. At about this time the child is visibly very ill with fever, tenderness, and distended abdomen. Intussusception is the most frequent cause of intestinal obstruction during the first two years of life and commonly affects children between three to 12 months of age. The disease is three times more common in males than in females. In about 85% of cases the cause is idiopathic (meaning unknown). The remaining 15% of cases can be caused by a variety of other diseases such as tumors of the lymph nodes (lymphoma), fat tumors (lipomas), foreign bodies/objects, or from infections that mobilize immune cells to the area causing and an inflammatory reaction and intestinal blockage. Most cases of intussusception do not strangulate the affected bowel within the first 24 hours. If the disease is not treated after this time, the possibility of intestinal gangrene, shock, and death increases.

The major symptom of intussusception is when a healthy child suddenly and without warning experiences severe abdominal pain that subsides and usually results in continuation of normal activities such as playing. The duration of the painful attacks increases as the hours go by. Usually, the child develops nausea, vomiting, and diarrhea soon afterwards in about 90% of all cases. The child becomes weak, exhausted, and develops a fever. The affected child may also expel bloody, mucus-like bowel movements. These blood filled bowel movements are usually due to impaired blood flow to the obstructed area. During palpation there may be a sausage-shaped mass located on the upper right mid portion of the abdomen. If the disease progresses and is undetected, the child may develop necrosis death of cells within the affected area. Additionally, there may be perforation or hole in the intussusception bowel that can cause a life threatening infection in the peritoneum (a layer of tissue that protects the organs and intestines within the abdominal cavity). This infection of the peritoneum is called peritonitis. Some patients may exhibit altered states of consciousness or seizures.

A presumed diagnosis can be made by history alone. If the clinician suspect's intussusception x-ray films should be performed, which may reveal a mass in the right upper mid abdominal region. Two classical clinical signs are mucus-blood filled stools and a "coiled string" appearance in the affected bowel as visualized during an x ray with a barium enema. Blood chemistry analysis is not specific for intussusception. Depending on vomiting and blood loss through the stools, blood chemistry may reflect signs of dehydration and anemia.

Barium — A chemical used in certain radiological studies to enhance visualization of anatomical structures.
Obstruction — A blockage that prevents movement.

Treating intussusception by reduction (alleviating the source of blockage) is an emergency procedure. The barium examination is not only the diagnostic tool of choice, but also frequently curative. Infusion by gravity from a catheter placed in the rectum will tend to relieve pressure buildup. If this does not relieve the area, then air can be pumped into the colon to clear blockage. If these procedures are unsuccessful then surgery is required. Approximately 25% of affected children require surgical intervention. Surgery in the affected bowel is advantageous since the actual cause can be removed, and the procedure decreases the possibility of recurrences. In general without surgical correction of the affected bowel, there is a 5-10% chance of recurrence. Recurrence usually appears within the first 24 to 48 hours after barium procedure.

The outcome of intussusception depends on the duration of symptoms before treatment initiation. Most infants will recover if treatment is initiated within the first 24 hours. Untreated intussusception is almost always fatal. Overall even with treatment, approximately 1-2% of affected children will die.

Prevention of death can be accomplished with immediate medical care, within the first 24 hours. Once intussusception is suspected, emergency measures should be initiated. Untreated intussusception is almost always fatal. There is an increased chance for death if the disorder is not treated within 48 hours. 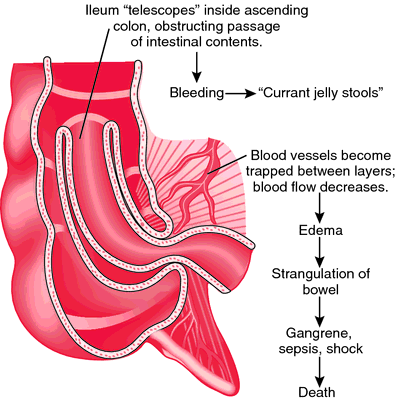 (in'tŭs-sŭs-sep'shŭn), [MIM*147710] Avoid the misspellings intususception, intussuseption, intersusception, and other variants.
1. The taking up or receiving of one part within another, especially the enfolding of one segment of the intestine within another.
See also: introversion, invagination.
2. Often, specifically, the process of incorporation of new material in the growth of the cell wall.
Synonym(s): introsusception
[L. intus, within, + sus-cipio, to take up, fr. sub + capio, to take]
Farlex Partner Medical Dictionary © Farlex 2012

Pediatric surgery The telescoping of one segment of the intestine into another, which compromises the involved segment, causing intestinal obstruction and strangulation, especially of the distal segment, inflammation, swelling, ↓ blood flow and, if prolonged, necrosis accompanied by bleeding, perforation, infection, dehydration, shock Clinical ♂:♀ ratio, 3:1; common from 5 months and 1 yr of age; onset is often abrupt with intense colicky intermittent abdominal pain that ↑ in intensity and duration, accompanied by vomiting and fever, weakness and eventually, shock; half of infants pass bloody mucus popularly termed “currant jelly” stool; early diagnosis is critical to salvage the bowel and the baby Management Surgery. Cf Volvulus.
McGraw-Hill Concise Dictionary of Modern Medicine. © 2002 by The McGraw-Hill Companies, Inc.

(in'tŭ-sŭ-sep'shŭn)
1. The taking up or receiving of one part within another, especially the enfolding of one segment of the intestine within another.
See also: introversion, invagination
2. The incorporation of new material in the growth of the cell wall.
Synonym(s): introsusception.
[L. intus, within, + sus-cipio, to take up, fr. sub + capio, to take]
Medical Dictionary for the Health Professions and Nursing © Farlex 2012

The movement of a length of bowel into an adjacent segment in the manner of a telescope. Invagination of a bowel segment. The condition is commonest in children. Once started, intussusception rapidly progresses until the supplying blood vessels are also drawn in and become obstructed. GANGRENE may result. Urgent surgical correction is required.
Collins Dictionary of Medicine © Robert M. Youngson 2004, 2005

the growth in the surface area of a cell wall by the inclusion of additional particles in the wall.
Collins Dictionary of Biology, 3rd ed. © W. G. Hale, V. A. Saunders, J. P. Margham 2005