The biconvex lens of the eye. From Frazier et al., 1996.
achromatic lens one corrected for chromatic (color) aberration.
apochromatic lens one corrected for chromatic (color) and spheric aberration.
biconcave lens one concave on both faces.
biconvex lens one convex on both faces.
bifocal lens one having two segments with different refracting power, the upper for far vision and the lower for near vision. See also bifocal glasses.
concave lens one curved like a section of the interior of a hollow sphere; it disperses light rays. Called also diverging lens.
contact l's corrective lenses that fit directly over the cornea of the eye; see also contact lenses.
converging lens (convex lens) one curved like the exterior of a hollow sphere; it brings light to a focus.
convexoconcave lens one that has one convex and one concave face.
crystalline lens lens (def. 2).
cylindrical lens one with at least one nonspherical surface, used to correct astigmatism.
diverging lens concave lens.
honeybee lens a magnifying eyeglass lens designed to resemble the multifaceted eye of the honeybee. It consists of three or six small telescopes mounted in the upper portion, directed toward the center and right and left visual fields. Prisms are included to provide a continuous, unbroken magnified field of view.
omnifocal lens one whose power increases continuously and regularly in a downward direction, avoiding the discontinuity in field and power inherent in bifocal and trifocal lenses.
orthoscopic lens one that gives a flat and undistorted field of vision, especially at the periphery.
planoconcave lens a lens with one plane and one concave side.
planoconvex lens a lens with one plane and one convex side.
Stokes's l's an apparatus used in the diagnosis of astigmatism.
trial l's ones used in testing the vision.
trifocal lens one having three segments of different refracting powers, the upper for distant, the middle for intermediate, and the lower for near vision.
Miller-Keane Encyclopedia and Dictionary of Medicine, Nursing, and Allied Health, Seventh Edition. © 2003 by Saunders, an imprint of Elsevier, Inc. All rights reserved.

(lenz), [TA] Avoid the misspelling lense.
1. A transparent material with one or both surfaces having a concave or convex curve; acts on electromagnetic energy to cause convergence or divergence of light rays.
2. The transparent biconvex cellular refractive structure lying between the iris and the vitreous humor, consisting of a soft outer part (cortex) with a denser part (nucleus), and surrounded by a basement membrane (capsule); the anterior surface has a cuboidal epithelium, and at the equator the cells elongate to become lens fibers. Synonym(s): crystalline lens
[L. a lentil]
Farlex Partner Medical Dictionary © Farlex 2012

(lĕnz)
n. pl. lenses
1. A ground or molded piece of glass, plastic, or other transparent material with opposite surfaces either or both of which are curved, by means of which light rays are refracted so that they converge or diverge to form an image.
2. A combination of two or more such pieces, sometimes with other optical devices such as prisms, used to form an image for viewing or photographing. Also called compound lens.
3. A thin piece of glass or plastic, as on a pair of sunglasses, that transmits light without refraction.
4.
a. A transparent, biconvex structure in the eye of a vertebrate or cephalopod that is located between the iris and the vitreous humor and focuses light rays entering through the pupil to form an image on the retina.
b. A similar structure in many invertebrates.
lensed adj.
The American Heritage® Medical Dictionary Copyright © 2007, 2004 by Houghton Mifflin Company. Published by Houghton Mifflin Company. All rights reserved.

(lenz)
1. A transparent material with one or both surfaces having a concave or convex curve; acts on electromagnetic energy to cause convergence or divergence of light rays.
2. [TA] The transparent biconvex cellular refractive structure lying between the iris and the vitreous humor, consisting of a soft outer part (cortex) with a denser part (nucleus), and surrounded by a basement membrane (capsule); the anterior surface has a cuboidal epithelium, and at the equator the cells elongate to become lens fibers.
[L. a lentil]
Medical Dictionary for the Health Professions and Nursing © Farlex 2012

A regular transparent solid having convex or concave surfaces such that incident beams of light are bent so as to converge (convex lenses) or diverge (concave lenses). The CORNEA is the main light-bending lens of the eye. The internal CRYSTALLINE LENS effects fine adjustments to the focus by an alteration of curvature. Fixed lenses are used in spectacles or in contact with the corneas to correct inherent errors of eye focusing.
Collins Dictionary of Medicine © Robert M. Youngson 2004, 2005

The transparent, elastic, curved structure behind the iris (colored part of the eye) that helps focus light on the retina.
Mentioned in: Eye Glasses and Contact Lenses, Glaucoma, Myopia, Presbyopia
Gale Encyclopedia of Medicine. Copyright 2008 The Gale Group, Inc. All rights reserved. 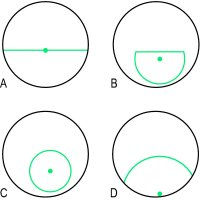 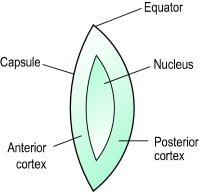 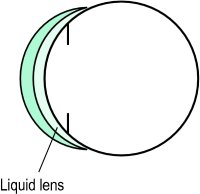 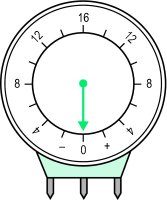 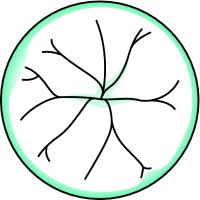 A. As in love and war so is in medicine the is no always nor never. It is probably the marfan that caused your neighbor kid the lens dislocation but you can never know for sure.
If you want there is nothing wrong in taking your boy for an annual check of an ophthalmologist.
More discussions about lens
This content is provided by iMedix and is subject to iMedix Terms. The Questions and Answers are not endorsed or recommended and are made available by patients, not doctors.