(in'tră-kahr'dē-ăl in-jek'shŭn)
Introduction of an agent via tube or needle directly into the heart.
Medical Dictionary for the Health Professions and Nursing © Farlex 2012

All supplies used in preparing and administering an injection should be sterile. The caregiver chooses the appropriate syringe size for the volume of fluid to be injected, the appropriate needle gauge for the type of fluid, and the appropriate needle length for the administration route and site, considering the amount of muscle and adipose tissue, mobility limitations, and other site-related factors. Hands should be thoroughly cleansed before and after the procedure, and gloves worn if preparing a chemotherapeutic agent. The prescribed dose is accurately measured. An appropriate site is identified by using anatomical landmarks, and the area is cleansed with an antiseptic swab (from the center outward) and time allowed for the antiseptic to evaporate. The needle is inserted at the appropriate angle, given the prescribed route. Intradermal injections use a short fine needle with the opening faced upward; the needle is placed nearly parallel to the surface of the skin and advanced far enough for the injected fluid to make a small bubble under the skin, then carefully removed; pressure that could cause the fluid to leak out onto the skin surface should be avoided. Subcutaneous injections should consist of no more than 1 ml. A short needle should be inserted at a 45° angle, without aspiration, and gentle pressure or no pressure applied to the site after needle removal. After insertion into muscle (the needle is inserted directed into the muscle, at a 90° angle), the syringe plunger is aspirated to ensure that no blood returns to prevent accidental injection into a blood vessel. The prescribed medication is injected slowly, then the needle is removed, and pressure is applied to the site with a dry sponge. A Z-track method helps to ensure that the medication remains in the muscle as desired and does not leak back into subcutaneous tissues. When administering an intravenous (IV) injection, the syringe is aspirated and blood obtained to be certain the needle is in the vein. When removing a needle after administering an IV injection directly into the vein, the caregiver lessens the chance of bleeding into soft tissue by applying firm pressure with a dry sponge while elevating the site above the heart for several minutes. However, the vast majority of intravenous injections are administered through an IV catheter or an IV fluid port with a needle or needleless device. Pressure is not applied when removing this device. The needle should not be recapped; both the needle and syringe should be disposed in a “sharps” container according to protocol. The injection time and site, any untoward responses to the injection, desired effects, and adverse reactions to the particular drug injected are recorded.

2. A solution introduced in this manner.
3. The state of being injected; congestion.

Parenteral administration of a long-acting medication or hormone.

A sterile solution of dextrose, salt, and water for use intravenously. It contains no antimicrobial agents.

The injection of anesthetic solution or other medicines into the epidural space of the spinal cord.

Injection of small amounts at a time until the total injection is complete.

An obsolete term originally meaning the injection of a substance beneath the skin. It is preferable to specify the route of administration, e.g., intramuscular, subcutaneous, intracutaneous, or intravenous.
See: local anesthesia

Introduction of anesthetic into the soft tissues adjacent to a tooth.

Injection into the heart.

Abbreviation: ICSI
A commonly used assisted reproduction technique, in which spermatozoa, usually from a man with obstructive azoospermia or a low sperm count, are introduced directly into the ova of his partner. Some oocytes become fertilized and can then be transferred to the woman's uterus, where they mature.

Injection into the skin, used in giving serums and vaccines when a local reaction is desired.
See: Intradermal Injections: Locating Sites and Administering

The injection of medicines into the tongue, usually done as an emergency measure when a vein suitable for use is not available because of circulatory collapse.

To avoid injury, newborn intramuscular injections should be administered in the middle third of the vastus lateralis muscle using a 5/8-in, 25-gauge needle.

Injection into the peritoneal cavity.

The injection into a vein or, more commonly, into an intravenous catheter of drugs, electrolytes, or fluids. The insertion of a needle directly into a vein (rarely necessary) requires a degree of skill that is easily obtained if proper instruction is obtained. The vein may be distended by applying a tourniquet with sufficient pressure to stop venous return but not arterial flow. The tourniquet is applied several inches above the injection site. If the patient does not have vascular collapse, the arterial pulse can be palpated; if not, the tourniquet is too tight. Heat applied to the area for 15 min before starting the injection will also help distend the vessels. The use of a needle attached to a 5- or 10-ml syringe will greatly facilitate controlling the course of the needle. It is best to insert the needle into the vein with the bevel side facing out and then, after the needle is in the vein, to rotate it so that the bevel is face in. There will be resistance as the needle goes through one side of the vein wall. The vein should be entered with the needle making only a narrow angle with the long axis of the vein. This will help to prevent pushing the needle completely through the vein. cutdown; intraosseous infusion;

Many liquid preparations are given by intravenous infusion. Those commonly used include isotonic saline, Ringer's lactate, dextrose 5% in sterile water, hyperalimentation fluids, lipids, vitamins, and numerous medications. The solution may be given continuously or by intermittent or bolus injection. The rate of infusion varies with the patient's needs.

Intravenous infusion usually is given through a vein in the hand or arm, but central veins or other peripheral veins may be used as indicated.

In patients with collapsed veins, it may be possible to make the veins apparent by placing a tourniquet around the arm or leg and then inserting a 23- or 25-gauge catheter into a tiny superficial vein. Instillation of sterile intravenous fluid into the vein while the catheter is in place will distend the entire larger vein proximal to the small vein. A larger needle or catheter can then be inserted into the larger vein.

A standardized preparation of albumin iodinated with the use of radioactive iodine, 131I.

A radiographic contrast medium combination of iodipamide and meglumine used to aid in x-ray examination of the gallbladder.

A radiopaque contrast medium used in investigating arteries of the brain as well as in the rest of the body, and in studying kidney function.

A preparation of iron suitable for parenteral use.

Because of the risk of anaphylaxis, a test dose should be given before starting an infusion of iron.

The injection of medicines and vaccines through the skin or intramuscularly without a needle. A nozzle ejects a fine spray of liquid at such speed as to penetrate but not harm the skin. The procedure is harmless and is esp. useful in immunizing a great number of persons quickly and economically.

A method of capital punishment by a combination of medications, typically, a sedative, a paralytic agent, an analgesic agent, and a fatal dose of potassium. Unlike other forms of execution (such as electrocution or the gas chamber), lethal injection is the only method that relies upon the direct participation of health care professionals. Some professional organizations (such as the American Medical Association) and several state boards with oversight over health care practic, have questioned whether the participation of health care professionals in lethal injection is appropriate, legal, or moral.

A standard preparation of the water-soluble parathyroid hormone. It increases the calcium content of the blood.

A standard preparation of the polypeptide hormones obtained from the posterior lobe of the pituitary body of healthy domestic animals.

A sterile solution of amino acids and short-chain peptides. They represent the approximate nutritive equivalent of casein, lactalbumin, plasma, fibrin, or other suitable proteins from which the hydrolysate is derived by acid, enzymatic, or other method of hydrolysis. It may contain dextrose or other carbohydrates suitable for intravenous infusion. It is used intravenously in the treatment of hypoproteinemia in patients who are unable to eat or absorb food.

An instillation (not an injection) into the rectum; an enema.

The injection into a vessel or into a tissue of a substance that will bring about obliteration of the vessel or hardening of the tissues used, e.g., to manage esophageal varices or malignant pleural effusions.

Radioactive l-selenomethionine in which the sulfur atom in the methionine has been replaced by selenium. The compound is used intravenously to investigate methionine metabolism.

Introduction of fluids or medications into the spinal canal, i.e., the intrathecal space.

Injection beneath the skin. Typical sites include the abdomen, upper or outer arm, and the thigh.
See: illustration

A rare term for the instillation of fluid into the introitus; a douche.

A sterile solution of antidiuretic hormone. 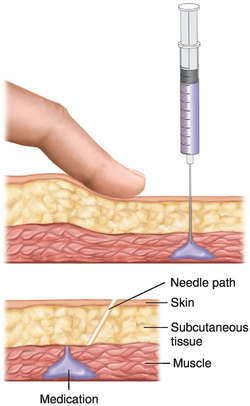 An injection technique in which the surface (skin and subcutaneous) tissues are pulled and held to one side before the needle is inserted deep into the muscle tissue in the identified site. The medication is injected slowly, followed by a 10-sec delay, at which time the needle is removed and the tissues are quickly permitted to resume their normal position. This provides a Z-shaped track, which makes it difficult for the injected drug to seep back into subcutaneous tissues.
See: illustration
Medical Dictionary, © 2009 Farlex and Partners