plugging of an artery by an embolus detached from a suppurating source.
Synonym(s): infective embolism
Farlex Partner Medical Dictionary © Farlex 2012

(pī-ē'mik em'bŏ-lizm)
Plugging of an artery by an embolus detached from a suppurating thrombus, producing an abscess.
Synonym(s): infective embolism, pyaemic embolism.
Medical Dictionary for the Health Professions and Nursing © Farlex 2012

Obstruction of a blood vessel caused by an air bubble.

Air may enter a vessel postoperatively, during intravenous injections, after failure to purge intravenous lines, or as a result of rupture of a central line balloon. NOTE: A very small amount of air in a vessel or intravenous tubing is not hazardous.

When an air or gas embolism is suspected in the systemic venous circulation, echocardiography should be used to confirm its presence. The suspected site of gas entry should be secured and flooded with normal saline to prevent entry of more gas into the circulation. One hundred percent oxygen should be administered to the patient by nonrebreather mask. The patient should be immediately repositioned with the right atrium above the gas entry site, so that air will be trapped there and not move into the pulmonary circulation or the right heart. A central venous catheter should be placed into the central venous circulation and any gas bubbles and air aspirated from the catheter. Intravenous fluids and inotropic medications may be needed to support blood pressure and pulse.

Prevention: All air should be purged from the tubing of all IV administration sets before hookup and when solution bags or bottles are changed; air elimination filters should be used close to the patient; infusion devices with air detection capability should be used, as well as locking tubing, locking connection devices, or taped connections. For central lines, to increase peripheral resistance and prevent air from entering the superior vena cava, the patient should be instructed to perform a Valsalva maneuver as the stylet is removed from the catheter, during attachment of the IV tubing, and when adapters or caps are changed on ports.

The entry of amniotic fluid through a tear in the placental membranes into the maternal circulation. This rare event may occur at any gestational age, but most commonly during labor, delivery or in the immediate postpartum period. The contents of the fluid (e.g., shed fetal cells, meconium, lanugo, vernix) may produce pulmonary or cerebral emboli. Cardiac arrest and disseminated intravascular coagulation (DIC) commonly occur. Maternal death is a frequent complication

Embolism due to injected drugs, debris, or talc, often resulting in pulmonary infarction.

Abbreviation: FE
Embolism caused by globules of fat obstructing small blood vessels in the brain, lungs, and skin. It frequently occurs after fracture of long and pelvic bones or after orthopedic surgery and has been linked to episodes of acute pancreatitis, sickle-cell crisis, diabetes mellitus, osteomyelitis, and liposuction. Effects may be mild and undetected but can be severe, leading to acute respiratory distress syndrome, multiple organ dysfunction syndrome, or disseminated intravascular coagulation. Those most at risk for FE are males age 20 to 40 injured in serious motor vehicle accidents and elderly adults after hip fracture.

Findings often include agitation, restlessness, delirium, convulsions, coma, tachycardia, tachypnea, dyspnea, wheezing, blood-tinged sputum, and fever, esp. during the first 12 to 72 hr after injury or insult, when fat emboli are most likely to occur. Petechiae may appear on the buccal membranes, conjunctival sacs, and the chest and axillae in a vestlike distribution. Retinal hemorrhages may be seen on fundoscopic examination. If fat globules lodge in the kidneys, renal failure may occur. Laboratory values are nonspecific but may show hypoxemia, suddenly decreased hemoglobin and hematocrit levels, leukocytosis, thrombocytopenia, increased serum lipase, and fat globules in urine and/or sputum.

There is evidence that FE can be prevented when long bone fractures are immobilized immediately. Limited movement and gentle handling of any fractures before fixation may help prevent fat globule release. Patients at risk, i.e., those with fractures of long bones, severe soft tissue bruising, or fatty liver injury, are assessed for symptoms of fat embolism. Chest radiograph reports are reviewed for evidence of mottled lung fields and right ventricular dilation, and the patient's electrocardiogram is checked for large S waves in lead I, large Q waves in lead III, and right axis deviation.

The patient's respiratory and neurological status are monitored frequently for signs of hypoxemia. The treatment for the syndrome is nonspecific: good general supportive care of fluid balance, vital signs, oxygenation, electrolytes, and hemodynamics. The patient is placed in the high Fowler's, orthopneic, or other comfortable position to improve ventilation; high-concentration oxygen is administered, and endotracheal intubation and mechanical ventilation are initiated if the patient cannot maintain a PaO2 of 60 mm Hg on 40% oxygen by face mask. Positive and end-expiratory pressure may be used to keep functional alveoli inflated to improve functional reserve capacity. IV fluid administration helps prevent shock. Deep breathing exercises and incentive spirometry to open and stabilize atelectatic lung areas may improve lung capacity and ventilation. Prescribed pharmacological agents are administered; these may include steroids, heparin, and anxiolytic agents such as diazepam.

Embolism arising from the venous circulation that enters the arterial circulation by crossing from the right side of the heart to the left side through a patent foramen ovale or septal defect. It may occasionally cause stroke in a patient with a deep venous thrombosis. 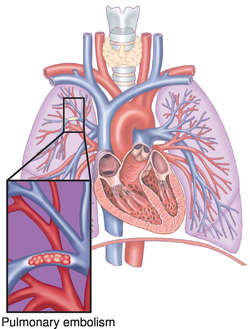 Abbreviation: PE
Embolism of the pulmonary artery or one of its branches, usually caused by an embolus from a blood clot in a lower extremity. Roughly 10% to 15% of patients with the disease will die. Risks for it include genetic predisposition, recent limb or pelvic fracture, burns, surgery (esp. hip or knee replacement), long-term immobility, enforced immobilization (long car or plane trips or hospitalization), pregnancy, use of estrogen-containing hormonal contraceptives, postmenopausal hormones, atrial fibrillation, vascular injury, IV drug abuse, polycythemia vera, heart failure, autoimmune hemolytic anemia, sickle cell anemia, thrombocytosis, dehydration, , advanced age, cancer, and obesity. Diagnosis is challenging because symptoms are nonspecific and often misinterpreted and may mimic other diseases of the limbs, abdomen, or chest. It is often assumed that a sudden, unexpected death occurring after a hospitalization was caused by an unsuspected PE, which is the third most common cause of death in the U.S. When a pulmonary embolism is suspected, evaluation includes oximetry, chest x-ray, blood tests for D-dimer, and, depending on local hospital practices, duplex venous ultrasonography of the legs, ventilation/perfusion scanning, or multidetector CT angiography of the chest. Pulmonary angiography was formerly the standard test but is now rarely performed because it is invasive, poses risk to the patient, and requires angiographic skill and excellent radiographic equipment. Treatment includes the administration of anticoagulants (low molecular weight heparins or unfractionated heparins, followed by oral warfarin). Oxygen is administered as prescribed by nasal cannula or mask. In critically ill patients, intubation and mechanical ventilation may be required. Thrombolytic drugs may be needed for massive emboli, i.e., those that cause shock or that impair the filling of the right atrium and ventricle with blood. Thrombolectomy may be attempted in critically ill patients when a competent surgical team is available. See: illustration; thrombosis, deep venous

In the hospitalized patient, early mobilization, administration of prophylactic anticoagulants, and compression stockings (elastic or pneumatic) may prevent deep venous thrombosis (DVT). Vital signs, oxygen saturation, respiratory effort, breath sounds, cardiac rhythm, and urinary output are monitored closely in affected patients. Signs of deterioration are promptly reported. The nurse assists with diagnostic studies and medical treatment and provides explanations of procedures and treatments, analgesics for pain, prescribed medications, supplemental oxygen, patient education, and emotional support. Once the pain is stable, the patient is encouraged to resume normal activities. After a pulmonary embolism most patients remain on anticoagulant therapy for at least 6 months. The patient is taught about taking the medication dosage precisely as prescribed, bleeding signs to be reported, avoidance of over-the-counter and prescription drugs that may influence anticoagulation, regulation of foods high in vitamins, and the need for frequent blood tests to ensure appropriate levels of anticoagulation. See: International Normalized Ratio.

In patients who cannot use anticoagulants, a filtering device may be inserted transvenously into the vena cava to try to prevent blood clots from embolizing from the legs to the heart and lungs.

An embolism made up of purulent matter that arises from the site of an infection caused by a pyogenic (pus-forming) organism. It can result in the spread of infection to a distant site. Synonym: pyemic embolism
Medical Dictionary, © 2009 Farlex and Partners