(skō-tō'mă, skō-tō'mă-tă), Do not confuse this word with scatoma.
1. An isolated area of varying size and shape, within the visual field, in which vision is absent or depressed.
2. A blind spot in psychological awareness.
[G. skotōma, vertigo, fr. skotos, darkness]
Farlex Partner Medical Dictionary © Farlex 2012

, pl. scotomata (skō-tō'mă, -mă-tă)
1. An isolated area of varying size and shape, within the visual field, in which vision is absent or depressed.
2. A blind spot in psychological awareness.
[G. skotōma, vertigo, fr. skotos, darkness]
Medical Dictionary for the Health Professions and Nursing © Farlex 2012

A blind spot or area in the field of vision. This may be caused by GLAUCOMA, MULTIPLE SCLEROSIS, MIGRAINE, retinal disorders or a brain tumour.
Collins Dictionary of Medicine © Robert M. Youngson 2004, 2005

An area of lost or depressed vision within the visual field surrounded by an area of normal vision. Survivors of retinoblastoma frequently develop scotomas.
Mentioned in: Retinoblastoma
Gale Encyclopedia of Medicine. Copyright 2008 The Gale Group, Inc. All rights reserved.

An area of partial or complete blindness surrounded by normal or relatively normal visual field. See angioscotoma; hemianopia; quad-rantanopia.
absolute scotoma A scotoma in which vision is entirely absent in the affected area. See retinoschisis; relative scotoma.
annular scotoma See arcuate scotoma; ring scotoma.
arcuate scotoma Scotoma running from the blind spot into the nasal visual field and following the course of the retinal nerve fibres. A double arcuate scotoma extending both in the upper and lower part of the field may join to make an annular scotoma or ring scotoma. A common cause is glaucoma. Syn. comet scotoma; scimitar scotoma. See arcuate fibres; retinal raphe; Bjerrum's scotoma.
Bjerrum's scotoma An arcuate scotoma extending around the fixation point (usually located between the 10º and 20º circles), which occurs in open-angle glaucoma. It often extends from the horizontal midline to the optic disc (Fig. S4). Syn. Bjerrum's sign. See Roenne nasal step; Seidel's scotoma.
central scotoma A scotoma involving the fixation area.
comet scotoma See arcuate scotoma.
congruous s'. Scotomas in the two visual fields that are identical. They form a single defect in the binocular visual field. Such scotomas are often the result of lesions in the visual cortex.
flittering scotoma See scintillating scotoma.
incongruous s'. Scotomas in the two visual fields that differ in one or more ways. Such scotomas are often the result of lesions in the optic tract.
junction scotoma A visual defect due to a lesion (e.g. a pituitary tumour) at the junction of one optic nerve with the chiasma where it is believed that the inferior nasal fibres of the contralateral optic nerve loop before passing backward to the optic tract. The visual defects typically consist of an upper temporal quadrantanopia in the field of the contralateral eye with, usually, a temporal hemicentral scotoma in the ipsilateral eye. Some authors attribute these visual defects to prechiasmal compression of one optic nerve plus compression of the whole chiasma. See Wilbrand's knee.
negative scotoma A scotoma of which the person is unaware. The physiological blind spot is an example of a negative scotoma but it is usually referred to as a physiological scotoma.
paracentral scotoma  A scotoma involving the area adjacent to the fixation area.
physiological scotoma See negative scotoma.
positive scotoma A scotoma of which the person is aware.
relative scotoma A scotoma in which there is some vision left or in which there is blindness to some stimuli, but not to others. See absolute scotoma.
ring scotoma 1. An annular scotoma surrounding the fixation point. It may be formed by the development of two arcuate scotomas. Syn. annular scotoma. 2. A circular area in the peripheral field of view at the edge of a strong convex spectacle lens which is not seen (Fig. S5). This scotoma is due to the prismatic effect at the edge of the lens and unlike other scotomas, not from a pathological condition. When the head turns the ring scotoma also turns and it is then called a roving ring scotoma. See jack-in-the-box phenomenon.
roving ring scotoma See jack-in-the-box phenomenon; ring scotoma.
scimitar scotoma See arcuate scotoma.
scintillating scotoma The sudden appearance of a transient, shimmering scotoma with a zigzag outline of brightly coloured lights (also called a fortification spectrum or fortification figures). It usually occurs as one of the first symptoms of a migraine attack. Syn. flittering scotoma. See migraine; teichopsia.
Seidel's scotoma An arcuate scotoma extending above and below the blind spot found in glaucoma. Syn. Seidel's sign. See Bjerrum's scotoma. 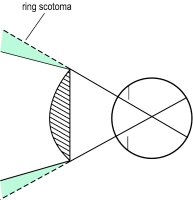