A cervix (the structure at the bottom of the uterus) that is incompetent is abnormally weak, and therefore it can gradually widen during pregnancy. Left untreated, this can result in repeated pregnancy losses or premature delivery.

Incompetent cervix is the result of an anatomical abnormality. Normally, the cervix remains closed throughout pregnancy until labor begins. An incompetent cervix gradually opens due to the pressure from the developing fetus after about the 13th week of pregnancy. The cervix begins to thin out and widen without any contractions or labor. The membranes surrounding the fetus bulge down into the opening of the cervix until they break, resulting in the loss of the baby or a very premature delivery.

Some factors that can contribute to the chance of a woman having an incompetent cervix include trauma to the cervix, physical abnormality of the cervix, or having been exposed to the drug diethylstilbestrol (DES) in the mother's womb. Some women have cervical incompetence for no obvious reason.

Incompetent cervix is suspected when a woman has three consecutive spontaneous pregnancy losses during the second trimester (the fourth, fifth and sixth months of the pregnancy). The likelihood of this happening by random chance is less than 1%. Spontaneous losses due to incompetent cervix account for 20-25% of all second trimester losses. A spontaneous second trimester pregnancy loss is different from a miscarriage, which usually happens during the first three months of pregnancy.
The physician can check for abnormalities in the cervix by performing a manual examination or by an ultrasound test. The physician can also check to see if the cervix is prematurely widened (dilated). Because incompetent cervix is only one of several potential causes for this, the patient's past history of pregnancy losses must also be considered when making the diagnosis.

Treatment for incompetent cervix is a surgical procedure called cervical cerclage. A stitch (suture) is used to tie the cervix shut to give it more support. It is most effective if it is performed somewhere between 14-16 weeks into the pregnancy. The stitch is removed near the end of pregnancy to allow for a normal birth.
Cervical cerclage can be performed under spinal, epidural, or general anesthesia. The patient will need to stay in the hospital for one or more days. The procedure to remove the suture is done without the need for anesthesia. The vagina is held open with an instrument called a speculum and the stitch is cut and removed. This may be slightly uncomfortable, but should not be painful.
Some possible risks of cerclage are premature rupture of the amniotic membranes, infection of the amniotic sac, and preterm labor. The risk of infection of the amniotic sac increases as the pregnancy progresses. For a cervix that is dilated 3 centimeters (cm), the risk is 30%.
After cerclage, a woman will be monitored for any preterm labor. The woman needs to consult her obstetrician immediately if there are any signs of contractions.
Cervical cerclage can not be performed if a woman is more than 4 cm dilated, if the fetus has already died in her uterus, or if her amniotic membranes are torn and her water has broken.

Diethylstilbestrol (DES) — DES is a drug given to women a generation ago to prevent miscarriage. At that time it was not known that female children born of women who had been given DES would show a higher rate for cervical and other reproductive abnormalities, as well as a rare form of vaginal cancer, when they reached reproductive age.
Effacement — The thinning out of the cervix that normally occurs along with dilation shortly before delivery.
Preterm labor — Labor before the thirty-seventh week of pregnancy. 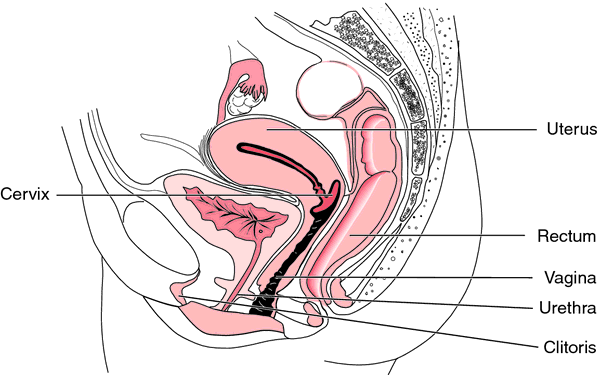 A laxity or undue wideness of the inner mouth (internal os) of the outlet of the womb that commonly leads to repeated, painless miscarriages after the 16th week of pregnancy. The condition is treated by the insertion of a purse-string stitch of non-absorbable material which is removed shortly before term.
Collins Dictionary of Medicine © Robert M. Youngson 2004, 2005

Feedback
Flashcards & Bookmarks ?
Please log in or register to use Flashcards and Bookmarks. You can also log in with
Flashcards ?
My bookmarks ?
+ Add current page to bookmarks
Mentioned in ?
References in periodicals archive ?
Despite several reported successes with cerclage in preventing mid-trimester pregnancy losses and preterm labour, there remains doubt as to the real value and place of cerclage in managing recurrent pregnancy loss due to incompetent cervix. In a meta analysis of randomized control trials by Drakeley et al (10), there was no statistical difference in pregnancy outcome between intervention and non intervention groups.
Pregnancy outcome after cerclage for cervical incompetence at the University of Port Harcourt Teaching Hospital, Port Harcourt
Rooney and Calhoun conclude that abortionists who merely point out the risk of infection or an incompetent cervix as potential abortion complications, without informing women how these may lead to future prematurity and its sequelae, may not escape liability.
Abortion linked to subsequent premature births
My aim always has been to restore the incompetent cervix to normal anatomy and physiology to assure that pregnancy comes to term.
Cervical tension and retention of mucus also critical
Complications requiring hospitalization during the pregnancies included incompetent cervix; threatened preterm labor; premature rupture of membranes (PROM); PPROM; hemolysis, elevated liver enzymes, and low platelet count (HELPP) syndrome; and placenta previa.
Pregnancy safe after radical trachelectomy: study of 80 patients. (Clinical Rounds)
This test may be most useful in identifying women with an incompetent cervix, especially in the first two trimesters.
New Preterm Labor Markers for Early Diagnosis
Many physicians suspect that multiple abortions lead to an increased incidence of future reproductive problems such as incompetent cervix which increases the chance of miscarriage.
Abortion and the Practice of Medicine: 25 Years of Increasing Schizophrenia
An incompetent cervix will need to be monitored, possibly as an inpatient.
I'm pregnant, why am I bleeding?
Placement of a suture around an incompetent cervix to prevent premature pregnancy loss was first described more than 50 years ago (1,2)--but the few randomized studies that have been published (all of them in the past decade) devote very little attention to technique.
A stepwise approach to cervical cerclage: effective cerclage can be accomplished using a simple, standardized technique that emphasizes anatomic landmarks and high placement of the tape
EAR: Among women who present with a clinical picture of acute cervical insufficiency, also known as an "incompetent cervix," how common are infections?
The role of infection
Tests showed Katrina had an "incompetent cervix", where the small canal at the base of the womb shortens and dilates before the baby is due.
A simple hormone ended my miscarriage misery; Despairing Katrina Cliffe thought she'd never have a second child until her doctor tried out a new treatment on her. By Chloe Lambert
A careful history is essential to determine whether the patient experienced labor in the previous pregnancy loss, to distinguish incompetent cervix from premature labor.
Cerclage is too complex for a one-size-fits-all approach
After adjusting the results for possible confounding variables such as prior preterm delivery, cerclage, incompetent cervix, duration of intravenous tocolysis, and obesity, investigators calculated an odds ratio of 2.4 for preterm delivery in patients who were not maintained on oral tocolysis.
Large study confirms benefit of oral tocolysis maintenance