Impetigo refers to a very localized bacterial infection of the skin. There are two types, bullous and epidemic.

Impetigo is a skin infection that tends primarily to afflict children. Impetigo caused by the bacterium Staphylococcus aureus (also known as staph) affects children of all ages. Impetigo caused by the bacteria called group A streptococci (also know as strep) are most common in children ages two to five.
The bacteria that cause impetigo are very contagious. They can be spread by a child from one part of his or her body to another by scratching, or contact with a towel, clothing, or stuffed animal. These same methods can pass the bacteria on from one person to another.
Impetigo tends to develop in areas of the skin that have already been damaged through some other mechanism (a cut or scrape, burn, insect bite, or vesicle from chickenpox).

The first sign of bullous impetigo is a large bump on the skin with a clear, fluid-filled top (called a vesicle). The bump develops a scab-like, honey-colored crust. There is usually no redness or pain, although the area may be quite itchy. Ultimately, the skin in this area will become dry and flake away. Bullous impetigo is usually caused by staph bacteria.
Epidemic impetigo can be caused by staph or strep bacteria, and (as the name implies) is very easily passed among children. Certain factors, such as heat and humidity, crowded conditions, and poor hygiene increase the chance that this type of impetigo will spread rapidly among large groups of children. This type of impetigo involves the formation of a small vesicle surrounded by a circle of reddened skin. The vesicles appear first on the face and legs. When a child has several of these vesicles close together, they may spread to one another. The skin surface may become eaten away (ulcerated), leaving irritated pits. When there are many of these deep, pitting ulcers, with pus in the center and brownish-black scabs, the condition is called ecthyma. If left untreated, the type of bacteria causing this type of impetigo has the potential to cause a serious kidney disease called glomerulonephritis. Even when impetigo is initially caused by strep bacteria, the vesicles are frequently secondarily infected with staph bacteria.
Impetigo is usually an uncomplicated skin condition. Left untreated, however, it may develop into a serious disease, including osteomyelitis (bone infection), septic arthritis (joint infection), or pneumonia. If large quantities of bacteria are present and begin circulating in the bloodstream, the child is in danger of developing an overwhelming systemic infection known as sepsis.

Characteristic appearance of the skin is the usual method of diagnosis, although fluid from the vesicles can be cultured and then examined in an attempt to identify the causative bacteria.

Uncomplicated impetigo is usually treated with a topical antibiotic cream called mupirocin. In more serious, widespread cases of impetigo, or when the child has a fever or swollen glands, antibiotics may be given by mouth or even through a needle placed in a vein (intravenously).

Prognosis for a child with impetigo is excellent. The vast majority of children recover quickly, completely, and uneventfully.

Prevention involves good hygiene. Handwashing; never sharing towels, clothing, or stuffed animals; and keeping fingernails well-trimmed are easy precautions to take to avoid spreading the infection from one person to another.

Systemic — Involving the whole body; the opposite of localized.
Ulcer — An irritated pit in the surface of a tissue.
Vesicle — A bump on the skin filled with fluid.

[im″pĕ-ti´go]
a contagious skin disorder, caused by streptococci, staphylococci, or a combination of organisms and marked by vesicles or bullae that become pustular, rupture, and form yellow crusts; called also impetigo contagiosa or impetigo vulgaris. Impetigo usually occurs in children, especially very young infants because of their low resistance, and is spread by direct contact with the moist discharges of the lesions. If not properly treated, it can be serious or even fatal to newborn infants. Isolation of the patient is recommended if patient hygiene is poor or the patient is a newborn in a hospital. Gowns and gloves are worn if soiling is likely. Impetigo is a particular problem for hospital patients, who may become infected by infected hospital staff. Treatment may consist of local applications of an antibiotic ointment, keeping the lesions and surrounding skin clean, and exposing the lesions to air to encourage drying. Systemic antibiotics are often recommended. (See Atlas 2, Part G).
bullous impetigo a highly contagious type of impetigo, caused by Staphylococcus aureus and characterized by large pustules surrounded by reddened areas; transmission is by direct contact, by fomites, or by autoinoculation causing secondary infections in areas of the body not originally affected.

(im'pe-tī'gō), Avoid the misspelling/mispronunciation infantigo.
A contagious superficial pyoderma, caused by Staphylococcus aureus and/or group A streptococci, which begins with a superficial flaccid vesicle that ruptures and forms a yellowish crust; most commonly occurs in children.
Synonym(s): impetigo contagiosa, impetigo vulgaris
[L. a scabby eruption, fr. im-peto (inp-), to rush on, attack]

(ĭm′pĭ-tī′gō)
n.
A contagious skin infection, usually of children, that is caused by staphylococcal or streptococcal bacteria and is marked by superficial pustules and thick yellow crusts, commonly on the face.
im′pe·tig′e·nous (-tĭj′ə-nəs) adj.

Dermatology A contagious streptococcal or staphylococcal infection that erodes the skin and dries to form a yellow-crusted sore; impetigo in children is associated with poor hygiene; it may follow RTIs in adults Clinical Pruritus, blisters, oozing, tightly adherent crusting, which tends to spread and form deep ulcers

(impĕ-tīgō)
A contagious superficial pyoderma, caused by Staphylococcus aureus or group A streptococci that begins with a superficial flaccid vesicle that ruptures to form a thick yellowish crust, most commonly occurring on the faces of children.
Synonym(s): impetigo contagiosa, impetigo vulgaris.
[L. a scabby eruption, fr. im-peto (inp-), to rush on, attack] 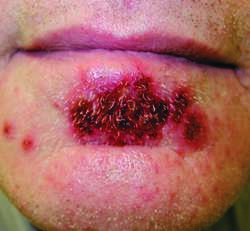 IMPETIGO
A bacterial infection of the skin, caused by streptococci or staphylococci and marked by yellow to red, weeping and crusted or pustular lesions, esp. around the nose, mouth, and cheeks or on the extremities. Associated symptoms include itching, burning, and regional lymphadenopathy; glomerulonephritis is a rare but serious complication. The disease is common in children and adults and may develop after trauma or irritation to the skin. illustration; impetiginous (-tij'i-nus), adjective

The infection is highly contagious and spreads easily among infants, children, and the elderly, with outbreaks related to such predisposing factors as poor hygiene, crowded and unclean living conditions, warm climate, malnutrition, and anemia. Topically applied mupirocin ointment, related drugs, or oral agents effective against staphylococcus and streptococcus are used to treat the infection. Mupirocin also eliminates nasal carriage of the offending organisms.

The appearance, location, and distribution of lesions are documented, along with any associated symptoms (pruritus, pain). Family members are taught to keep the skin clean and dry, removing exudate 2 to 3 times daily by washing the lesions with soap and water; warm saline soaks or compresses may be applied to remove stubborn crusts. Patients and families are taught the importance of not sharing washcloths, towels, or bed linens; the need for thorough handwashing and frequent bathing with a bactericidal soap; and the urgency for early treatment of any purulent eruption to limit spread to others.

Prescribed treatment must be continued for 7 to 10 days even if lesions have healed. Nonprescription antihistamines may be used to reduce itching. The fingernails should be cut and, if necessary, mittens applied to prevent further in-jury if the patient is unable to avoid scratching. Diversional activities appropriate to the patient's developmental stage are encouraged to distract from local discomforts. Black patients may develop deeper inflammation than whites and should be informed that this may result in hypopigmentation or hyperpigmentation changes after the inflammation has subsided. The school nurse or employer is notified of the infection, and family members are checked for evidence of impetigo. The patient can return to school or work when all lesions have healed.

A rare infection, usually occurring in infants, caused by a strain of Staphylococcus aureus that produces a toxin that splits the epidermis.
illustration

A rare and occasionally life-threatening eruption that typically occurs in the third trimester of pregnancy. It is pathologically indistinguishable from pustular psoriasis. Synonym: Hebra disesae.

A common, highly infectious, skin disease caused by STAPHYLOCOCCUS infection. Impetigo is commonest in children, and in hot, moist climates. In temperate areas, widespread impetigo is usually an indication of inadequate standards of personal hygiene. It feature rapidly spreading small blisters which soon turn to golden-green crusts. Treatment is by thorough skin cleaning and the use of antibiotic ointment.

(impĕ-tīgō)
Contagious dermatologic pyoderma, caused by Staphylococcus aureus and/or group A streptococci, which begins with a superficial flaccid vesicle that ruptures and forms a yellowish crust; most commonly occurs in children.
[L. a scabby eruption, fr. im-peto (inp-), to rush on, attack]

Q. do you know anything about impetigo? there is any cure for this?

A. antibiotics? not for me! maybe something else? thanks..
More discussions about impetigo