a bandage of cloth impregnated with plaster of Paris, liquid glass, or the like, which hardens soon after its application. See: cast (2).
Farlex Partner Medical Dictionary © Farlex 2012

(ban'daj)
1. A piece of soft, usually absorbent gauze or other material applied to a limb or other part of the body as a dressing. 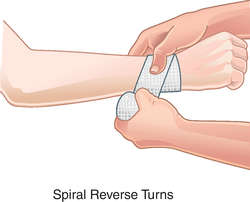 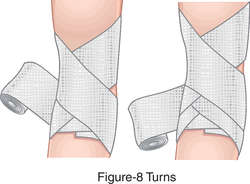 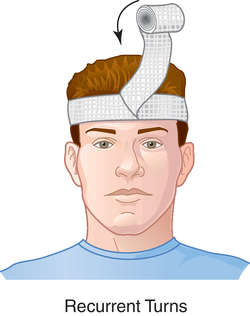 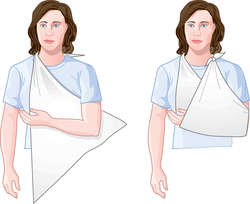 APPLYING BANDAGES
2. To cover by wrapping with a piece of gauze or other material.

Skin-to-skin contact will, if continuous, cause ulceration or infection.

A single wide cravat or several narrow ones used to hold a dressing in place or to exert moderate pressure.

A bandage made of adhesive tape.

An elastic bandage applied to an amputation stump to control postoperative edema and to shape the stump. The elastic bandage is applied in a recurrent or figure-of-eight fashion with more pressure applied to the distal, rather than the proximal, portion of the limb.

A bandage in which one loop is brought around the sole of foot and the other around the ankle and is secured in front or on the side.

A bandage with a spica-type turn starting under the affected axilla, crossing over the shoulder of the affected side, and making the long loop under the opposite armpit.

An open bandage to the back, applied like a chest bandage, the point placed above the scapula of the injured side.

A suspensory bandage and compress for the breasts.

An adhesive bandage used in place of sutures to hold wound edges together. Filmy sterile adhesive strips have replaced the butterfly bandage.

A bandage applied to the head or shoulder or to a stump like a cap or hood.

A bandage applied to the chest, e.g., figure of eight (spica).

A bandage applied in circular turns about a part.
See: Bandaging with Circular and Spiral Turns

A bandage made of material that sticks to itself but not to other substances, used to bandage fingers and extremities or to build up pads.

A triangular bandage folded to form a band around an injured part.

A hand bandage to arrest bleeding or to produce pressure. The wrist is placed on the center of the cravat; one end is brought around over the fist and back to the starting point, and the same procedure is then repeated with the other end. The two ends are pulled tight, twisted, and carried around the fist again so that pressure is placed on the flexed fingers.

cravat bandage for fracture of clavicle

A bandage in which one first puts a soft pad 2 × 4 in (5.1 × 10.2 cm) in the forepart of the axilla. A sling is made by placing the point of the open bandage on the affected shoulder; the hand and wrist are laid on it and directed toward the opposite shoulder, and the point is brought over and tucked underneath the wrist and hand. The ends are then lifted; the bandage is laid flat on the chest; the covered hand is carried up on the shoulder; the ends are brought together in the back and tied, the tightness being decided by how high the shoulder should be carried. A cravat bandage is then applied horizontally above the broad part of the elbow and tied over a pad on the opposite side of the chest. Tightening this cravat retracts the shoulders and scapulae.

A bandage that covers the hand but leaves the fingers uncovered.

A T bandage for the ear. A piece is sewn across the right angle of the T bandage.

A bandage that can be stretched to exert continuous pressure. It usually is made of special weaves or of material containing rubber and is used on swollen extremities or joints, on the chest in empyema, on fractured ribs, or on the legs to support varicose veins.

A bandage in which the turns cross each other like the figure eight, used to retain dressings, to exert pressure for joints (or to leave the joint uncovered), to fix splints for the foot or hand, for the great toe, and for sprains or hemorrhage.
See: Apply Bandages: Figure 8

A roller bandage with oblique fixation at the wrist.

A triangular bandage in which the foot is placed on the triangle with the base of the bandage backward and behind the ankle, and the apex carried upward over the top of the foot. The ends are brought forward, folded once or twice, crossed and carried around the foot, and tied on top.

A triangular open sling bandage for support of the forearm.

A strip of cloth with each end split into two. The tails are used to cover prominences such as elbow, chin, nose, or knee.

A bandage that is most easily applied with the patient standing or lying on a pelvic rest. A spica bandage encircles the trunk and the crossing is placed either anteriorly or laterally. To bandage both groins, the double spica is used. Such a double bandage is used principally in applying a plaster cast.

Any bandage applied to the head, usually by wrap-around technique, that uses bony prominences as anchors or stays, and that carefully and completely covers the site of injury or the suture line.

A triangular bandage used for the heel.

A triangular open bandage of the hip. A cravat bandage or other band is tied around the waist; the point of another bandage is slipped under and rolled or pinned directly above the position of the wound. The base is rolled up and the ends are carried around the thigh, crossed, and tied.

, immovable bandage
A bandage for immobilizing a part.

A wide-meshed bandage used to make molds or immobilize parts of the body. The material is impregnated with a substance such as plaster of Paris, which is applied wet and hardens after drying.

A knee cravat in which triangular and the figure-of-eight bandages are used.

A bandage applied by fixing the initial end by a circular or oblique fixation at the ankle or with a figure-of-eight of the foot and ankle.

A bandage with split ends used for the trunk and limbs; a piece of roller to which slips are stitched in an imbricated fashion.
See: four-tailed bandage; Scultetus, Johannes

Neck spica: Bandage 2 1 2 in × 8 yd (6.4 cm × 7.3 m). Bandage following thyroid gland surgery: Roller bandage 2 1 2 in × 9 yd (6.4 cm × 8.2 m). Adhesive plaster bandage for thyroidectomy: Used to hold dressing on wound in place. A small dressing is applied to center of strip and then applied to back of neck. Special bandage: A double-loop bandage of the head and neck made by using a figure-of-eight turn.

A bandage applied obliquely to a limb, without reverses.

A bandage stiffened with a paste of plaster of Paris, which sets and becomes very hard.
See: cast (4)

A bandage for applying pressure, usually used to stop hemorrhage or prevent edema.

A bandage that covers a part or keeps dressings in place.

A towel or large handkerchief, folded variously and applied as a bandage of head, chest, breast, or abdomen.

A bandage over the end of a stump.

A bandage applied to a limb in such a way that the roller is inverted or half twisted at each turn so as to make it fit smoothly and resist slipping off the limb. See: spiral reverse bandage

A rubber roller bandage used to apply pressure to prevent swelling or hemorrhage of a limb. See: Esmarch bandage

An open bandage of the shoulder (spica bandage); a shawl bandage of both shoulders and neck.

A bandage in which a number of figure-of-eight turns are applied, each a little higher or lower, overlapping a portion of each preceding turn so as to give an imbricated appearance. This type of bandage is used to support, to exert pressure, or to retain dressings on the breast, shoulder, limbs, thumb, great toe, and hernia at the groin.
See: basic thumb spica

A roller bandage to be applied spirally.

A technique of twisting, in its long axis, a roller bandage on itself at intervals during application to make it fit more uniformly. These reverse folds may be necessary every turn or less often, depending on the contour of the part being bandaged.

A bandage that is wrapped crosswise on the back.

A bandage for supporting any part but esp. the breast or scrotum.

A bandage shaped like the letter T and used for the female perineum and, in certain cases, the head.
Synonym: buttocks bandage; T binder

A bandage split at the end.

A square bandage folded diagonally. When folded, the several thicknesses can be applied to afford support.