Parathyroid glands are four pea-sized glands located just behind the thyroid gland in the front of the neck. The function of parathyroid glands is to produce a hormone called parathyroid hormone (parathormone), which helps regulate calcium and phosphate in the body. Hyperparathyroidism is the overproduction of this hormone.

Often, there are no obvious symptoms or suspicion of hyperparathyroidism, and it is first diagnosed when a patient is discovered to be hypercalcemic during a routine blood chemistry profile. Patients may believe they have felt fine, but realize improvements in sleep, irritability, and memory following treatment. When symptoms are present, they may include development of gastric ulcers or pancreatitis because high calcium levels can cause inflammation and pain in the linings of the stomach and pancreas.
Most of the symptoms of hyperparathyroidism are those present as a result of hypercalcemia, such as kidney stones, osteoporosis, or bone degradation resulting from the bones giving up calcium. Muscle weakness, central nervous system disturbances such as depression, psychomotor and personality disturbances, and rarely, even coma can occur. Patients may also experience heartburn, nausea, constipation, or abdominal pain. In secondary hyperparathyroidism, patients may show signs of calcium imbalance such as deformities of the long bones. Symptoms of the underlying disease may also be present.
Most commonly, hyperparathyroidism occurs as the result of a single adenoma, or benign tumor, in one of the parathyroid glands. About 90% of all cases of hyperparathyroidism are caused by an adenoma. The tumors are seldom cancerous. They will grow to a much larger size than the parathyroid glands, often to the size of a walnut. Genetic disorders or multiple endocrine tumors can also cause a parathyroid gland to enlarge and oversecrete hormone. In 10% or fewer of patients with primary hyperparathyroidism, there is enlargement of all four parathyroid glands. This condition is called parathyroid hyperplasia.

Hyperparathyroidism cases will usually be referred to an endocrinologist, a physician specializing in hormonal problems, or a nephrologist, who specializes in kidney and mineral disorders.
Patients with mild cases of hyperparathyroidism may not need immediate treatment if they have only slight elevations in blood calcium level and normal kidneys and bones. These patients should be regularly checked, probably as often as every six months, by physical examination and measurement of kidney function and calcium levels. A bone densitometry measurement should be performed every one or two years. After several years with no worsened symptoms, the length of time between exams may be increased.
Patients with more advanced hyperparathyroidism will usually have all or half of the affected parathyroid gland or glands surgically removed. This surgery is relatively safe and effective. The primary risks are those associated with general anesthesia. There are some instances when the surgery can be performed with the patient under regional, or cervical block, anesthesia. Often studies such as ultrasonography prior to surgery help pinpoint the affected areas.

Forcing fluids and reducing intake of calcium-rich foods can help decrease calcium levels prior to surgery or if surgery is not necessary.

Removal of the enlarged parathyroid gland or glands cures the disease 95% of the time and relief of bone pain may occur in as few as three days. In up to 5% of patients undergoing surgery, chronically low calcium levels may result, and these patients will require calcium supplement or vitamin D treatment. Damage to the kidneys as a result of hyperparathyroidism is often irreversible. Prognosis is generally good, however complications of hyperparathyroidism such as osteoporosis, bone fractures, kidney stones, peptic ulcers, pancreatitis, and nervous system difficulties may worsen prognosis.

Demineralization — A loss or decrease of minerals in the bones.
Endocrine — Glands and hormone secretions in the body circulation.
Phosphate — An organic compound necessary for mineralization of bone and other key cellular processes.

[hi″per-par″ah-thi´roid-izm]
abnormally increased activity of the parathyroid gland; it may be either primary or secondary. Primary hyperparathyroidism is associated with either neoplasia (chiefly adenomas) or hyperplasia; adenomas of the parathyroids account for about 85 per cent of all cases. Since hyperparathyroidism is a common cause of increased calcium levels, hypercalcemia discovered during routine serum chemistry profiles often leads to diagnosis of the condition.

An excess of parathyroid hormone leads to alteration in the function of cells of bone, renal tubules, and gastrointestinal mucosa. It may result in kidney stones and calcium deposits in the renal tubules; in generalized decalcification of bone (osteomalacia), resulting in pain and tenderness of bones and spontaneous fractures, and in hypercalcemia that could lead to muscular weakness and gastrointestinal symptoms such as anorexia, nausea, vomiting, and abdominal pains.

Secondary hyperparathyroidism develops as a compensatory mechanism when the serum calcium level is persistently below normal, as in chronic renal disease, vitamin D deficiency, or intestinal malabsorption syndromes, all of which can cause insufficient absorption of calcium and vitamin D.

The National Institutes of Health (NIH) Consensus Development Conference on Diagnosis and Management of Asymptomatic Primary Hyperparathyroidism addressed the diagnosis and management of the condition. Symptoms can be vague, and are most often related to elevated calcium levels; determinations of calcium and parathyroid hormone levels are required. The use of thiazide diuretics or lithium can elevate levels of both parathyroid hormone and calcium, so that the levels should be evaluated after discontinuation of these medications before a diagnosis is made. Imaging studies may be helpful in diagnosis of a parathyroid adenoma or determination of its location.

Candidates for medical management of hyperparathyroidism can have a mildly elevated serum calcium level. There should be no history of life-threatening hypercalcemia, and renal and bone status should be normal. The patient should be monitored frequently for alterations in blood pressure, serum calcium and creatinine levels, creatinine clearance, urinary calcium, and bone density. Dehydration and immobilization should be avoided and diuretics should be used with caution. Dietary calcium should be neither liberalized nor restricted. Treatment of hypertension and replacement of estrogen in post-menopausal women are also recommended.

Surgical treatment is indicated when parathyroid-related symptoms involve the skeletal, renal, or gastrointestinal systems. Other indications include markedly elevated serum calcium level (1 to 1.6 mg per dL [0.25 to 0.40 mmol per L] above accepted normal range); history of an episode of life-threatening hypercalcemia; reduced creatinine clearance (30% less than that expected); presence of kidney stones on radiograph with markedly elevated urinary calcium excretion (greater than 400 mg per 24 hours [10 mmol per day]); substantially reduced bone mass as determined by direct measurement (more than 2 standard deviations below that expected); significant neuromuscular or psychological symptoms without other obvious cause; request by the patient for surgery; anticipation of problems with follow-up; and coexistent illnesses that complicate management. The usual procedure is a subtotal parathyroidectomy that leaves some parathyroid tissue to continue normal endocrine function.
Patient Care. Postoperative care includes careful monitoring of the patient for complications of hemorrhage, infection, hypoparathyroidism and hypocalcemia, and damage to the laryngeal nerve.

When the patient returns from surgery, the operative site is assessed carefully. The side and back of the neck, as well as the anterior dressing, should be observed for any bleeding. The amount and other characteristics of drainage are noted and recorded, vital signs are monitored closely, and the patient is observed for signs of respiratory difficulty. Accumulations of subcutaneous fluid must be watched carefully as they can contribute to infection and tissue necrosis. Unless otherwise indicated, the patient is placed in the semi-Fowler position postoperatively. The rationale for this is that it makes breathing easier, promotes drainage from the operative site, and decreases pressure on the skin and suture line. At the time dressings are changed, wound drainage is noted. A milky drainage after feeding could indicate a chylous fistula, a rare complication resulting from injury to the thoracic duct during surgery or postoperative damage to and necrosis of adjacent tissues.

Mild, transient hypoparathyroidism and resultant hypocalcemia occur in about 70 per cent of patients after parathyroidectomy, probably because the removal of parathyroid tissue demands readjustment of the body to the decreased production of parathyroid hormone, to the interrupted blood supply to the gland, and to any trauma to the parathyroid tissue left after surgery. Patients with transient postoperative hypoparathyroidism will exhibit symptoms of hypocalcemia and neuromuscular irritability. The patient should be monitored carefully for any signs of tetany. In addition to nervousness, hyperreflexia of tendons, convulsions, and prolonged Q-T interval on the electrocardiogram, the patient may present positive chvostek's and trousseau's signs. Laboratory data will show a serum calcium deficit.

Intravenous calcium gluconate (10 per cent) is administered to counteract the hypocalcemia. If the condition persists and the patient can tolerate oral medication, the calcium can be given by mouth. Therapy is often needed for only a few weeks until the transient hypocalcemia is over; however, some level of hypocalcemia is considered desirable as it acts as a stimulant to the remaining parathyroid tissue. 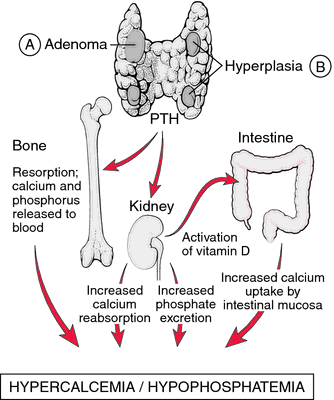 (hī'pĕr-par'ă-thī'royd-izm),
A condition due to an increase in the secretion of the parathyroids, causing elevated serum calcium, decreased serum phosphorus, and increased excretion of both calcium and phosphorus, calcium stones and sometimes generalized osteitis fibrosa cystica.

(hī'pĕr-par'ă-thī'royd-izm)
A condition due to an increase in the secretion of the parathyroids, causing elevated serum calcium, decreased serum phosphorus, and increased excretion of both calcium and phosphorus, calcium stones, and sometimes generalized osteitis fibrosa cystica.

The result of excessive output of hormone from the PARATHYROID GLANDS that control deposition of calcium and phosphorus in the bones. The over-production is usually due to a tumour of the hormone-producing cells. There is OSTEOPOROSIS and excessive deposition of calcium in the soft tissues of the body such as the joint cartilages, tendons and muscles.