The ability of the eye to detect the differences in the spatial locations of two or more stimuli. Hyperacuity thresholds are not based on resolution and are usually below about 15 seconds of arc. Hyperacuity tests include vernier acuity, stereoscopic acuity, orientation discrimination in which differences in the tilts of lines must be detected, the movement displacement threshold, the vertical alignment of a cluster of dots, or the ability to bisect two parallel lines. Hyperacuity is less affected by optical defocus or light scattering (as occurs for example in corneal leukoma, cataract, vitreous haemorrhage) than is Snellen acuity and can therefore be helpful in assessing macular function behind a cataract or other media opacity before surgery (Fig. H4). See clinical maxwellian view system. 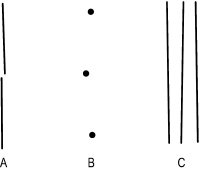 Fig. H4 Examples of hyperacuity tests (A, detection of lack of alignment of two lines; B, of three dots; C, of the tilt of one line)
Millodot: Dictionary of Optometry and Visual Science, 7th edition. © 2009 Butterworth-Heinemann

Feedback
Flashcards & Bookmarks ?
Please log in or register to use Flashcards and Bookmarks. You can also log in with
Flashcards ?
My bookmarks ?
+ Add current page to bookmarks
Mentioned in ?
References in periodicals archive ?
Hypnotic rehearsal utilizes attentional hyperacuity, loosened reality-testing, suspension of disbelief, and enhanced capacity for fantasy.
Hypnotic trance in Heart-Centered therapies
Continuing with the project, the program, of investigating the purported ability of virtuoso , Indo-Tibetan practitioners of "yogic directly perception of the limits of phenomena," the "partless particles" of that which exists; our framework suggests that the intensive focus on developing the technical ("soft tissue-high tech") means to do so, is based on what in contemporary cosmopolitan neuroscientific terms are principles recently established, namely neuroplasticity-mediated perceptual learning in the direction of hyperacuity, the "remarkable" (in Princeton biophysicist William Bialek's words) human capacity to perceive distances within the range of a fraction of the diameter of a photoreceptor cell, ie within the range of millionths of a meter.
Furthermore, relevant to our thesis in this context is the idea that the practice of mandala meditation, according to a large body of indirect but highly relevant data from the field of "environmental enrichment," is likely to trigger stem cell activation in the brain, neurogenesis (see Bushell 2001, 2005), which in turn would likely be associated with neuroplastically-mediated perceptual learning in the direction of the enhancement of the capacity for hyperacuity.
Returning to consideration of the claims of the tradition of Indo-Tibetan Kalachakra Mandala practice, we can already appreciate the potential range of human visual capacities, in terms not only of least light perception, but also of hyperacuity, eidetic imagery and memory, and subitizing, before continuing to consider the claims of that tradition.
In our attempt to develop a model based on potential parallels and homologous types of perceptual phenomena in the fields of neurology, anomalous psychology, etc, we may then now add to the capacities for eidetic imagery and subitizing, that of hyperacuity. For the size of a mustard seed is 1-2 millimeters in diameter, and hyperacuity as defined above refers to the ability to accurately perceive phenomena within the range of millionths of a meter, so this feat is still hypothetically within the range of possibility; creating this testable hypothesis within the interdisciplinary, cross cultural, anomalous psychological/psychophysical framework presented here.
Can long-term training in highly focused forms of observation potentially influence performance in terms of the observer model in physics? Consideration of adepts of observational meditation practice
(1) There also exists a wide variety of alternate methods for assessing visual function in AMD including contrast sensitivity, colour vision, shape discrimination and preferential hyperacuity perimetry.
Rod-mediated visual function in ageing and age-related macular degeneration
Integration regions for visual hyperacuity. Vision Research, 17(1), 89-93.
The acuity of echolocation: spatial resolution in sighted persons compared to the performance of an expert who is blind
Model of peripheral and amblyopic hyperacuity. Vision Research, 31, 967-982.
Perceptual Ability with Real-World Nighttime Scenes: Image-Intensified, Infrared, and Fused-Color Imagery
Fast perceptual learning in hyperacuity. Vision Research, 35, 3003-3013.
A computer program for training eccentric reading in persons with central scotoma
THE REICHERT Foresee Preferential Hyperacuity Perimeter (PHP) is now available in the UK from Grafton Optical.
Boost for AMD detection