[hung´ger]
a craving, as for food.
air hunger Kussmaul's respiration.
Miller-Keane Encyclopedia and Dictionary of Medicine, Nursing, and Allied Health, Seventh Edition. © 2003 by Saunders, an imprint of Elsevier, Inc. All rights reserved.

(hŭng'gĕr)
1. A desire or need for food.
2. Any appetite, strong desire, or craving.
[M.E., fr. O.E. hungor]
Medical Dictionary for the Health Professions and Nursing © Farlex 2012 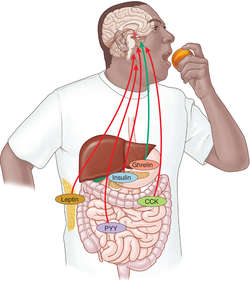 HORMONES AFFECTING HUNGER
1. A sensation resulting from lack of food, characterized by a dull or acute pain referred to the epigastrium or lower part of chest. It is usually accompanied by weakness and an overwhelming desire to eat. Hunger pains coincide with powerful contractions of the stomach. Hunger is distinguished from appetite in that hunger is the physical drive to eat, while appetite is the psychological drive to eat. Hunger is affected by the physiological interaction of hormones and hormone-like factors, while appetite is affected by habits, culture, taste, and many other factors. See: illustration
2. To have a strong desire.

The symptoms of abdominal discomfort, pain, contractions of the stomach and craving for food induced by a drop in the level of sugar in the blood passing through the HYPOTHALAMUS of the brain.
Collins Dictionary of Medicine © Robert M. Youngson 2004, 2005

Q. Im hungry all the time, even when my stomach is full.what causes this or what is solutions.

A. there are several possible causes for constant hunger. here is a symptom checker that i typed "always hungry" in, and it's suggestion. check if something looks reasonable to you:
http://www.healthline.com/symptomsearch?addterm=Always%20Hungry

Q. Why do I feel to eat sweet when I am not much hungry and I feel that it soothes my mind when I eat sweets….?

A. craving sweets can be a symptom to PMS...but it seems that it would be impossible for you :)
it can also be a symptom for "seasonal depression". sort of a mood swing during fall or winters. it's very common and has an ironic initials- SAD Seasonal Affective Disorder :)
here are other symptoms of SAD:
http://www.healthline.com/adamcontent/seasonal-affective-disorder
More discussions about hunger
This content is provided by iMedix and is subject to iMedix Terms. The Questions and Answers are not endorsed or recommended and are made available by patients, not doctors.

Feedback
Flashcards & Bookmarks ?
Please log in or register to use Flashcards and Bookmarks. You can also log in with
Flashcards ?
My bookmarks ?
+ Add current page to bookmarks
Mentioned in ?
References in classic literature ?
My recollections of her were accompanied by sensations of hunger, and these I felt when I was not hungry and when I had just eaten.
View in context
Such a series of actions we call a "behaviour-cycle." The degree of definiteness may vary greatly: hunger requires only food in general, whereas the sight of a particular piece of food raises a desire which requires the eating of that piece of food.
View in context
The poor wanderers, however, nearly starved with hunger and cold, were in no mood to enjoy the glories of these brilliant scenes; though they stamped pictures on their memory which have been recalled with delight in more genial situations.
View in context
He raised her and smiled with such kindness and affection that I felt sensations of a peculiar and overpowering nature; they were a mixture of pain and pleasure, such as I had never before experienced, either from hunger or cold, warmth or food; and I withdrew from the window, unable to bear these emotions.
View in context
"First, we had for some days fared exceedingly hard, and suffered very great hunger; but at last we were wholly without food of any kind except sugar, and a little wine and water.
"In one of these fits of lunacy or distraction I fell down and struck my face against the corner of a pallet-bed, in which my mistress lay, and with the blow the blood gushed out of my nose; and the cabin-boy bringing me a little basin, I sat down and bled into it a great deal; and as the blood came from me I came to myself, and the violence of the flame or fever I was in abated, and so did the ravenous part of the hunger. Then I grew sick, and retched to vomit, but could not, for I had nothing in my stomach to bring up.
Towards the morning I slept again, and when I awoke I fell into a violent passion of crying, and after that had a second fit of violent hunger. I got up ravenous, and in a most dreadful condition; and once or twice I was going to bite my own arm.
View in context
Why, they'd die of hunger! Well, then, leave us with our passions and thoughts, without any idea of the one God, of the Creator, or without any idea of what is right, without any idea of moral evil.
View in context
If, however, I found in my new home hard- ship, hunger, whipping, and nakedness, I had the consolation that I should not have escaped any one of them by staying.
View in context
Here they eagerly slaked their thirst; but, this being allayed, the calls of hunger became equally importunate.
If they have acquitted themselves well while living, they will be permitted to descend and enjoy this happy country; if otherwise they will but be tantalized with this prospect of it, and then hurled back from the mountain to wander about the sandy plains, and endure the eternal pangs of unsatisfied thirst and hunger.
View in context
Dummling did not think long, but went straight into the forest, where in the same place there sat a man who was tying up his body with a strap, and making an awful face, and saying: 'I have eaten a whole ovenful of rolls, but what good is that when one has such a hunger as I?
View in context