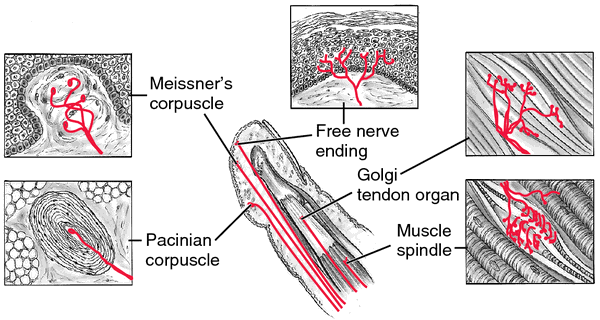 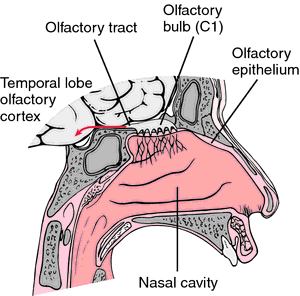 Structure of the olfactory receptors. (From Applegate, 2000.)
opiate r's (opioid r's) receptors that combine with particular opiates to create analgesia and certain other effects. Several different ones have been identified and assigned Greek letters; the μ receptor gives superior analgesia, and the κ receptor is associated with a low degree of physical dependency.
pain r's free nerve endings that are receptors for pain.
stretch receptor a sense organ in a muscle or tendon that responds to elongation.
T cell r's the characteristic marker of T lymphocytes (T cells) that recognize specific foreign antigens as well as self MHC antigens; both must be seen simultaneously to trigger T cell activation (see also lymphocyte activation). The receptor is not a complete immunoglobulin molecule but may contain heavy and light chain variable regions.
Miller-Keane Encyclopedia and Dictionary of Medicine, Nursing, and Allied Health, Seventh Edition. © 2003 by Saunders, an imprint of Elsevier, Inc. All rights reserved.

(rē-sep'tŏr, tōr),
1. A structural protein molecule on the cell surface or within the cytoplasm that binds to a specific factor, such as a drug, hormone, antigen, or neurotransmitter.
2. Any one of the various sensory nerve endings in the skin, deep tissues, viscera, and special sense organs.
[L. receiver, fr. recipio, to receive]
Farlex Partner Medical Dictionary © Farlex 2012

(rĭ-sĕp′tər)
n.
1. Physiology A specialized cell or group of nerve endings that responds to sensory stimuli.
2. Biochemistry A molecular structure or site on the surface or interior of a cell that binds with substances such as hormones, antigens, or neurotransmitters or is activated by events such as a change in the concentration of an ion.
The American Heritage® Medical Dictionary Copyright © 2007, 2004 by Houghton Mifflin Company. Published by Houghton Mifflin Company. All rights reserved.

(rĕ-sep'tŏr)
1. A structural protein molecule on the cell surface or within the cytoplasm that binds to a specific factor, such as a drug, hormone, antigen, or neurotransmitter.
2. Any one of the various sensory nerve endings in the skin, deep tissues, viscera, and special sense organs.
[L. receiver, fr. recipio, to receive]
Medical Dictionary for the Health Professions and Nursing © Farlex 2012

1. Any structure on or penetrating a plasma cell membrane or other membrane, capable of binding a specific external substance, such as a HORMONE, CYTOKINE, STEROID or NEUROTRANSMITTER, and, as a result, effecting a response within the cell. Plasma membrane receptors commonly respond by releasing a ‘second messenger’ within the cell.
2. A sensory nerve ending capable of receiving stimuli of various kinds and responding by the production of nerve impulses. The receptor has gradually come to be recognized as one of the fundamentally important entities in physiology, pathology, pharmacology and medical science generally.
Collins Dictionary of Medicine © Robert M. Youngson 2004, 2005

any cell or organ of an animal capable of detecting a stimulus, i.e. a change in the external or internal environment, and which subsequently brings about a response in the behaviour of the animal. A receptor, for example the eye, receives and transforms stimuli into sensory nerve impulses. Receptors vary in complexity from the end of a sensory neurone to a sense cell and complex organs such as the eye. They may occur externally (EXTEROCEPTOR) or internally (ENTEROCEPTOR) or be positioned to receive body movement (PROPRIOCEPTOR). They also may be classified according to the type of stimulus received, e.g. PHOTORECEPTOR, THERMORECEPTOR, CHEMORECEPTOR,MECHANORECEPTOR, electro-receptor. See also REFLEX ARC. In microorganisms specific cell surface components act as receptors, for example for the adsorption of PHAGES (in phage infection) or for the attachment of SEX PILI (in bacterial CONJUGATION).
Collins Dictionary of Biology, 3rd ed. © W. G. Hale, V. A. Saunders, J. P. Margham 2005

A molecular structure in a cell or on the surface of a cell that allows binding of a specific substance that causes a specific physiologic response.
Mentioned in: Alpha 1 -Adrenergic Blockers, Methadone
Gale Encyclopedia of Medicine. Copyright 2008 The Gale Group, Inc. All rights reserved.

A receptor capable of reacting when stimulated by light, such as the rods and cones of the retina. See cone cell; rod cell.
Millodot: Dictionary of Optometry and Visual Science, 7th edition. © 2009 Butterworth-Heinemann

(rĕ-sep'tŏr)
1. A structural protein molecule on cell surface or within cytoplasm that binds to a specific factor.
2. Any sensory nerve endings in the skin or elsewhere.
Medical Dictionary for the Dental Professions © Farlex 2012