(lim-fad'ĕ-nop'ă-thē),
1. Any disease process affecting a lymph node or lymph nodes.
2. The appearance of enlarged lymph nodes found on a radiologic examination of any kind.
[lymphadeno- + G. pathos, suffering]

A generic term for lymph node enlargement of any aetiology, benign or malignant. 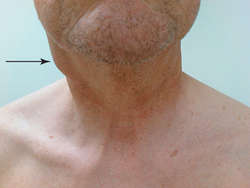 CERVICAL LYMPHADENOPATHY: Squamous cell carcinoma of the neck
Enlargement of lymph nodes (LN), typically to greater than 1.5 cm. The increased size is caused by activation and proliferation of lymphocytes and phagocytic white blood cells within the node or by invasion of the node by tumor. Most often, lymphadenopathy is found in nodes involved in local, regional, or systemic infections; it results occasionally from cancers. Lymphadenopathy may also be found in an array of other, less common illnesses, including thyroiditis, thyrotoxicosis, autoimmune diseases (e.g., rheumatoid arthritis), sarcoidosis, and drug reactions (e.g., phenytoin). See: illustration

Enlarged LNs may be tender or not; tenderness often is present when lymph nodes swell rapidly (e.g., in response to infections, hypersensitivity reactions, or some fulminant lymphomas). Rock-hard, enlarged, and immobile LNs are typical of metastatic cancer, whereas rubbery LNs are found in lymphomas. LNs that do not resolve spontaneously within 4 to 6 weeks, or for which no obvious explanation exists, usually are sampled by biopsy or aspiration.

An enlargement of a lymph gland. The preauricular lymph node located 1 cm in front of the external ear drains the orbital region and is sometimes involved with eyelid and conjunctival infection (e.g. adult inclusion conjunctivitis, follicular conjunctivitis). Syn. adenopathy (although strictly speaking this term refers to the enlargement of any gland).

Q. my friend ate a bar of chocolate and now her left neck gland is swollen any ideas why? no other symptoms

A. it can be an infection -just like brandon said- or although this is rare, it can also be an allergic reaction.
if it is an infection, you can usually find such other infection symptoms like : fever, pain in that swollen area, increased white blood cells (in blood work test), etc.

if it is an allergy, usually it will fade away itself in couple of days, or you can just try to consume anti-allergic drugs, such as : loratadine and maybe combined with dexamethasone.

Feedback
Flashcards & Bookmarks ?
Please log in or register to use Flashcards and Bookmarks. You can also log in with
Flashcards ?
My bookmarks ?
+ Add current page to bookmarks
TheFreeDictionary presents:
Write what you mean clearly and correctly.
Mentioned in ?
References in periodicals archive ?
Ocular No ocular involvement involvement (n = 39) (n =16) Mean age 57.1 [+ or -] 15.5 48.0 [+ or -] 13.7 Female/male ratio 35/4 10/6 BHL (a) in radiography 34 (87.2%) 15 (93.8%) Increased ACE (b) 29 (74.4%) 8 (50.0%) ACE (b) level 77.1 [+ or -] 40.9 61.7 [+ or -] 33.9 Visual acuity at 0.83 [+ or -] 0.19 0.90 [+ or -] 0.14 last visit Systemic treatment 28 (71.8%) 5 (31.3%) Immunosuppression 14 (35.9%) 0 (0.0%) P value Mean age 0.045 Female/male ratio 0.048 BHL (a) in radiography 0.66 Increased ACE (b) 0.12 ACE (b) level 0.19 Visual acuity at 0.15 last visit Systemic treatment 0.007 Immunosuppression 0.005 (a) Bilateral hilar lymphadenopathy; (b) angiotensin-converting enzyme.
Ocular Manifestations of Biopsy-Proven Pulmonary Sarcoidosis in Korea
In present study, bilateral hilar lymphadenopathy plus pulmonary opacity was the most common radiological presentation of sarcoidosis.
Sarcoidosis--a clinicoradiological profile of 30 patients
In most cases (except for the classic presentation of arthritis, erythema nodosum, and bilateral hilar lymphadenopathy known as Lofgren's syndrome), biopsy of the affected organ should be obtained.
Sneaky sarcoidosis or a metastatic masquerade?--A case of nodular sarcoidosis
Chest X-ray showed right hilar lymphadenopathy (LAP).
Acute tumor lysis syndrome secondary to a single-dose methylprednisolone in acute lymphoblastic leukemia/ Akut lenfoblastik losemide tek doz metilprednizolona sekonder olarak gelisen akut tumor lizis sendromu
Tularemia used as an air-born biological weapon would likely result in symptoms 3-5 days after the agent is inoculated into the community and present as a rapid outbreak of undifferentiated febrile illness with incipient pneumonia, pleuritis, and hilar lymphadenopathy (Dennis et.
Another agent of bio-terrorism: tularemia
Pleural thickening with a nodular mass within lung parenchyma and prominent hilar lymphadenopathy favors a diagnosis of adenocarcinoma with pleural involvement.
Pulmonary adenocarcinoma simulating malignant mesothelioma. (Case Report)
He was admitted to a hospital after a chest radiograph indicated bilateral lower lobe infiltrates with extensive mediastinal and hilar lymphadenopathy. He was presumed to have bacterial pneumonia and was treated with antibiotics.
Coccidioidomycosis - United States, 1991-1992
Chest imaging and fluorodeoxyglucose-positron emission tomography found nonspecific pulmonary nodules and hilar lymphadenopathy. Additional unremarkable studies included bone marrow biopsies, lung biopsies, and sinus biopsies.
Disseminated Histoplasmosis with Miliary Histoplasmosis, Neurohistoplasmosis, and Histoplasma capsulatum Bacteremia in Probable Neurosarcoidosis
Sarcoidosis is a multisystem disease of unknown etiology defined by noncaseating granulomas that may be seen on lung imaging as bilateral hilar lymphadenopathy and/or interstitial lung disease (ILD) [1, 2].
Sarcoidosis and Systemic Sclerosis: Strange Bedfellows
CT Chest shows lung mass in case of primary pulmonary lymphoma and pleural, mediastinal and hilar lymphadenopathy in case of secondary pulmonary lymphoma (Ref.
Secondary pulmonary Hodgkin Lymphoma: a case report
The CT scan confirmed the stability of the pulmonary nodules with no changes to heart size and no evidence of mediastinal or hilar lymphadenopathy.
Subcutaneous and Pulmonary Dirofilariasis with Evidence of Splenic Involvement
X-ray chest (PA) view showed bilateral hilar lymphadenopathy (fig-2).
HEERFORDT-WALDENSTROM SYNDROME UVEOPAROTID FEVER: REVIEW OF THE LITERATURE AND A CASE PRESENTATION