[liv´er]
the large, dark-red gland located in the upper right portion of the abdomen, just beneath the diaphragm (see also color plates). Its manifold functions include storage and filtration of blood; secretion of bile; conversion of sugars into glycogen; the synthesis and breakdown of fats and the temporary storage of fatty acids; and the synthesis of serum proteins such as certain of the alpha and beta globulins, albumin (which helps regulate blood volume), and fibrinogen and prothrombin (which are essential coagulation factors).
Storage Functions. The liver can store up to 20 per cent of its weight in glycogen and up to 40 per cent of its weight in fats. The basic fuel of the body is a simple form of sugar called glucose. This comes to the liver as one of the products of digestion, and is converted into glycogen for storage. It is reconverted to glucose, when necessary, to keep up a steady level of sugar in the blood. This is normally a slow, continuous process, but in emergencies the liver, responding to epinephrine in the blood, releases large quantities of this fuel into the blood for use by the muscles.

As the chief supplier of glucose in the body, the liver is sometimes called on to convert other substances into sugar. The liver cells can make glucose out of protein and fat. This may also work in reverse: the liver cells can convert excess sugar into fat and send it for storage to other parts of the body.

In addition to these functions, the liver builds many essential proteins and stores up certain necessary vitamins until they are needed by other organs in the body.
Protective Functions. The liver disposes of worn-out blood cells by breaking them down into their different elements, storing some and sending others to the kidneys for disposal in the urine. It also filters and destroys bacteria. One of the most important functions of the liver is the detoxification of drugs, alcohol, and environmental poisons.

The liver also helps to maintain the balance of sex hormones in the body. A certain amount of female hormone is normally produced in males, and male hormone in females. When the level of this opposite sex hormone rises above a certain point, the liver takes up the excess and disposes of it.

Finally, the liver polices the proteins that have passed through the digestive system. Some of the amino acids derived from protein metabolism cannot be used by the body; the liver rejects and neutralizes these acids and sends them to the kidneys for disposal.
Liver Function Tests. There are many laboratory procedures that measure some aspect of liver functions. Serum bilirubin and urine bilirubin and urobilinogen levels provide information about the metabolism and excretion of bile pigments. Albumin and many of the alpha and beta globulins are synthesized by the liver. Disease that impairs their synthesis is shown by serum protein electrophoresis. Blood-clotting tests, such as one-stage prothrombin time, demonstrate a reduced synthesis of vitamin K–dependent coagulation factors by the liver.

There are many enzymes that occur in the liver and are released into the blood when there is liver damage or biliary obstruction. The ones most commonly determined in the laboratory are alkaline phosphatase, aspartate transaminase (AST), and alanine transaminase (ALT). AST and ALT are also commonly called (serum) glutamic-oxaloacetic transaminase (GOT or SGOT) and (serum) glutamic-pyruvic transaminase (GPT or SGPT). Alkaline phosphatase is elevated in patients with intrahepatic or extrahepatic obstruction of bile flow, as in cholestatic jaundice or in primary or metastatic carcinoma. AST and ALT are elevated in patients with hepatocellular injury as in acute viral or toxic hepatitis.

Both ultrasonography and radioisotope scans (scintiscans) are useful in demonstrating space-occupying lesions of the liver, such as cysts, abscesses, and tumors. Ultrasonography is an excellent tool for evaluating ascites or preparing for a liver biopsy. The scintiscans use technetium-99m sulfur colloid, which is taken up by the reticuloendothelial cells of the liver and spleen, or gallium-67, which has an affinity for abscesses and certain tumors. On a colloid scan, abscesses and tumors appear as filling defects or “cold spots”; on the gallium scan, they appear as “hot spots.”

A needle biopsy of the liver is useful in demonstrating the presence of cirrhosis, steatosis, alcoholic hepatitis, chronic hepatitis, and carcinoma. Liver biopsy is contraindicated in patients who have clotting defects, severe anemia, or a bacterial infection in an area to be traversed by the biopsy needle, for example, right lower lobar pneumonia.
Disorders of the Liver. The liver, with its many complex functions, can be damaged by various disorders and diseases, including hepatitis, cirrhosis, and abscess. Signs of liver damage include jaundice, ascites, uncontrolled bleeding resulting from a decrease in clotting factors, and increased sensitivity to drugs. 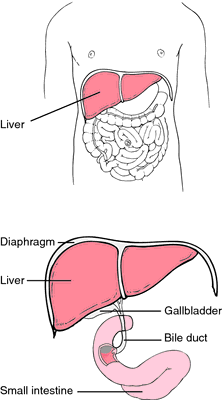 Liver. Bile, manufactured in the liver, is stored in the gallbladder; it passes through the bile duct into the duodenum, the upper end of the small intestine, where it aids in digestion.
fatty liver one affected with fatty infiltration, usually from alcohol abuse, jejunoileal bypass surgery, or occasionally diabetes mellitus; fat is in large droplets and the liver is enlarged but of normal consistency; patients are often asymptomatic but the condition can progress to hepatitis or cirrhosis if the underlying cause is not removed.
Miller-Keane Encyclopedia and Dictionary of Medicine, Nursing, and Allied Health, Seventh Edition. © 2003 by Saunders, an imprint of Elsevier, Inc. All rights reserved.

(liv'ĕr), [TA] Do not confuse this word with livor.
The largest gland of the body, lying beneath the diaphragm in the right hypochondrium and upper part of the epigastric region; it is of irregular shape and weighs from 1-2 kg, or about one fortieth the weight of the body. As an exocrine gland, it secretes bile; it initially receives most absorbed nutrients through the portal vein; it detoxifies drugs and many exogeneous substances and is also of great importance in fat, carbohydrate, and protein metabolism; also stores glycogen.
Synonym(s): hepar [TA]
[A.S. lifer]
Farlex Partner Medical Dictionary © Farlex 2012

(liv'ĕr) [TA]
The largest gland of the body, lying beneath the diaphragm in the right hypochondrium and upper part of the epigastrium; it is of irregular shape and weighs from 1-2 kg, or about 1/40 the weight of the body. It secretes bile and is also of great importance in both carbohydrate and protein metabolism.
Synonym(s): hepar [TA] .
Medical Dictionary for the Health Professions and Nursing © Farlex 2012