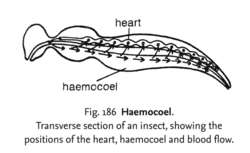 the body cavity within many invertebrates, including arthropods and molluscs, which is an expansion of part of the blood system. In contrast with the COELOM, the haemocoel never opens to the exterior nor does it contain germ cells.
Collins Dictionary of Biology, 3rd ed. © W. G. Hale, V. A. Saunders, J. P. Margham 2005

Feedback
Flashcards & Bookmarks ?
Please log in or register to use Flashcards and Bookmarks. You can also log in with
Flashcards ?
My bookmarks ?
+ Add current page to bookmarks
Mentioned in ?
References in periodicals archive ?
mellonella larvae when inoculated into their hemocoels.
Once the infective juveniles (IJs) gain access to the insect hemocoel, they release the symbiotic bacteria, which cause both a septicemia and a toxemia in the host.
Phoresis between Serratia marcescens and Steinernema carpocapsae (Rhabditida: Steinernematidae) during infection of Galleria mellonella (Lepidoptera: Pyralidae) larvae
Susceptibility was determined through oral exposure of cockroaches to acanthocephalan eggs, and, for some species, confirmed through direct injection of hatched parasites into the hemocoel (Moore and Crompton 1993).
Evolutionary patterns of altered behavior and susceptibility in parasitized hosts