[he″mah-to´mah]
A localized collection of extravasated blood, usually clotted, in an organ, space, or tissue; contusions (bruises) and black eyes are familiar forms that are seldom serious. Hematomas can occur almost anywhere on the body; they are almost always present with a fracture and are especially serious when they occur inside the skull, where they may produce local pressure on the brain. In minor injuries the blood is absorbed unless infection develops.
Cranial Hematoma. The two most common kinds of cranial hematomas are epidural and subdural (dural refers to the dura mater). Epidural hematoma occurs between the dura mater and the skull. It is most often caused by a heavy blow to the head that damages the upper surface of the dura mater. Blood seeps into the surrounding tissue, forming a tumorlike mass or hematoma. Since the skull is rigid, the hematoma presses inward against the brain; if the pressure continues, the brain can be affected. An epidural hematoma is the result of rupture of a relatively large meningeal artery, so that there is a rapid leakage of blood, causing increased intracranial pressure that can be fatal in a short period of time.

A subdural hematoma occurs beneath the dura mater, between the tough casing and the more delicate membranes covering the tissue of the brain, the pia-arachnoid. This kind of injury is more often caused by the head striking an immovable object, such as the floor, than by a blow from a moving object. There may be no severe head injury or fracture. A blow to the head can cause the brain to move violently, tearing blood vessels and forming a swelling that may include fluid from the brain tissue. A chronic subdural hematoma may remain and increase in size. (See also head injury.)
Symptoms. The most common symptoms of epidural hematoma occur within a few hours after injury. There can be a sudden or gradual loss of consciousness, partial or full paralysis on the side opposite the injury, and dilation of the pupil of the eye on the same side as the injury.

The symptoms of chronic subdural hematoma are similar to those of a brain tumor, and may come and go. There may be subtle personality changes, or the patient may become confused, weak in various parts of the body, vague, and drowsy.  Subdural hematoma occasionally occurs in babies as a result of birth injury. Unless the injury is discovered and treated at an early stage, the child's mental and physical development may be retarded, and spastic paralysis can occur. Early surgery is usually successful in preventing permanent symptoms and disabilities.
Treatment. Prompt surgery is the only treatment for epidural hematoma. The clotted blood is removed by a combination of suction and irrigation methods through openings made in the skull, and the bleeding is controlled. The same surgery is used for subdural hematomas.
Septal Hematoma. Injury to the nose sometimes causes hematoma of the nasal septum. Its symptoms include nasal obstruction and headache. The condition may be treated by incision and drainage or may clear up spontaneously in a few weeks. If the hematoma becomes infected, an abscess may result, requiring drainage and treatment with antibiotics. 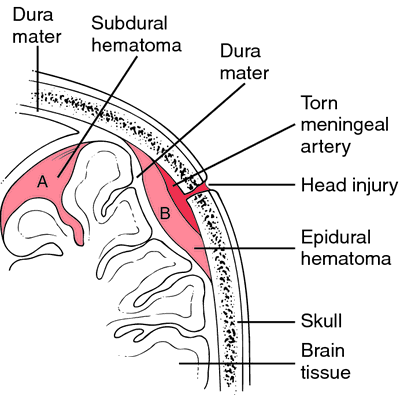 (hē'mă-tō'mă, hem-ă-),
A localized mass of extravasated blood that is relatively or completely confined within an organ or tissue, a space, or a potential space; the blood is usually clotted (or partly clotted), and, depending on its duration, may manifest various degrees of organization and decolorization.
[hemato- + G. -oma, tumor]
Farlex Partner Medical Dictionary © Farlex 2012

(hē'mă-tō'mă)
A localized mass of extravasated blood that is relatively or completely confined within an organ or tissue, a space, or a potential space; the blood is usually clotted, and, depending on how long it has been there, may manifest various degrees of organization and decolorization.
Synonym(s): haematoma.
Medical Dictionary for the Health Professions and Nursing © Farlex 2012

A swelling containing blood. It may result from injury (e.g. black eye) or from some blood disease, such as leukaemia. Note: also spelt hematoma.
Millodot: Dictionary of Optometry and Visual Science, 7th edition. © 2009 Butterworth-Heinemann

Q. What is hematoma?

A. "hem" means blood, it's a very common bruise - when you fall off your bicycles, you get hit. if you don't cut yourself too in the process- blood vessels usually get ripped and blood flows to that area. this causes a red/blue color. after a couple of weeks it'll change color to green and then yellow. this is the blood cells disintegrate.
More discussions about Hematoma
This content is provided by iMedix and is subject to iMedix Terms. The Questions and Answers are not endorsed or recommended and are made available by patients, not doctors.

Feedback
Flashcards & Bookmarks ?
Please log in or register to use Flashcards and Bookmarks. You can also log in with
Flashcards ?
My bookmarks ?
+ Add current page to bookmarks
Mentioned in ?
References in periodicals archive ?
Although very rare, umbilical cord hematoma (UCH) is a real serious complication of pregnancy.
Umbilical Cord Hematoma: A Case Report and Review of the Literature
Although rare, spontaneous upper airway hematoma haemorrhage in patients on anticoagulant therapy of varying severity has been reported [3-9].
Denture Induced Submandibular Hematoma in a Patient on Warfarin
Komiyama, "Fenestration using a scoring balloon Scoreflex[R] as troubleshooting for acute vessel closure due to intramural hematoma complication in percutaneous coronary intervention," Cardiovascular Intervention and Therapeutics, vol.
A Case of an Obstructive Intramural Haematoma during Percutaneous Coronary Intervention Successfully Treated with Intima Microfenestrations Utilising a Cutting Balloon Inflation Technique
A noncontrast CT scan of head was unremarkable while there was demonstration of a large retropharyngeal hematoma measuring 3.6 cm by 5.3 cm by 20 cm on a CT of the cervical spine with no evidence of fracture.
Traumatic Retropharyngeal Hematoma in a Patient Taking Clopidogrel
Aparici-Robles, "MRI findings in spinal subdural and epidural hematomas," European Journal of Radiology, vol.
Acute, Nontraumatic Spontaneous Spinal Subdural Hematoma: A Case Report and Systematic Review of the Literature
[3] reported that degeneration of the ligamentum flavum could potentiate hematoma. In addition, surgical procedures were performed for all cases described in previous reports and nonoperative therapy was not successful--as in our patient.
A Succession of MRI Scans Supports the Diagnosis of Lumbar Ligamentum Flavum Hematoma: A Case Report and Review of the Literature
Single versus double burr hole drainage of chronic subdural hematomas. A study of 267 cases.
Single versus double burr-hole drainage for chronic subdural hematoma: A study of relevant prognostic factors conducted in Pakistan
We report a case of a ruptured subcapsular hematoma in a preterm neonate undergoing surgery for bowel obstruction.
Unexpected extensive hemorrhage from a subcapsular hematoma of the liver during emergent laparotomy in a premature neonate
The spontaneous spinal epidural hematoma. A study of the etiology.
Spinal Subarachnoid Hemorrhage: Case Report/Spinal Subaraknoid Hemoraji: Olgu Sunumu
Initial laboratory tests showed an INR of 8, hemoglobin of 60 g/L, serum lipase at 1050 UI/L, and C-reactive protein at 250 mg/L A CT scan showed a parietal duodenal hematoma extended from the superior flexure of the duodenum to the duodenojejunal junction and severe acute pancreatitis with glandular necrosis of the pancreatic gland and retroperitoneal fat necrosis; the modified CT severity index was 10 points.
Intramural duodenal hematoma related to antivitamin K overdose, an unusual cause of acute pancreatitis: Three case presentations
The patient was operated with left fronto-parietal craniotomy, and subdural hematoma was evacuated.
Emergency Surgical Intervention to Treat a Wide Septated Subdural Hematoma in a Patient with ITP: A Case Report
Perirenal hematoma after extracorporeal shock wave lithotripsy (ESWL) is an unusual but underdiagnosed complication.
Perirenal hematoma extending to the ipsilateral scrotum region after shock wave lithotripsy treatment