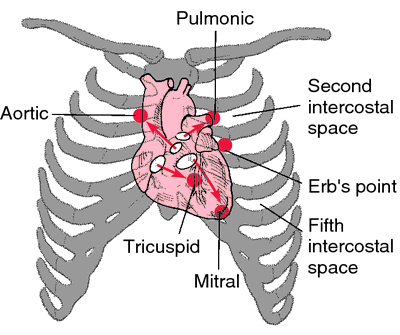 The sounds heard with a STETHOSCOPE applied over the heart. The most prominent sounds are caused by the closure of the heart valves. Heart abnormalities, especially valve disorders, cause additional sounds, called MURMURS. The timing and characteristics of these give much information about the state of the heart.
Collins Dictionary of Medicine © Robert M. Youngson 2004, 2005

(hahrt sowndz)
Noises made by muscle contraction and closure of heart valves during cardiac cycle.
Medical Dictionary for the Dental Professions © Farlex 2012

Feedback
Flashcards & Bookmarks ?
Please log in or register to use Flashcards and Bookmarks. You can also log in with
Flashcards ?
My bookmarks ?
+ Add current page to bookmarks
Mentioned in ?
References in periodicals archive ?
Bentley, "A robust heart sound segmentation and classification algorithm using wavelet decomposition and spectrogram", Workshop Classifying Heart Sounds, 2012.
Automatic Detection of Heartbeats in Heart Sound Signals Using Deep Convolutional Neural Networks
Heart sound signal can be considered as a periodic type noise signal since its location can be detected easily by any of linear time-frequency signal representations.
HEART SOUND LOCALIZATION AND REDUCTION IN TRACHEAL SOUNDS BY GABOR TIME-FREQUENCY MASKING
It should be noted that the heart sounds are not perfectly periodic due to the heart rate variability (HRV).
Fetal Heart Rate Monitoring from Phonocardiograph Signal Using Repetition Frequency of Heart Sounds
Moreover, the obtained results indicate that the shape related approaches are valuable for further improvements in the identification of the heart sounds.
Identification of S1 and S2 Heart Sound Patterns Based on Fractal Theory and Shape Context
In order to perform the long-term monitoring of cardiac activity (in both adults and fetuses during their intrauterine growth), it is more preferable to record phonocardiograms within a low-frequency band (40-90 Hz), which allows avoiding the overlapping of breath sounds with heart sounds down to the limit.
Short review of devices for detection of human breath sounds and heart tones
Listening to heart sounds is also used in monitoring for arrhythmia and diagnosing heart disease.2-4 However, traditional chest auscultation can be impossible depending on surgery, and extraneous noise can occur due to body movement.
The correlation between the first heart sound and cardiac output as measured by using digital esophageal stethoscope under anaesthesia
An adaptive filter with "Augmented ECG" as a reference signal was applied to filter out heart sounds from lung sounds in Iyer et al.
Performance evaluation of heart sound cancellation in FPGA hardware implementation for electronic stethoscope
The ability to label normal and abnormal heart sounds doubled; interpretation of normal and abnormal lung sounds improved by 50 percent; and bowel sounds interpretation improved threefold, demonstrating the effect of an adult-oriented, creative, yet practical method for teaching auscultation.
Looking is not seeing and listening is not hearing: effect of an intervention to enhance auditory skills of graduate-entry nursing students
"These human patient simulators have a full set of vital sign: heart sounds, breath sound, mouth sounds, pupillary reactions They breathe, they talk, their eyes are open, their level of consciousness changes."
Nurses expanding education with simulators
Additionally, a nested study on 34 patients to evaluate the accuracy and feasibility of transmission of echo pictures and heart sounds to Amrita Institute of Medical Sciences, Kochi via satellite using Indian Satellite Research Organization's network was also carried out.
Establishment of cardiovascular disease surveillance among the Adivasi population of Wayanad district
Kergaradec, who was a friend of Laennac--the inventor of the stethoscope--was the first doctor to use the stethoscope for auscultation of the fetal heart sounds. He thought he would hear the noise of water inside the uterus of a pregnant woman and be able to identify the position of the placenta.
Auscultation--the action of listening
During a routine examination, my doctor detected an abnormality in my heart sounds. He ordered an analysis of my blood and referred me to a cardiologist.
Longtime blood donor frustrated by bureaucratic rules