[hēl´ing]
1. the process of returning to health; the restoration of structure and function of injured or diseased tissues. The healing processes include blood clotting, tissue mending, scarring, and bone healing. See also wound healing.
2. the process of helping someone return to health; compassion by a health care provider is part of this. Authentic perception of the experience of illness in the particular person is the essential basis.
healing by first intention (healing by primary intention) wound healing in which restoration of continuity occurs directly by fibrous adhesion, without formation of granulation tissue; it results in a thin scar. 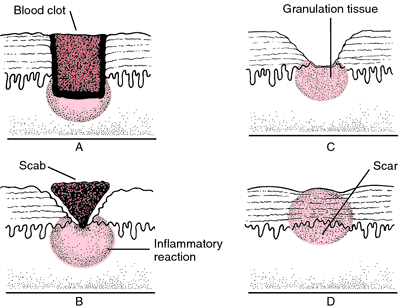 Healing by primary, or first intention. In primary wound healing there is no tissue loss. A, Incised wound is held together by a blood clot and possibly by sutures or surgical clamps. An inflammatory process begins in adjacent tissue at the moment of injury. B, After several days, granulation tissue forms as a result of migration of fibroblasts to the area of injury and formation of new capillaries. Epithelial cells at wound margin migrate to clot and seal the wound. Regenerating epithelium covers the wound. C, Scarring occurs as granulation tissue matures and injured tissue is replaced with connective tissue.
healing by second intention wound healing by union by adhesion of granulating surfaces, when the edges of the wound are far apart and cannot be brought together. Granulations form from the base and sides of the wound toward the surface. Healing by second intention occurs when there is tissue loss, as in extensive burns and deep ulcers. The healing process is more prolonged than in healing by primary intention because large amounts of dead tissue must be removed and replaced with viable cells. A, Open area is more extensive; inflammatory reaction is more widespread and tends to become chronic. B, Healing may occur under a scab formed of dried exudate, or dried plasma proteins and dead cells (eschar). C, Fibroblasts and capillary buds migrate toward center of would to form granulation tissue, which becomes a translucent red color as capillary network develops. Granulation tissue is fragile and bleeds easily. D, As granulation tissue matures, marginal epithelial cells migrate and proliferate over connective tissue base to form a scar. Contraction of skin around scar is the result of movement of epithelial cells toward center of wound in an attempt to close the defect. Surrounding skin moves toward center of wound in an effort to close the defect.
healing by third intention
1. wound healing by the gradual filling of a wound cavity by granulations and a cicatrix.
2. delayed primary closure.
wound healing see wound healing.

the slow filling of a wound cavity or ulcer by granulations, with subsequent cicatrization.

(hēl'ing thĭrd in-ten'shŭn)
The slow filling of a wound cavity or ulcer by granulations, with subsequent cicatrization.