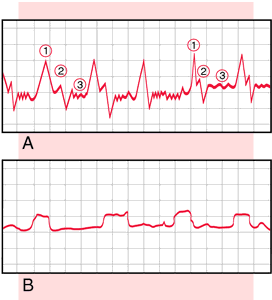 Normal versus abnormal Doppler arterial waveform patterns. A, Normal waveform with triphasic pattern of sharp upstroke and downstroke and good amplitude: (1) systolic component, (2) diastolic component, and (3) elastic wall rebound. B, Abnormal waveform with monophasic pattern of low amplitude and flat waves. This pattern indicates severe arterial obstruction. From Malarkey and McMorrow, 2000.
gray-scale ultrasonography B-mode ultrasonography in which the strength of echoes is indicated by a proportional brightness of the displayed dots.
real-time ultrasonography B-mode ultrasonography using an array of detectors so that scans can be made electronically at a rate of 30 frames a second.
Miller-Keane Encyclopedia and Dictionary of Medicine, Nursing, and Allied Health, Seventh Edition. © 2003 by Saunders, an imprint of Elsevier, Inc. All rights reserved.

(gră'skāl ŭl'tră-sŏ-nog'ră-fē)
The display of the ultrasound echo amplitude or signal intensity as different shades of gray, improving image quality compared with the obsolete black-and-white presentation.
Medical Dictionary for the Health Professions and Nursing © Farlex 2012