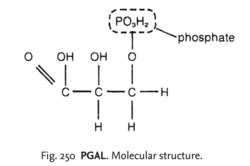 a three-carbon molecule produced from fructose diphosphate in GLYCOLYSIS. See Fig. 250 . PGAL is also a vital molecule in PHOTOSYNTHESIS, being produced in the CALVIN CYCLE from the phosphorylation and reduction of PGA by ATP and NADPH respectively which are produced in the LIGHT REACTIONS.Via a series of steps, two molecules of PGAL are rearranged to form six-carbon GLUCOSE.

Feedback
Flashcards & Bookmarks ?
Please log in or register to use Flashcards and Bookmarks. You can also log in with
Flashcards ?
My bookmarks ?
+ Add current page to bookmarks
TheFreeDictionary presents:
Write what you mean clearly and correctly.
Mentioned in ?
References in periodicals archive ?
Glyceraldehyde phosphate dehydrogenase (GAPDH) was the reference gene for normalization.
Expression analysis of glyoxalase I gene among patients of diabetic retinopathy
AF007546) and the mouse housekeeping gene glyceraldehyde phosphate dehydrogenase (mGAPDH; GenBank accession no.
Quantitative assessment of human [beta]-globin gene expression in vitro by TaqMan real-time reverse transcription-PCR: comparison with competitive reverse transcription-PCR and application to mutations or deletions in noncoding regions
Control genes for reverse-transcriptionpolymerase chain reaction: a comparison of beta actin and glyceraldehyde phosphate dehydrogenase [Letter].
Highly sensitive and specific fluorescence reverse transcription-PCR assay for the pseudogene-free detection of [beta]-actin transcripts as quantitative reference