[kap´sul, kap´sūl]
1. an enclosing structure, as a soluble container enclosing a dose of medicine.
2. a cartilaginous, fatty, fibrous, or membranous structure enveloping another structure, organ, or part. adj., adj cap´sular. 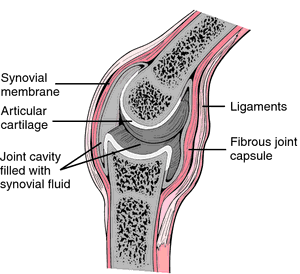 Capsule. Generalized structure of a synovial joint showing the joint or articular capsule. From Applegate, 2000.
articular capsule the saclike envelope that encloses the cavity of a synovial joint by attaching to the circumference of the articular end of each involved bone. Called also joint capsule.
adipose renal capsule the investment of fat surrounding the fibrous renal capsule, continuous at the hilus with the fat in the renal sinus.
bacterial capsule a gelatinous envelope surrounding a bacterial cell, usually polysaccharide but sometimes polypeptide in nature; it is associated with the virulence of pathogenic bacteria.
Bowman's capsule the globular dilatation forming the beginning of a renal tubule and surrounding the glomerulus. Called also glomerular capsule and malpighian capsule.
c's of the brain two layers of white matter in the substance of the brain; external capsule and internal capsule.
external capsule the layer of white fibers between the putamen and claustrum.
fibrous renal capsule the connective tissue investment of the kidney, which continues through the hilus to line the renal sinus.
Glisson's capsule a sheath of connective tissue accompanying the hepatic ducts and vessels through the hepatic portal. In hepatitis it may become stretched, which is a common cause of pain.
glomerular capsule Bowman's capsule.
capsule of heart pericardium.
internal capsule the fanlike mass of white fibers separating the lentiform nucleus laterally from the head of the caudate nucleus, the dorsal thalamus, and the tail of the caudate nucleus medially. The internal capsule carries both afferent and efferent fibers of the cerebral cortex.
joint capsule articular capsule.
capsule of lens the elastic sac enclosing the lens of the eye.
malpighian capsule Bowman's capsule.
capsule of pancreas a thin sheath of areolar tissue that invests the pancreas (but does not form a definite capsule), the septa of which extend into the gland and divide it into lobules.
renal c's the investing tissue around the kidney, divided into the fibrous renal capsule and the adipose renal capsule.
Tenon's capsule the connective tissue enveloping the posterior eyeball.
Miller-Keane Encyclopedia and Dictionary of Medicine, Nursing, and Allied Health, Seventh Edition. © 2003 by Saunders, an imprint of Elsevier, Inc. All rights reserved.

A double-walled rounded dilation that ensheaths the urinary tubule and the glomerulus, which has an inner (visceral) layer, formally the capsular epithelium, and an outer (parietal) layer, formally, the glomerular epithelium. It is marked by two poles:
(1) a vascular pole, into which blood flows through the afferent arterioles into the capillary network, and from the network into the efferent arterioles; and
(2) a urinary pole, which empties into the capsule’s proximal tubule.
Segen's Medical Dictionary. © 2012 Farlex, Inc. All rights reserved.

(glō-mer'yū-lăr kap'sŭl) [TA]
The expanded beginning of a nephron composed of an inner and outer layer: the visceral layer consists of podocytes that surround a tuft of capillaries (glomerulus); the parietal layer is simple squamous epithelium which becomes cuboidal at the tubular pole.
Medical Dictionary for the Health Professions and Nursing © Farlex 2012