[TA]
one of the numerous small pits in the mucous membrane of the stomach, the bases of which are perforated by gastric glands.
Synonym(s): foveola gastrica [TA]
Farlex Partner Medical Dictionary © Farlex 2012 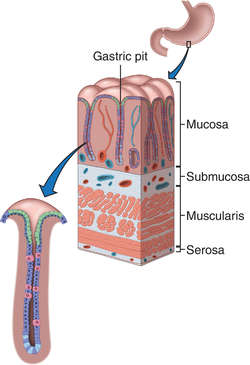 Any of many foveolae in the gastric mucosa into which the gastric glands open. See: illustration
See also: pit
Medical Dictionary, © 2009 Farlex and Partners