[kat´ah-rakt]
opacity of the lens of the eye or its capsule. adj., adj catarac´tous.
Causes and Symptoms. Some cataracts result from injuries to the eye, exposure to great heat or radiation, or inherited factors. The great majority, however, are “senile” cataracts, which are apparently a part of the aging process of the human body.

Blurred and dimmed vision are often the first symptoms. The patient may find that a brighter reading light is needed, or objects must be held closer to the eyes for better vision. Continued clouding of the lens may cause double vision; eventually there may be a need for frequent changes of eyeglasses. These symptoms do not necessarily indicate cataract, but if any of them are present, an ophthalmologist should be consulted immediately.
Treatment. The only known effective treatment for cataract is surgical removal of the lens (lens extraction or cataract extraction). The procedure of choice was formerly intracapsular extraction, with total removal of the lens within its capsule. This may be done by forceps or by cryoextraction using a supercooled metal probe that forms a bond with the lens capsule. The inner portion of the lens can be removed by emulsification and aspiration. More recently the removed cataract has been replaced with a plastic intraocular lens. In this procedure the inner portions of the lens (the nucleus and cortex) may be all that is removed; the capsule is retained and the intraocular lens is placed inside it.

The lens of the eye serves only to focus light rays upon the retina. After cataract extraction the loss of the natural lens is compensated for by either special eyeglasses or contact lenses. Implantation of a permanent artificial lens, either during cataract surgery or later, is an alternative to use of cataract spectacles and a removable contact lens.
Patient Care. Eye drops are administered to produce mydriasis and vasoconstriction. Because these patients may have extremely poor eyesight, care should be taken that they do not injure themselves. (See also vision.) Local anesthesia is usually preferred for the surgical procedure and preoperative medications are given to produce drowsiness. Ambulatory care surgery with same-day admission and discharge is becoming increasingly routine. Careful observation of the patient on follow-up visits is important. One needs to be on the alert for a complaint of pain in the eye followed by nausea and vomiting. These could be signs that the patient has increased intraocular pressure within the operative eye and measures need to be taken to reduce the pressure.
after-cataract any membrane of the pupillary area after extraction or absorption of the lens. See also secondary cataract.
atopic cataract cataract occurring, most often in the second to third decade, in those with longstanding atopic dermatitis.
brown cataract (brunescent cataract) senile cataract appearing as a brown opacity.
capsular cataract one consisting of an opacity of the capsule of the lens.
complicated cataract secondary cataract.
cortical cataract an opacity in the cortex of the lens.
hypermature cataract one in which the entire lens capsule is wrinkled and the contents have become solid and shrunken, or soft and liquid.
immature cataract (incipient cataract) an incomplete cataract; the lens is only slightly opaque and the cortex clear.
intumescent cataract a mature cataract that progresses; the lens becomes swollen from the osmotic effect of degenerated lens protein, and this may lead to secondary angle closure (acute) glaucoma.
lenticular cataract opacity of the lens not affecting the capsule.
mature cataract a cataract that produces swelling and opacity of the entire lens; cataracts are removed before maturity.
presenile cataract a subcapsular senile cataract in a person under 40 years of age.
secondary cataract a cataract, usually posterior subcapsular, that arises from either disease (especially iridocyclitis), degeneration (such as chronic glaucoma or retinal detachment), or surgery (such as glaucoma filtering or retinal reattachment).
senile cataract cataract with no obvious cause occurring in persons over 50 years old.
Miller-Keane Encyclopedia and Dictionary of Medicine, Nursing, and Allied Health, Seventh Edition. © 2003 by Saunders, an imprint of Elsevier, Inc. All rights reserved.

(kat'ăr-akt)
Complete or partial opacity of the ocular lens.
[L. cataracta fr. G. katarrhaktes a downrushing, a waterfall, fr. katarrhēgnymi, to break down, rush down]
Medical Dictionary for the Health Professions and Nursing © Farlex 2012 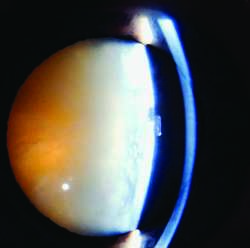 CATARACT: (Courtesy of Christine Chung, MD)
An opacity of the lens of the eye, usually occurring as a result of aging, trauma, endocrine or metabolic disease, intraocular disease, or as a side effect of the use of tobacco or certain medications, e.g., steroids. Cataracts are the most common cause of blindness in adults. See: illustration; visual field for illus.

Ninety percent of adults over 65 have cataracts.

Removal of the lens is the only effective treatment. In the U.S. about a million cataract surgeries are performed annually, usually as an outpatient, same-day procedure. Typically, the lens and its anterior capsule are removed by extracapsular extraction or by phacoemulsification, leaving the posterior capsule of the lens in place, and a posterior chamber intraocular lens is inserted where the patient’s own lens used to be. See: extracapsular extraction; intraocular lens; phacoemulsification

Preoperative: The procedure is explained to the patient. An antiseptic facial scrub is performed. Mydriatic and cycloplegic eye drops are instilled to dilate the pupil, followed by lidocaine jelly and betadine drops prior to surgery; osmotic diuretics may be given to reduce intraocular pressure. An intravenous access is initiated, and antibiotics, a sedative, short-acting general anesthetic, and a local anesthetic are provided.

Postoperative: The patient is instructed to wear a clear eyeshield if prescribed, and to call if experiencing pain, or loss of vision. Blurred vision the day of surgery is to be expected. Eye drops are to be placed as directed and the patient should not swim or strain himself. A postoperative checkup visit is scheduled for the day following surgery. Both patient and family are taught how to inspect the eye for redness or watering and to report these conditions as well as any photophobia or sudden visual changes; wash hands well and then to instill eye drops (antibiotic to prevent inflammation and steroids to reduce infection) as prescribed; and to maintain the eye patch and shield as prescribed by the surgeon. The patient should be taught to protect the eye from bright sunlight or glare by wearing dark glasses. The patient should not swim or strain himself or herself.

A cataract occurring in the capsule of the ocular lens.

A cataract that develops in the cortex of the lens. It has a spiky or spoked appearance on physical examination of the eye.

A cataract in which the lens solidifies and shrinks. This stage follows the mature stage.

An early cataract, too poorly developed to require therapy.

A cataract occurring in the lens.

, nuclear sclerotic c.
A cataract in which the central portion of the lens is opacified.

Abbreviation: PSC
A cataract between the posterior capsule and cortex. It is more common in younger patients, diabetics, and patients who use steroids. It tends to diminish near vision before it affects distance vision.
Synonym: posterior subcortical cataract; posterior cortical cataract

A cataract caused by exposure to radiation, esp. from sunlight.

A cataract occurring in an older person.

A cataract with opacity limited to certain layers of the lens.
Medical Dictionary, © 2009 Farlex and Partners

Opacification of the internal focusing lens of the eye (the crystalline lens) due to changes in hydration and denaturation of protein causing irreversible structural changes in the orderly arrangement of the fibres from which the lens is made. There may also be aggregation of crystallin protein in the lens. These changes may be CONGENITAL, the result of trauma, or, most commonly, an apparently spontaneous age-related effect. Some experts believe that age-related cataract is caused by ultraviolet radiation in sunlight but others disagree.
Collins Dictionary of Medicine © Robert M. Youngson 2004, 2005

(kat'ăr-akt)
Complete or partial opacity of the ocular lens.
Medical Dictionary for the Dental Professions © Farlex 2012

Q. What Is a Cataract? My father has cataract in his eye, which interferes a lot with his vision. What is cataract?

A. A senile cataract (or clouding of the eye), occurring in the aged, is characterized by an initial opacity in the lens, subsequent swelling of the lens and final shrinkage with complete loss of transparency. This condition as an effect on ones vision, and it is important to treat it early, as it becomes harder to treat as time goes by, and may eventually lead to blindness in that eye.

A. Yes, vitamins if not taken in required amount through diet may lead to vitamin deficiency. As deficiency in vitamin E -an antioxidant and vitamin B1 and B2 can lead to cataract. You must take them in required amount. Foods which have vitamin E are all vegetable oil, green leafy vegetables and egg. Cereals and fish are good source for vitamin B1 and vitamin B2 is surplus in milk and dairy products; eggs, cereals and green leafy vegetables.
http://www.youtube.com/watch?v=ezMQeIugWzY&eurl=http://www.imedix.com/health_community/vezMQeIugWzY_dissolve_cataracts_without_need_invasive_surgery_1?q=cataract&feature=player_embedded

Q. I had cataract surgery with iol implant, and ever since I have awful light sensitivity. Any ideas? I can't go into a "super store" without my sunglasses. My eyes ache at the end of the day. My doctor says "I don't know!"

A. May sound a bit silly question, but have you tried to consult your ophthalmologist (eye doctor, e.g. the one that performed the operation) about it? Cataract surgery, although considered very successful, isn't problem-free. Primary physician may not have the necessary specialization to deal with these subjects.
More discussions about cataract
This content is provided by iMedix and is subject to iMedix Terms. The Questions and Answers are not endorsed or recommended and are made available by patients, not doctors.

Feedback
Flashcards & Bookmarks ?
Please log in or register to use Flashcards and Bookmarks. You can also log in with
Flashcards ?
My bookmarks ?
+ Add current page to bookmarks
Mentioned in ?
References in periodicals archive ?
In vitro, diosgenin could significantly inhibit the osmotic expansion of LECs induced by 50 mM galactose; in vivo, diosgenin could markedly delay the onset of lens opacification and maturation of rat galactosemic cataract. Therefore, we suggest that plants rich in diosgenin can be regarded as part of dietary management for diabetic patients to postpone the occurrence of sugar cataract, and diosgenin should be further investigated as a potential AR inhibitor to treat life-threatening diabetic complications.
Diosgenin, a Novel Aldose Reductase Inhibitor, Attenuates the Galactosemic Cataract in Rats