[kast]
1. a positive copy of an object.
2. to make such a copy.
3. a mold of a tube or hollow organ (such as a renal tubule or bronchiole), formed of effused matter and eliminated from the body. See also urinary cast.
4. a positive copy or mold of the tissues of the jaws, made in an impression, and over which denture bases or other restorations may be fabricated.
5. strabismus.
6. a stiff dressing or casing, usually made of plaster of Paris, used to immobilize body parts.
Patient Care. If the patient is confined to bed after a plaster of Paris cast is applied, it is necessary to provide a firm mattress protected by a waterproof material. Several small pillows should be available for placing under the curves of the cast to prevent remolding or cracking of the plaster and to provide adequate support of the patient. When handling a wet cast only the palm or flat of the hand is used so that the fingertips will not make indentations that might produce pressure against the patient's skin.

While the cast is drying it is left uncovered to allow circulation of air around it. Extreme heat should not be used to hasten drying of a plaster of Paris cast, as this may produce burns under the cast. Synthetic casts, however, may be set or cured with heat. To minimize crumbling of the edges and irritation of the skin around and under the cast, a strip of stockinette or adhesive tape is applied so that the rim of the cast is thoroughly covered. Observation of the patient for signs of impaired circulation, pressure against a nerve, or compartmental syndrome is extremely important. Any numbness, recurrent pain, or tingling should be reported at once. If a limb is enclosed in a cast it should be elevated to reduce swelling. Cyanosis or blanching of the fingers or toes extending from a cast usually indicates impaired blood flow, which may lead to serious complications if not corrected immediately.
renal cast (urinary cast) a cast formed from gelled protein precipitated in the renal tubules and molded to the tubular lumen; pieces of these casts break off and are washed out with the urine. Types named for their constituent material include epithelial, granular, hyaline, and waxy casts. In renal disease, casts may be seen containing red or white blood cells.
walking cast a lower extremity cast with an attached heel or other support so that the patient is able to ambulate while the cast is in place.
Miller-Keane Encyclopedia and Dictionary of Medicine, Nursing, and Allied Health, Seventh Edition. © 2003 by Saunders, an imprint of Elsevier, Inc. All rights reserved.

(kast),
1. An object formed by the solidification of a liquid poured into a mold.
2. Rigid encasement of a part, as with plaster, plastic, or fiberglass, for purposes of immobilization.
3. An elongated or cylindric mold formed in a tubular structure (for example, renal tubule, bronchiole) that may be observed in histologic sections or in material such as urine or sputum; results from inspissation of fluid material secreted or excreted in the tubular structures.
4. Restraint of a large animal, usually a horse, with ropes and harnesses in a recumbent position.
5. In dentistry, a positive reproduction of the form of the tissues of the upper or lower jaw, which is made by the solidification of plaster, metal, or other materials, poured into an impression and over which denture bases or other dental restorations may be fabricated.
[M.E. kasten, fr. O.Norse kasta]
Farlex Partner Medical Dictionary © Farlex 2012

(kăst)
n.
1. A rigid dressing, usually made of gauze and plaster of Paris, used to immobilize an injured body part, as in a fracture or dislocation.
2. A mass of fibrous material, coagulated protein, or exudate that has taken the form of the cavity in which it has been molded, such as the bronchial, renal, or vaginal cavity, and that is found histologically and in urine or sputum samples.
The American Heritage® Medical Dictionary Copyright © 2007, 2004 by Houghton Mifflin Company. Published by Houghton Mifflin Company. All rights reserved.
A descriptor for a smooth contour of the small intestinal mucosa with loss of mucosal folds, typical of radiocontrast studies in gluten-sensitive enteropathy (coeliac disease)
Segen's Medical Dictionary. © 2012 Farlex, Inc. All rights reserved.

Medtalk A mold of formed structure or wall. See Decidual cast Nephrology A translucent proteinaceous mold of the renal tubules seen in the urine; casts are ↑↑↑ in renal disease, and the types are crude indicators of the type of renal disease; the matrix of all casts is composed of albumin, small–< 50 kD globulins and glycoprotein secreted by Henle's ascending loop and the distal tubule, forming Tamm-Horsfall protein, aka uromodulin. See Granular cast, Telescoped cast, Waxy cast Orthopedics A temporary plaster or fiberglass device used to immobilize a Fx. See SPICA cast, Walking cast.

(kast)
1. An object formed by solidification of a liquid poured into a mold.
2. Rigid encasement of a part, as with plaster, fiberglass, or plastic, to immobilize (e.g., long-leg cast, short-leg cast) a fractured bone.
3. An elongated or cylindric mold formed in a tubular structure (e.g., renal tubule, bronchiole) that may be observed in histologic sections or in material such as urine or sputum; results from inspissation of fluid material secreted or excreted in the tubular structures.
4. dentistry A positive reproduction of the form of the tissues of the upper or lower jaw, formed by pouring gypsum or metal into an impression of the tissues, allowing it to set, and then removing the impression. Resulting structure provides a base on which dental restorations may be fabricated.
[M.E. kasten, fr. O.Norse kasta]
Medical Dictionary for the Health Professions and Nursing © Farlex 2012 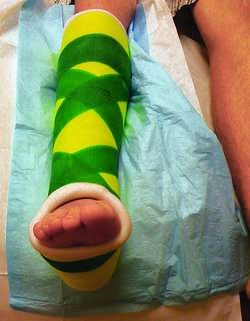 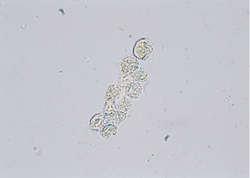 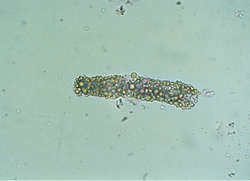 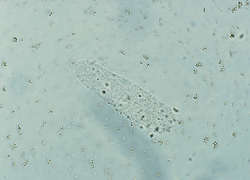 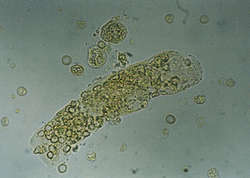 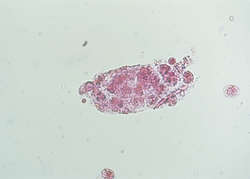 1. An abnormal moulded shape, corresponding to the inside of a kidney tubule or a small air tube in the lungs (bronchiole) formed when excreted material such as protein or mucus solidifies in situ.
2. A supportive shell of bandage-reinforced Plaster of Paris used to immobilize fractures during healing.
Collins Dictionary of Medicine © Robert M. Youngson 2004, 2005

A negative form or replica of the anterior part of the eye. A substance with rapid gelling properties is held in contact with the eye until gelled. This impression (or mould) is then used in the preparation of a positive model called a cast (or casting) of the anterior part of the eye: it is made by filling the impression with a material containing a plaster of Paris base which hardens to artificial stone. Using this cast a shell of a scleral contact lens is produced with optimum shape of the back surface. Syn. impression; impression moulding; mould; ocular impression.
Millodot: Dictionary of Optometry and Visual Science, 7th edition. © 2009 Butterworth-Heinemann

(kast)
1. In dentistry, a positive reproduction of the form of the tissues of the upper or lower jaw, which is made by the solidification of plaster, metal, or other materials, poured into an impression and over which denture bases or other dental restorations may be fabricated.
2. An object formed by the solidification of a liquid poured into a mold.
3. Rigid encasement of a part, as with plaster, plastic, or fiberglass, for purposes of immobilization.
[M.E. kasten, fr. O.Norse kasta]
Medical Dictionary for the Dental Professions © Farlex 2012