[shis´-, skis´to-sīt]
a fragment of an erythrocyte, commonly observed in the blood in hemolytic anemia; called also helmet cell and schizocyte.

(shĭs′tə-sīt′)
n.
A red blood cell having an abnormal shape as a result of fragmentation that occurs as the cell flows through damaged small vessels.

A fragmented red cell which arises from either an intrinsic increase in cell fragility or due to intravascular rugosities that traumatise cells; schistocytes are a nonspecific finding seen in hemolysis, trauma, prosthetic heart valves, megaloblastic and microangiopathic anaemioccidianhemolytic uremic syndrome, TTP.

(ker'ă-tō-sīt)
1. The fibroblastic stromal cell of the cornea.
2. A variety of poikilocyte that owes its abnormal shape to fragmentation occurring as the cell flows through damaged small vessels.
Synonym(s): schistocyte. 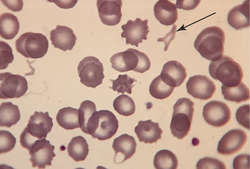 SCHISTOCYTE: In peripheral blood (×600)
A fragmented red blood cell that appears in the blood in a variety of bizarre shapes, from small triangular forms to round cells with irregular surfaces. Schistocytes are found in patients with hemolytic anemias, severe burns, and several other conditions. Synonym: schizocyte See: illustration
illustration