Blocks HIV reverse transcriptase, an enzyme necessary for HIV replication. Blockade leads to reduced viral load and increased CD4+ cell count, helping to ward off other infections when drug is given with other antiretrovirals.

➣ HIV-1 infection, given in combination with other antiretrovirals 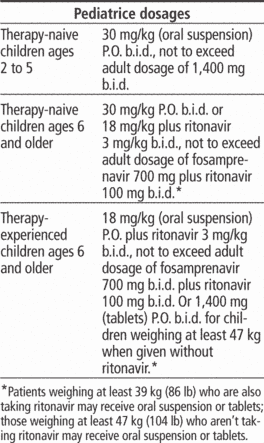 • Hypersensitivity to drug or amprenavir

• Concomitant use of drugs that depend highly on CYP3A4 for clearance and for which elevated blood levels may lead to serious or life-threatening events (such as some antiarrhythmics, antimycobacterials, ergot derivatives, GI motility agents, HMG co-reductase inhibitors, neuroleptics, nonnucleoside reverse transcriptase inhibitors, and sedative-hypnotics)

• Coadministration with ritonavir in patients receiving flecainide or propafenone

• Concomitant use of St. John's wort

• children younger than age 2 (safety and efficacy not established).

• Give oral suspension to adults without food and to children with food.

• Administer tablets with or without food.

Cisapride, pimozide: possible serious or life-threatening reactions, such as arrhythmias (concomitant use with fosamprenavir contraindicated)

Hormonal contraceptives: possible changes in hormone levels and liver enzyme elevations (if used in combination with fosamprenavir and ritonavir)

Lovastatin, simvastatin: increased risk of serious reactions such as myopathy, including rhabdomyolysis (concomitant use with fosamprenavir contraindicated)

Midazolam, triazolam: serious or life-threatening reactions, such as prolonged or increased sedation or respiratory depression (concomitant use with fosamprenavir contraindicated)

PDE5 inhibitors (such as sildenafil): increased risk of adverse reactions (such as hypotension, visual changes, priapism)

• Be aware that immune reconstitution syndrome has occurred in patients treated with combination antiretroviral therapy. During initial phase of such therapy, patients whose immune system responds may develop inflammatory response to indolent or residual opportunistic infections (such as Mycobacterium avium complex, cytomegalovirus, Pneumocystis jiroveci pneumonia, and tuberculosis), which may necessitate further evaluation and treatment.

• Tell caregivers to give oral suspension with food to child.

• Instruct patient to shake oral suspension bottle vigorously before each use; mention that refrigeration may improve taste.

• Instruct patient to take tablets with or without food.

• Tell patient that drug may cause body fat redistribution or accumulation and that the cause and long-term health effects of this condition aren't known.

• Advise patient that drug may interact with many drugs and herbs (especially St. John's wort). Caution patient to discuss use of herbs and other drugs with prescriber.

• Advise male receiving PDE5 inhibitors (such as sildenafil, tadalafil, vardenafil) that he may be at increased risk for adverse events, including hypotension, visual changes, and priapism. Instruct him to promptly report symptoms.

• Advise patient taking hormonal contraceptives to use alternative contraception during therapy because hormone levels may be altered and liver enzyme levels may increase.

• Advise female to notify prescriber if she is pregnant or intends to become pregnant.

• Instruct women not to breastfeed while taking drug.

• As appropriate, review all other significant and life-threatening adverse reactions and interactions, especially those related to the drugs, tests, food, and herbs mentioned above.