[floor´o-skōp″]
an instrument for visual observation of the body by means of x-ray. The patient is put into position so that the part to be viewed is placed between an x-ray tube and a fluorescent screen. X-rays from the tube pass through the body and project the bones and organs as images on the screen. Examination by this method is called fluoroscopy.

The advantage of the fluoroscope is that the action of joints, organs, and entire systems of the body can be observed directly. The use of radiopaque media and radiolucent agents aids in this process. 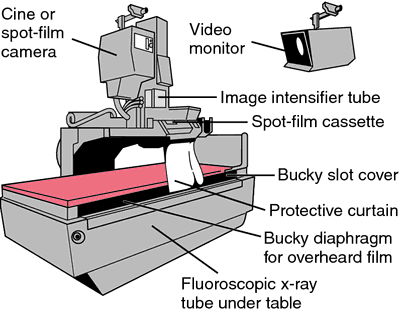 Fluoroscope and associated parts. From Bushong, 2001.

(flōr'ō-skōp),
1. An obsolete apparatus for rendering visible to the dark-adapted eye the patterns of x-rays that have passed through a body under examination, by interposing a glass plate coated with fluorescent materials, such as calcium tungstate; currently, image intensification and video display are used.
2. To examine a patient using a fluoroscope, obsolete or modern.
[fluorescence + G. skopeō, to examine]

(flo͝or′ə-skōp′, flôr′-)
n.
A device equipped with a fluorescent screen on which the internal structures of an optically opaque object, such as the human body, may be continuously viewed as shadowy images formed by the differential transmission of x-rays through the object. Also called roentgenoscope.
tr.v. fluoro·scoped, fluoro·scoping, fluoro·scopes
To examine the interior of (an object) with a fluoroscope.
fluor′o·scop′ic (-skŏp′ĭk) adj.
fluor′o·scop′i·cal·ly adv.

(flōr'ō-skōp)
An apparatus for rendering visible the patterns of x-rays that have passed through a body under examination, by interposing a glass plate coated with fluorescent materials, such as calcium tungstate; to examine a patient by fluoroscopy.
[fluorescence + G. skopeō, to examine]

An X-ray viewing fluorescent screen allowing continuous viewing of internal structure of the body in conditions of low illumination. Fluoroscopy has been largely replaced by IMAGE INTENSIFIER methods.

A device used in some radiology procedures that provides immediate images and motion on a screen much like those seen at airport baggage security stations.
Mentioned in: Arthrography, Catheter Ablation, Percutaneous Transhepatic Cholangiography

(flōr'ō-skōp)
An apparatus for rendering visible the patterns of x-rays that have passed through a body under examination, by interposing a glass plate coated with fluorescent materials to examine a patient by fluoroscopy.
[fluorescence + G. skopeō, to examine]

Feedback
Flashcards & Bookmarks ?
Please log in or register to use Flashcards and Bookmarks. You can also log in with
Flashcards ?
My bookmarks ?
+ Add current page to bookmarks
TheFreeDictionary presents:
Write what you mean clearly and correctly.
Mentioned in ?
References in periodicals archive ?
(22) Another method of maximizing distance from the x-ray source is through proper positioning of the fluoroscope. By positioning the smaller x-ray source above the patient and the larger image intensifier below, there is a larger field for easier positioning of the extremity and reduced need for repeat images.
Radiation Exposure Safety Patterns with the Use of Intraoperative Fluoroscopy
The aim of this study was to compare the efficacy of performing PVP using one or two C-arm fluoroscopes.
Between September 2009 and April 2012, one hundred forty three consecutive patients (102 female and 41 male, mean ages: 74.0 years, range 52, 91) with single vertebrae who underwent PVP under the guidance of two C-arm fluoroscopes by one surgeon were included in the study after Institutional Review Board approval.
While one of the two fluoroscopes was being used for other surgeries, only single fluoroscope could be available for PVP.
For Group 2, the two C-arm fluoroscopes were placed on the same side.
The average number of pulsed imagings was 16.00+-1.58 vs 13.07+-2.00 per patient under the guidance of one vs two C-arm fluoroscopes. The average time of operation was 48.42+-5.00 minutes vs 39.70+-7.42 minutes per patient under the guidance of one vs two C-arm fluoroscopes.
A method of percutaneous vertebroplasty under the guidance of two C-arm fluoroscopes
Edison created the fluoroscope, consisting of a zinc-cadmium sulfide screen that was placed above the patient's body in the x-ray beam.
Operators can achieve some reduction in skin dose by periodically rotating the fluoroscope around a center within the anatomy of interest.
Optimization of a fluoroscope to reduce radiation exposure in pediatric imaging.
Radiation safety in fluoroscopy. (Directed Reading)