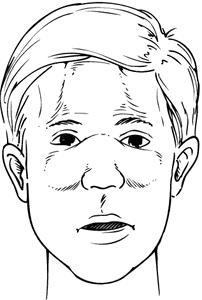 a disturbance of medullary bone maintenance in which bone undergoing physiologic lysis is replaced by abnormal proliferation of fibrous tissue, resulting in asymmetric distortion and expansion of bone; may be confined to a single bone (monostotic fibrous dysplasia) or involve multiple bones (polyostotic fibrous dysplasia).
Farlex Partner Medical Dictionary © Farlex 2012

(fī'brŭs dis-plā'zē-ă bōn)
A disturbance in which bone undergoing physiologic lysis is replaced by abnormal fibrous tissue, resulting in asymmetric distortion and expansion of bone; may be confined to a single bone (monostotic fibrous dysplasia) or involve multiple bones (polyostotic fibrous dysplasia).
Medical Dictionary for the Health Professions and Nursing © Farlex 2012