[zi´gōt]
the cell resulting from union of a male and a female gamete; the fertilized ovum (see also reproduction). More precisely, the cell after synapsis at the completion of fertilization until first cleavage. adj., adj zygot´ic. 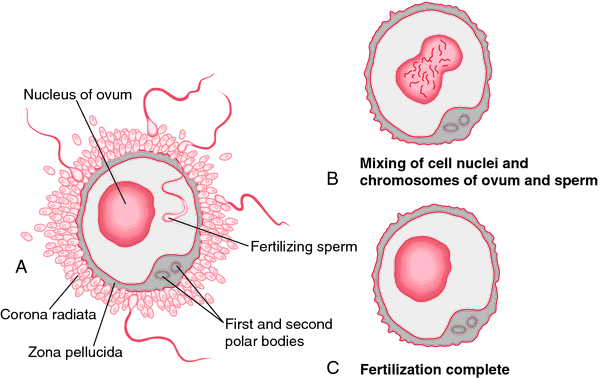 Development of the zygote. A, A sperm enters the ovum. B, The 23 chromosomes from the sperm mingle with the 23 chromosomes from the ovum, restoring the diploid number to 46. C, The fertilized ovum, now called a zygote, is ready for the first mitotic cell division. From McKinney et al., 2000.
Miller-Keane Encyclopedia and Dictionary of Medicine, Nursing, and Allied Health, Seventh Edition. © 2003 by Saunders, an imprint of Elsevier, Inc. All rights reserved.

(zī'gōt),
1. The diploid cell resulting from union of a sperm and a secondary oocyte. Compare: conceptus.
2. The early embryo that develops from a fertilized oocyte.
[G. zygōtos, yoked]
Farlex Partner Medical Dictionary © Farlex 2012

(zī'gōt)
1. The diploid cell resulting from union of a sperm and an oocyte.
Compare: conceptus
2. The early embryo that develops from a fertilized oocyte.
[G. zygōtos, yoked]
Medical Dictionary for the Health Professions and Nursing © Farlex 2012

An egg (ovum) that has been fertilized but has not yet undergone the first cleavage division. A zygote contains a complete (DIPLOID) set of chromosomes, half from ovum and half from the fertilizing sperm, and thus all the genetic code for a new individual.
Collins Dictionary of Medicine © Robert M. Youngson 2004, 2005

the DIPLOID (1) cell produced by the fusion of the nuclei of male and female gamete nuclei at FERTILIZATION.
Collins Dictionary of Biology, 3rd ed. © W. G. Hale, V. A. Saunders, J. P. Margham 2005

The result of the sperm successfully fertilizing the ovum. The zygote is a single cell that contains the genetic material of both the mother and the father.
Mentioned in: Ectopic Pregnancy, Infertility, Infertility Therapies, Turner Syndrome
Gale Encyclopedia of Medicine. Copyright 2008 The Gale Group, Inc. All rights reserved.

(zī'gōt)
1. Diploid cell resulting from union of a sperm and a secondary oocyte.
2. Early embryo that develops from a fertilized oocyte.
[G. zygōtos, yoked]
Medical Dictionary for the Dental Professions © Farlex 2012

Feedback
Flashcards & Bookmarks ?
Please log in or register to use Flashcards and Bookmarks. You can also log in with
Flashcards ?
My bookmarks ?
+ Add current page to bookmarks
Mentioned in ?
References in periodicals archive ?
Rather, pregnancy is defined by the implantation of a fertilized egg in the wall of the uterus.
The politics of personhood
Would declaring fertilized eggs persons have effects on programs such as welfare payments based on number of children?
LETTERS IN THE EDITOR'S MAILBAG
However, there has been no discussion about the flattening process in fertilized eggs and twin embryo appearance.
Twin Xenopus laevis embryos appearing from flattened eggs
Is there only one road for the fertilized egg to travel?
Is an embryo a person?
Unless and until the fertilized egg implants into the triggering and life-supporting environment of a human uterus (approximately five to seven days after fertilization) or a yet-to-be-developed mechanical womb, it cannot go beyond the blastocyst stage.
An embryo by any other name? The battle over stem cell research begins with language
The DNA content of a skin cell, a stem cell, and a fertilized egg are exactly the same.
Blastocyst Brouhaha
Successful reproduction is a complicated process that depends upon many factors, including production of healthy sperm by the man and healthy eggs by the woman; normally functioning fallopian tubes that allow the sperm to reach the egg; the sperm's ability to penetrate and fertilize the egg; implantation of the fertilized egg (embryo) in the woman's uterus; and a proper hormonal balance to maintain the pregnancy to full term.
Multiple Births Not Necessarily a Consequence of CONCEPTION DRUGS
This light scattering assay did not, however, rule out the possibility that fragmentation was also occurring in the fertilized egg, but was unnoticed, perhaps because the envelope trapped the fragments.
A little shell to live in: evidence that the fertilization envelope can prevent mechanically induced damage of the developing sea urchin embryo
Some religious conservatives and abortion opponents claim that in isolated instances, Plan B can prevent an already fertilized egg from implanting in the uterus, thereby "aborting" a conceived human being.
Plan B backlash
New research provides the best evidence yet that a fertilized egg's nucleus isn't the sole site of control for an embryo's development.
Cytoplasm affects embryonic development
Kato said he has already applied the technique to 11 couples and has been successful in nurturing five fertilized eggs to blastocyst -- the stage immediately before the fertilized egg's implantation -- from four couples.
CORRECTED: Donor sperm used in new in vitro procedure
It is now possible after a fertilized egg has first divided into two cells to take one cell and use it to test for genetic diseases.
Petri Dish Politics