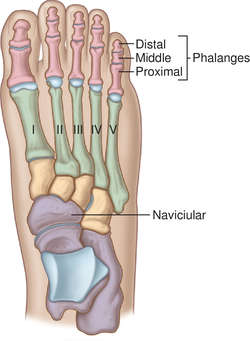 BONES OF FOOT AND ANKLE: Left foot, lateral view
The terminal part of the leg below the ankle. The bones of the foot include the tarsals, metatarsals, and phalanges. See: illustration; leg for illus.; skeleton 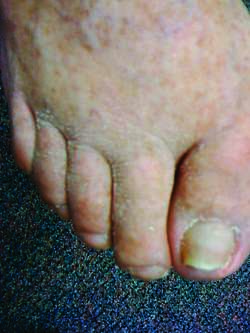 A scaling, cracked, or macerated rash, typically found between the toes and usually caused by a fungal skin infection (such as tinea) although bacteria may also be involved. The rash is usually mildly itchy. Synonym: dermatophytosis; tinea pedisillustration;

The feet, esp. the webbing between the toes, should be carefully dried after bathing. Well-ventilated shoes and absorbent socks should be worn. Topically applied antifungal drugs, such as terbinafine, effectively treat the condition except when maceration is prominent and bacterial infection is also present. In these instances, oral antibiotics are needed.

A condition in which a cleft extends between the digits to the metatarsal region, usually due to a missing digit and metatarsal.
Synonym: split foot

A condition of the feet, resulting from prolonged immersion in cold water, in which pain and inflammation are followed by swelling, discoloration, and numbness.
Synonym: tropical immersion foot

An insidious fracture of one of the metatarsal bones of the foot.
See: march fracture

Non-filarial lymphatic obstruction of the legs, commonly found in volcanic regions of Africa, where it occurs primarily in those who walk barefoot on alkaline, mineral-rich soil.
Synonym: podoconiosis

An artificial foot designed to absorb the impact of foot-to-floor contact with a dynamic elastic structure.

Degeneration of the skin of the feet due to prolonged exposure to moisture. The condition, which resembles frostbite, may be prevented by ensuring that clean, dry socks are worn at all times. The feet do not have to be exposed to cold to develop this condition.

Solid ankle cushion heel foot; a prosthetic foot that has no definite ankle joint but is designed to absorb shock and allow movement of the shank over the foot during ambulation.

A. Pes planus (flat foot) is not a rare condition in toddlers, and may resolves spontaneously as the child grows. It is diagnosed clinically, i.e. by a doctor such as pediatrician or pediatric orthopedic surgeon, and radiographs are not universally indicated

Feedback
Flashcards & Bookmarks ?
Please log in or register to use Flashcards and Bookmarks. You can also log in with
Flashcards ?
My bookmarks ?
+ Add current page to bookmarks
TheFreeDictionary presents:
Write what you mean clearly and correctly.
Mentioned in ?
References in classic literature ?
These bars were set one above another about three feet apart, and formed a perfect ladder as far above me as I could see.
For fully five hundred feet I continued to climb, until at length I reached the opening in the stem which admitted the light.
Tars Tarkas went in advance and as I reached the first of the horizontal bars I drew the ladder up after me and, handing it to him, he carried it a hundred feet further aloft, where he wedged it safely between one of the bars and the side of the shaft.
View in context
"My knapsack brought my head down first, and I pitched into some rocks about a dozen feet below; they caught something, and tumbled me off the edge, head over heels, into the gully; the baton was dashed from my hands, and I whirled downward in a series of bounds, each longer than the last; now over ice, now into rocks, striking my head four or five times, each time with increased force.
The sun was setting when consciousness returned, and it was pitch-dark before the Great Staircase was descended; but by a combination of luck and care, the whole four thousand seven hundred feet of descent to Breil was accomplished without a slip, or once missing the way."
View in context
This is as clear as summer lightning," Mowgli answered; and they fell into the quick, choppy trail-trot in and out through the checkers of the moonlight, following the marks of those two bare feet.
Now I hide me behind a rock and stand still," not daring to shift my feet. Cry thy trail, Little Brother."
View in context
The man himself, for such I may call him, was fully fifteen feet in height and, on Earth, would have weighed some four hundred pounds.
It towered ten feet at the shoulder; had four legs on either side; a broad flat tail, larger at the tip than at the root, and which it held straight out behind while running; a gaping mouth which split its head from its snout to its long, massive neck.
View in context
Remember that I am not speaking of an oblong, but of a figure equal every way, and twice the size of this--that is to say of eight feet; and I want to know whether you still say that a double square comes from double line?
SOCRATES: And four such lines will make a space containing eight feet?
View in context
"Precisely, Ned: so that at 32 feet beneath the surface of the sea you would undergo a pressure of 97,500 lb.; at 320 feet, ten times that pressure; at 3,200 feet, a hundred times that pressure; lastly, at 32,000 feet, a thousand times that pressure would be 97,500,000 lb.--that is to say, that you would be flattened as if you had been drawn from the plates of a hydraulic machine!"
View in context