Factor I | definition of factor I by Medical dictionary
https://medical-dictionary.thefreedictionary.com/factor+I
Printer Friendly 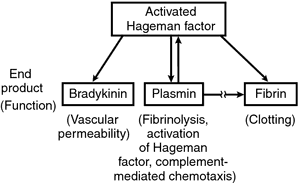 1. in the clotting of blood a factor that is converted to fibrin through the action of thrombin.
See also: fibrinogen.
2. a regulatory factor for the alternate complement pathway.
Farlex Partner Medical Dictionary © Farlex 2012

(fak'tŏr)
In the clotting of blood, a factor that is converted to fibrin through the action of thrombin.
See also: fibrinogen
Medical Dictionary for the Health Professions and Nursing © Farlex 2012

(fak'tŏr)
In blood clotting, a factor converted to fibrin through thrombin action.
Medical Dictionary for the Dental Professions © Farlex 2012

Patient discussion about factor I

A. Primary risk factors include:

A. Are you fitness professional? I understand that you are very much interested in food guidelines. It can be difficult to keep up with the latest guidelines and standards. This is particularly true this year, which has seen new USDA Food Guidelines in January, a revised Food Pyramid in May and, most recently, the release of the 7th edition of ACSM’s Guidelines for Exercise Testing and Prescription. The good news is that the ACSM risk factors have been minimally revised. For your reference, here is a summary of what has and has not changed for the 2006 edition.

Q. Is obesity a risk factor for Dementia?

A. The answer is YES. In fact, many of the risk factors for heart disease, such as high blood pressure, blood glucose levels, insulin resistance, and overweight, are also risk factors for dementia, in addition to genetic predisposition for the disease.
More discussions about factor I
This content is provided by iMedix and is subject to iMedix Terms. The Questions and Answers are not endorsed or recommended and are made available by patients, not doctors.