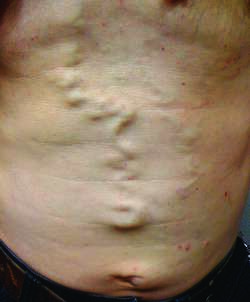 Feedback
Flashcards & Bookmarks ?
Please log in or register to use Flashcards and Bookmarks. You can also log in with
Flashcards ?
My bookmarks ?
+ Add current page to bookmarks
Mentioned in ?
References in periodicals archive ?
In our study, we found that area under the ROC curve for PC/SD ratio was approximately 0.9 (0.88) indicating that this variable can be used as a simple noninvasive tool for determining the presence of esophageal varix. Many studies have proposed that the PC/SD ratio >909 has high reliability in predicting esophageal varices (3,14,19).
Noninvasive parameters can be used as a screening tool for identifying esophageal varix. Platelets to splenic diameter ratio is the most reliable marker for scrutinizing the patients who are at increased risk of developing esophageal varix.
Platelet count to splenic diameter ratio and other noninvasive markers as predictors of esophageal varices in patients with liver cirrhosis