[es-kuch´un]
1. a shield or something shaped like a shield.
2. the shieldlike pattern of distribution of the pubic hair. 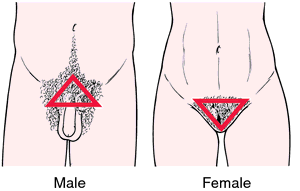 (es-kŭtch'ŏn),
Pattern of distribution of pubic hair.
[M.E., fr. Norman Fr. esochon, fr. L.L., scutio, fr. L. scutum, shield]
Farlex Partner Medical Dictionary © Farlex 2012
A patch of pubic hair
The normal female escutcheon is a triangle pointing downward, sharply cut off at the level of the pubic symphysis; the male escutcheon is diamond-shaped with both downward and upward angles; a male pattern in a woman may indicate pathological excess of androgen, or be a familial trait without significance
Segen's Medical Dictionary. © 2012 Farlex, Inc. All rights reserved.

Feedback
Flashcards & Bookmarks ?
Please log in or register to use Flashcards and Bookmarks. You can also log in with
Flashcards ?
My bookmarks ?
+ Add current page to bookmarks
Mentioned in ?
References in periodicals archive ?
You probably remember the handle escutcheon shrinking tightly up to the handle and turning with the handle, thereby tearing the trim.
Plastic materials in automotive construction
If it expands too much and you can't get the escutcheon back on, wait for it to dry, then slice it flush with the wall with a utility knife.
Stop throwing cash out the window: seal air leaks and cut energy bills: if you combined all of the air leaks in a typical house--up the chimney, out the dryer vent, under the front door--it would be the equivalent of leaving a window open all day long!
Lindquist describes how painters to the Dukes of Burgundy were often rewarded as much, or more, for personal loyalty to the duke than for their artistic skills, and became closest and most useful members of the court through their management roles in large collaborative projects, including such "low arts" as design for pennants, banners, harnesses, and escutcheons, a position also noted by Elsig for artists in Savoy (61).
Artists at Court: Image-Making and Identity, 1300-1550
Instead, Gwiz custom-ordered brass escutcheons to cover the window frame, making it much more pleasing to the eye.
Window to the underworld: designing and building with underwater windows
If you're building your own home, one advantage would be to know your architraves from your escutcheons. Luckily, there are those who allow their enthusiasm only so much rein before letting the real professionals take over and do what they do best ( in the knowlege that partnerships are based on trust, experience and all-round vision.
Living the dream
In the end, as Amstrong records, 'no further action was taken, and the escutcheons, unobtrusive and unnoticed, remain as interesting little mementos of the first Governors of the Institution.' (10) It can be reported that today, the armorial bearings continue to remain safely out of harm's way, and still largely unnoticed.
'Thrusting forward': a note on the armorial bearings
The costumes suggested the fifteenth century with heraldic-looking escutcheons on the armor and flags with fleurs-de-lis and dragons hanging in the king's bedroom.
Henry IV, Parts 1 and 2
William Lawlor, the local painter/decorator, was perhaps already at work on the eight funeral escutcheons to be attached to the pall, and on a hatchment for John Parr.
"Far beyond my expectations": John Parr, Governor of Nova Scotia
There were to be four escutcheons at the corners of the stone:
Heraldry and the medieval gentlewoman: Maurice Keen looks at the significance of female lines of descent in heraldic arms, and what this tells us about women of noble and gentle birth in medieval England
These locks combine innovatively designed escutcheons with a variety of configurations to activate the lock.
Standalone access control. (ISC West Product Showcase)
This lavatory unit has a square-angled gooseneck spout and comes with cross or lever handles on cylindrical bonnets and curved escutcheons. Five finishes are available.
Bath fixtures and faucets. (Spec Book)
The first labels came into use circa 1735 and were like escutcheons or cartouches in shape, being made from a series of symmetrical scrolls, slightly shaped to hang comfortably against the bottle.
Antiques & Auctions: Silver labels just the ticket for collectors; COLLECTIBLES: Many 18th Century pieces carry the names of vines that have long been forgotten