[e-pif´ĭ-sis] (pl. epi´physes) (Gr.)
1. the end of a long bone, usually wider than the shaft, and either entirely cartilaginous or separated from the shaft by a cartilaginous disk.
2. part of a bone formed from a secondary center of ossification, commonly found at the ends of long bones, on the margins of flat bones, and at tubercles and processes; during the period of longitudinal growth, epiphyses are separated from the main portion of the bone by cartilage. adj., adj epiphys´eal. 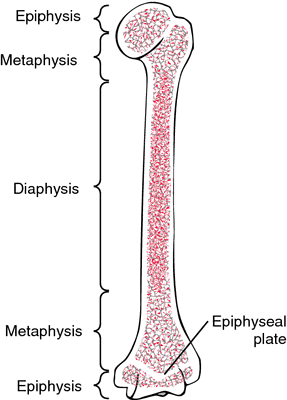 Structure and composition of a typical long bone showing the epiphysis. From Copstead, 1995.
epiphysis ce´rebri pineal body.
Miller-Keane Encyclopedia and Dictionary of Medicine, Nursing, and Allied Health, Seventh Edition. © 2003 by Saunders, an imprint of Elsevier, Inc. All rights reserved.

[TA]
a small, unpaired, flattened body, shaped somewhat like a pinecone, attached at its anterior pole to the region of the posterior and habenular commissures and lying in the depression between the two superior colliculi below the splenium of the corpus callosum; it is a glandular structure, composed of follicles containing epithelioid cells and lime concretions called brain sand; despite its attachment to the brain, it appears to receive nerve fibers exclusively from the peripheral autonomic nervous system. It produces melatonin and serotonin.
Synonym(s): corpus pineale [TA], glandula pinealis [TA], pineal gland [TA], conarium, epiphysis cerebri, pinus
Farlex Partner Medical Dictionary © Farlex 2012