[er″ĭ-the´mah]
redness of the skin caused by congestion of the capillaries in the lower layers of the skin. It occurs with any skin injury, infection, or inflammation.
erythema chro´nicum mi´grans a ring-shaped erythema due to the bite of a tick of the genus Ixodes; it begins as an erythematous plaque several weeks after the bite and spreads peripherally with central clearing. Often there are also systemic symptoms, including chills, fever, headache, vomiting, backache, and stiff neck. See also lyme disease.
gyrate erythema (erythema gyra´tum) erythema multiforme characterized by the development of lesions that tend to migrate and spread peripherally with central clearing.
erythema ab ig´ne permanent erythema produced by prolonged exposure to excessive nonburning heat. It is seen most often on the legs of women, but under appropriate environmental circumstances, it can occur anywhere on the body in either sex.
erythema indura´tum a chronic necrotizing vasculitis, usually occurring on the calves of young women; see also bazin's disease.
erythema infectio´sum a mild, self-limiting disease of childhood characterized by a lacelike skin rash symmetrically distributed on the hands, arms, and legs, with few or no other symptoms; occasionally there is a low grade fever, and the condition often clears up without specific treatment. The incubation period is six days to two weeks. This disease is contagious and originally was believed to be a form of rubella; because the rash can resemble that of scarlet fever and German measles, it is important to differentiate this mild condition from those more serious ones. Called also fifth disease.
erythema margina´tum a type of erythema multiforme in which the reddened areas are disk-shaped, with elevated edges.
erythema margina´tum rheuma´ticum a superficial, often asymptomatic, form of gyrate erythema associated with some cases of rheumatic fever, which is characterized by the presence on the trunk and extensor surfaces of the extremities of a transient eruption of flat to slightly indurated, nonscaling, and usually multiple lesions.
erythema mi´grans geographic tongue.
erythema multifor´me a symptom complex representing a reaction of the skin and mucous membranes secondary to various known, suspected, and unknown factors, including infections, ingestants, physical agents, malignancy, and pregnancy. The conditions in the complex are characterized by the sudden onset of a reddened macular, bullous, papular, or vesicular eruption, the characteristic lesion being the iris, bull's eye, or target lesion, which consists of a central papule with two or more concentric rings. The complex includes a mild self-limited mucocutaneous form (erythema multiforme minor) and a severe, sometimes fatal, multisystem form (stevens-johnson syndrome).
erythema nodo´sum a type of panniculitis occurring usually as a hypersensitivity reaction to multiple provoking agents, including various infections, drugs, sarcoidosis, and certain enteropathies. It may also be of idiopathic origin. It most often affects young women and is characterized by the development of crops of transient, inflammatory, nonulcerating nodules that are usually tender, multiple, and bilateral, and most commonly located on the shins; the lesions involute slowly, leaving bruiselike patches without scarring. The acute disease is often associated with fever, malaise, and arthralgias. A chronic variant sometimes occurs without any serious associated systemic disease.
toxic erythema (erythema tox´icum) a generalized erythematous or erythematomacular eruption due to administration of a drug or to bacterial or other toxins or associated with various systemic diseases.
erythema tox´icum neonato´rum a benign, idiopathic, very common, generalized, transient eruption occurring in infants during the first week of life, usually consisting of small papules or pustules that become sterile, yellow-white, firm vesicles surrounded by an erythematous halo and some edema.
Miller-Keane Encyclopedia and Dictionary of Medicine, Nursing, and Allied Health, Seventh Edition. © 2003 by Saunders, an imprint of Elsevier, Inc. All rights reserved.

A general term for reddening, especially of a mucocutaneous surface, rash
McGraw-Hill Concise Dictionary of Modern Medicine. © 2002 by The McGraw-Hill Companies, Inc.

(er'i-thē'mă)
Redness of the skin due to capillary dilatation.
[G. erythēma, flush]
Medical Dictionary for the Health Professions and Nursing © Farlex 2012 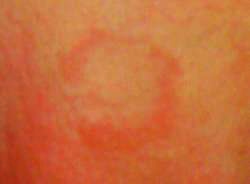 Redness of the skin from widening (dilatation) of the small skin blood vessels. This may result from one of a very large number of causes such as blushing, ROSACEA, ECTASIA of blood vessels, INFLAMMATION and rashes (exanthemata).
Collins Dictionary of Medicine © Robert M. Youngson 2004, 2005

The medical term for redness of the skin produced by congestion of the capillaries in the skin.
Mentioned in: Rosacea, Ultraviolet Light Treatment
Gale Encyclopedia of Medicine. Copyright 2008 The Gale Group, Inc. All rights reserved.