[sel″u-li´tis]
a diffuse inflammatory process within solid tissues, characterized by edema, redness, pain, and interference with function; it may be caused by infection with streptococci, staphylococci, or other organisms. It usually occurs in the loose tissues beneath the skin, but may also occur in tissues beneath mucous membranes or around muscle bundles or surrounding organs.

Erysipelas, a surface cellulitis of the skin, is characterized by patches of skin that are red, have sharply defined borders, and feel hot to the touch. Other types of skin cellulitis are also characterized by hot red patches, but the borders are less clearly defined. Red streaks extending from the patch indicate that lymph vessels have been infected.

Facial cellulitis is a type involving the face, especially the cheek or periorbital or orbital tissues, although other regions such as the neck may be affected. ludwig's angina is a cellulitis of the tissues of the floor of the mouth and neck, in the area around the submaxillary gland. Orbital cellulitis is an acute inflammation of the eye socket. 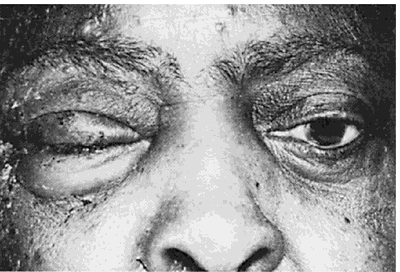 Orbital cellulitis. From McQuillan et al., 2002.
Pelvic cellulitis involves the tissues surrounding the uterus and is better known as parametritis.

Cellulitis is potentially dangerous but usually can be treated successfully with antimicrobials. Any cellulitis on the face must be given special attention because the infection may extend directly to the cavernous sinuses of the brain.
eosinophilic cellulitis wells syndrome.
Miller-Keane Encyclopedia and Dictionary of Medicine, Nursing, and Allied Health, Seventh Edition. © 2003 by Saunders, an imprint of Elsevier, Inc. All rights reserved.

Feedback
Flashcards & Bookmarks ?
Please log in or register to use Flashcards and Bookmarks. You can also log in with
Flashcards ?
My bookmarks ?
+ Add current page to bookmarks
Mentioned in ?
References in periodicals archive ?
Eosinophilic cellulitis - A case study and management with griseofulvin.
Wells syndrome in a diabetic patient