Endoscopic retrograde cholangiopancreatography (ERCP) is a technique in which a hollow tube called an endoscope is passed through the mouth and stomach to the duodenum (the first part of the small intestine). This procedure was developed to examine abnormalities of the bile ducts, pancreas, and gallbladder. It was developed during the late 1960s and is used today to diagnose and treat blockages of the bile and pancreatic ducts.
The term has three parts to its definition:

Until the 1970s, methods to visualize the bile ducts produced images that were of relatively poor quality and often misleading; in addition, the pancreatic duct could not be examined at all. Patients with symptoms related to the bile ducts or pancreatic ducts frequently needed surgery to diagnose and treat their conditions.
Using ERCP, physicians can obtain high-quality x rays of these structures and identify areas of narrowing (strictures), cancers, and gallstones. This procedure can help determine whether bile or pancreatic ducts are blocked; it also identifies where they are blocked along with the cause of the blockage. ERCP may then be used to relieve the blockage. For patients requiring surgery or additional procedures for treatment, ERCP outlines the anatomical changes for the surgeon.

The most important precaution is that the examination should be performed by an experienced physician. The procedure is much more technically difficult than many other gastrointestinal endoscopic studies. Patients should seek physicians with experience performing ERCP. Patients should inform the physician about any allergies (including allergies to contrast dyes, iodine, or shellfish), medication use, and medical problems. Occasionally, patients may need to be admitted to the hospital after the procedure.

After sedation, a specially adapted endoscope is passed through the mouth, through the stomach, then into the duodenum. The opening to ducts that empty from the liver and pancreas is identified, and a plastic tube or catheter is placed into the orifice (opening). Contrast dye is then injected into the ducts, and with the assistance of a radiologist, pictures are taken.

Someone should be available to take the person home after the procedure and stay with them for a while; patients will not be able to drive themselves because they undergo sedation during this test. Pain or any other unusual symptoms should be reported to the physician.

ERCP-related complications can be broken down into those related to medications used during the procedure, the diagnostic part of the procedure, and those related to endoscopic therapy. The overall complication rate is 5-10%; most of those occur when diagnostic ERCP is combined with a therapeutic procedure. During the exam, the endoscopist can cut or stretch structures (such as the muscle leading to the bile duct) to treat the cause of the patient's symptoms. Although the use of sedatives carries a risk of decreasing cardiac and respiratory function, it is very difficult to perform these procedures without these drugs.

Endoscope, endoscopy — An endoscope used in the field of gastroenterology is a hollow, thin, flexible tube that uses a lens or miniature camera to view various areas of the gastrointestinal tract. When the procedure is performed to examine the bile ducts or pancreas, the organs are not viewed directly, but rather indirectly through the injection of contrast. The performance of an exam using an endoscope is referred to as endoscopy. Diagnosis through biopsies or other means and therapeutic procedures can also be done using these instruments.
Visualization — The process of making an internal organ visible. A radiopaque substance is introduced into the body, then an x-ray picture of the desired area is taken.
The major complications related to diagnostic ERCP are pancreatitis (inflammation of the pancreas) and cholangitis (inflammation of the bile ducts). Bacteremia (the passage of bacteria into the blood stream) and perforation (hole in the intestinal tract) are additional risks.

Because certain standards have been set for the normal diameter or width of the pancreatic duct and bile ducts, measurements using x rays are taken to determine if the ducts are too large (dilated) or too narrow (strictured). The ducts and gallbladder should be free of stones or tumors.

When areas in the pancreatic or bile ducts (including those in the liver) are too wide or too narrow compared with the standard, the test is considered abnormal. Once these findings are demonstrated using ERCP, symptoms are usually present; they generally do not change without treatment. Stones, identified as opaque or solid structures within the ducts, are also considered abnormal. Masses or tumors may also be seen, but sometimes the diagnosis is made not by direct visualization of the tumor, but by indirect signs, such as a single narrowing of one of the ducts. Overall, ERCP has an excellent record in diagnosing these abnormalities.

[ko-lan″je-o-pan″kre-ah-tog´rah-fe]
radiographic examination of the bile ducts and pancreas after administration of a contrast medium. 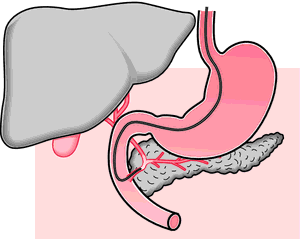 Endoscopic retrograde cholangiopancreatography. At the level of the duodenum, the papilla is located and the cannula is inserted through it. Once the cannula is in the ampulla of Vater, it is passed into the common bile duct. Once that phase of the examination is completed, the cannula is passed into the pancreatic duct. From Malarkey and McMorrow, 2000.
endoscopic retrograde cholangiopancreatography (ERCP) a procedure consisting of a combination of retrograde cholangiography and transhepatic cholangiography. The endoscope is advanced into the duodenum, the biliary tract is cannulated, and contrast medium is injected in order to demonstrate all portions of the biliary tree. See also gallbladder.
Miller-Keane Encyclopedia and Dictionary of Medicine, Nursing, and Allied Health, Seventh Edition. © 2003 by Saunders, an imprint of Elsevier, Inc. All rights reserved.

a method of cholangiopancreatography using an endoscope to inspect and cannulate the ampulla of Vater, with injection of contrast medium for radiographic examination of the pancreatic, hepatic, and common bile ducts.
Farlex Partner Medical Dictionary © Farlex 2012

Pancreatic ductography Imaging A diagnostic procedure in which an endoscope is snaked to the duodenum, then inserted through the ampulla of Vater with injection of radiocontrast to examine the extrahepatic biliary tract and pancreatic duct system–pancreatic duct, hepatic duct, common bile duct, duodenal papilla, gallbladder; ERCP can be used to remove bile duct stones and obstructions Indications Suspected pancreatic CA–PC, in particular of the periampullary region and chronic pancreatitis Findings In PC, the duct of Wirsprung is often stenosed or occluded; visualization success rate ranges to ±85%. See Rat tail tapering. Cf Percutaneous transhepatic cholangiography.
McGraw-Hill Concise Dictionary of Modern Medicine. © 2002 by The McGraw-Hill Companies, Inc.

(ERCP) (en'dŏ-skop'ik ret'rō-grād kō-lan'jē-ō-pan'krē-ă-tog'ră-fē)
A method of cholangiopancreatography using an endoscope to inspect and cannulate the ampulla of Vater, with injection of contrast medium for radiographic examination of the pancreatic, hepatic, and common bile ducts.
Medical Dictionary for the Health Professions and Nursing © Farlex 2012

A method of X-ray examination of the bile and pancreatic ducts. Using steerable fibreoptic endoscopy, a fine CATHETER is introduced into the common opening, in the duodenum, of the two duct systems and a radio-opaque dye injected. X rays are then taken. The method is valuable in the diagnosis of GALLSTONES, bile duct disorders, PANCREATITIS and cancer of the pancreas.
Collins Dictionary of Medicine © Robert M. Youngson 2004, 2005