A, Light is deviated by the prism toward its base. B, The observer views an object through the prism and the object appears displaced toward its apex. From Stein et al., 2000.
Miller-Keane Encyclopedia and Dictionary of Medicine, Nursing, and Allied Health, Seventh Edition. © 2003 by Saunders, an imprint of Elsevier, Inc. All rights reserved.

(prizm),
A transparent solid with sides that converge at an angle, which deflects a ray of light toward the thickest portion (the base) and splits white light into its component colors; in spectacles, a prism corrects ocular muscle imbalance.
[G. prisma]
Farlex Partner Medical Dictionary © Farlex 2012

Cardiology A clinical trial–Platelet Receptor Inhibition in Ischemic Syndrome Management which compared the composite end point–Death, MI, and refractory ischemia at 48 hrs of Pts with unstable angina–who were already receiving aspirin, who were managed with either heparin–H or tirofiban–T–
a specific, nonpeptide inhibitor of platelet gpIIb/IIIa receptor. See Tirofiban.
McGraw-Hill Concise Dictionary of Modern Medicine. © 2002 by The McGraw-Hill Companies, Inc.

(prizm)
A transparent solid, with sides that converge at an angle, that deflects a ray of light toward the thickest portion (the base) and splits white light into its component colors; in spectacles, a prism corrects ocular muscle imbalance.
[G. prisma]
Medical Dictionary for the Health Professions and Nursing © Farlex 2012 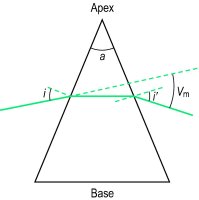 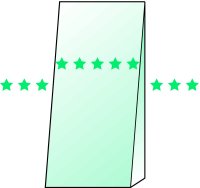 Feedback
Flashcards & Bookmarks ?
Please log in or register to use Flashcards and Bookmarks. You can also log in with
Flashcards ?
My bookmarks ?
+ Add current page to bookmarks
Mentioned in ?
References in periodicals archive ?
-- In several of the high-magnification micrographs, the fibrous, crystallitic nature of the enamel prisms and interprismatic material is evident, and prisms appear to be hollow (Fig.
Enamel ultrastructure of incisors, premolars, and molars in Thomomys, Cratogeomys, and Geomys (Rodentia: Geomyidae)
The enamel prisms of permanent teeth have an orientation essentially parallel to the dentinoenamel junction except for the cervical enamel where the prisms are oriented towards the exterior with an apical direction.
Adhesion to mild fluorosed enamel: a comparative study of two etching protocols
Enamel comprises about 95% of substituted hydroxyapatite crystals, arranged in bundles of enamel prisms 2-5 microns in diameter extending from dentine to the enamel surface.
Fluoride and the caries lesion: interactions and mechanism of action
The presence of high stress on the enamel adjacent to the cementoenamel junction (CEJ) may be explained by the fact that this is the region where enamel is the thinnest, by the arrangement of amorphic enamel prisms in this area, and by the weak union between enamel and dentine in the cervical area.
Stress distribution in the cervical region of an upper central incisor in a 3D finite element model