As radioactive elements disintegrate and form new chemical elements, a tremendous amount of energy is released. This emission of energy and nuclear particles is called radiation. The radiations may be electrically charged particles having size and mass, such as alpha particles and beta particles, or they may be nonparticulate and contain no electrical charges, such as gamma rays. Most radioactive elements give off either alpha or beta particles and at the same time emit gamma radiation.
formed e's of the blood the blood cells.
trace element a chemical element present or needed in extremely small amounts by plants and animals; such elements include manganese, copper, cobalt, zinc, and iron.
Miller-Keane Encyclopedia and Dictionary of Medicine, Nursing, and Allied Health, Seventh Edition. © 2003 by Saunders, an imprint of Elsevier, Inc. All rights reserved.

(el'ĕ-ment),
1. A substance composed of atoms of only one kind, that is, of identical atomic (proton) number, that therefore cannot be decomposed into two or more elements and that can lose its chemical properties only by union with some other element or by a nuclear reaction changing the proton number.
2. An indivisible structure or entity.
3. A functional entity, frequently exogenous, within a bacterium, such as an extrachromosomal element.
[L. elementum, a rudiment, beginning]
Farlex Partner Medical Dictionary © Farlex 2012

Informatics
A section of text in an XML document delineated by start and end tags, or, in the case of empty elements (elements with no content, only attributes), indicated by an empty tag.
Segen's Medical Dictionary. © 2012 Farlex, Inc. All rights reserved.

(el'ĕ-mĕnt)
1. A substance composed of atoms of only one kind, i.e., of identical atomic (proton) number, which therefore cannot be decomposed into two or more elements, and which can lose its chemical properties only by union with some other element or by a nuclear reaction changing the proton number.
2. An indivisible structure or entity.
3. A functional entity, frequently exogenous, within a bacterium, such as an extrachromosomal element.
[L. elementum, a rudiment, beginning]
Medical Dictionary for the Health Professions and Nursing © Farlex 2012 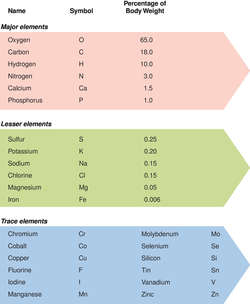 Any of those elements for which laboratory animals seem to have tiny dietary requirements, typically less than 1 µg/g. Elements in this category include arsenic, boron, bromine, cadmium, chromium, fluorine, lead, lithium, molybdenum, nickel, silicon, tin, and vanadium.
Medical Dictionary, © 2009 Farlex and Partners

a pure substance consisting of only one type of atom, that cannot be destroyed by normally available heat or electrical energy.
Collins Dictionary of Biology, 3rd ed. © W. G. Hale, V. A. Saunders, J. P. Margham 2005

(el'ĕ-mĕnt)
Substance composed of atoms of only one kind that therefore cannot be decomposed into two or more elements and can lose its chemical properties only by union with another element or by nuclear reaction changing the proton number.
[L. elementum, a rudiment, beginning]
Medical Dictionary for the Dental Professions © Farlex 2012

http://www.drmdk.com/html/nutrition.html
More discussions about element
This content is provided by iMedix and is subject to iMedix Terms. The Questions and Answers are not endorsed or recommended and are made available by patients, not doctors.

Feedback
Flashcards & Bookmarks ?
Please log in or register to use Flashcards and Bookmarks. You can also log in with
Flashcards ?
My bookmarks ?
+ Add current page to bookmarks
Mentioned in ?
References in periodicals archive ?
* Noe Velazquez, Lords Park Elementary School in Elgin -- worked 14 years in U-46, most recently as assistant principal at Highland Elementary in Elgin.
Eight new principals take the helm at U-46 schools
During the transition period, which involves securing the school's identification number from the DepEd, West Crame Elementary School will be an extension of Pinaglabanan Elementary School, about 2 kilometers away.
Elementary school inaugurated for a second time in San Juan City
Holter, Ed.D., an elementary teacher for 30+ years, is currently a Gifted Education Specialist for Rockingham | County, VA.
change is good
Caption: Charles Smilinich, principal at Colonial Elementary School
Niagara Wheatfield's Smilinich named NYS elementary principal of the year
Controlling elementary and pre-elementary schools is responsibility of ministry of education and welfare organization.
Management in pre-elementary schools and elementary schools
The 2013 Raytheon-Engineering is Elementary Teacher Scholarship recipients are:
Raytheon announces scholarship recipients
ghairston@k12albemarle.org 1 $30,031.40 JRFH 2006-2007 Gloria Dei Lutheran School 2 $29,011.37 JRFH 2006-2007 Mill Run Elementary School 3 $26,301.44 JRFH 2006-2007 Twin Springs Elementary School 4 $24,160.34 JRFH 2006-2007 Spring Run Elementary School 5 $19,350.25 JRFH 2006-2007 Garrisonville Elementary School 6 $18,986.43 JRFH 2006-2007 St.
Hello bumpers!!!
Knowing the coal operations won't be moved or curtailed any time soon, some residents, including Wiley, have been begging the state to build them a new elementary school in the community.
A school in coal's shadow
Meeting Teachers' Needs: Usry has been organizing the induction program for the past three years at the elementary school, but this school year marks the first year the district's middle and high schools are participating in the program, which often begins two weeks before the start of school.
Keeping new teachers happy
However, in our case, two major factors (distance and time) determined the redesign of the experience: The elementary school was located approximately twenty minutes from the university and the class time for the course was only eighty minutes.
Reading partnerships for teacher candidates
Therefore, at the elementary level, Minnesota program models tended to stress psychological development arguably antecedent to, and supportive of; adolescence career development (Borow, 1964).
How collaboration and research can affect school counseling practices: the Minnesota story
The collaborative work of elementary school classroom teacher Bev Wirt, elementary school reading specialist Carolyn Domaleski Bryan, and elementary school reading specialist Kathleen Davies Wesley, "Discovering What Works For Struggling Readers: Journeys of Exploration with Primary-grade Students" focuses upon the five teaching principles found to be consistently effective with elementary school students having difficulty in acquiring basic reading skills.
Discovering What Works For Struggling Readers